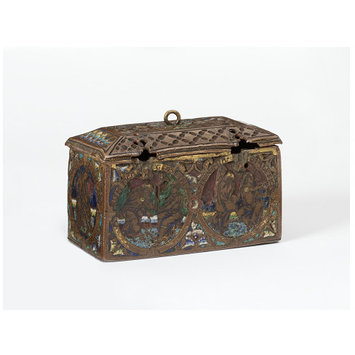 This casket depicts personifications of the Liberal Arts (Grammar, Rhetoric, Logic, Arithmetic, Astronomy, Geometry and Music) along with Nature and Philosophy. The Liberal Arts were focal elements of learning from the 11th century in the Cathedral Schools, through to the early Universities of the 13th century.

Personifications of the Liberal Arts were depicted thoughout the Medieval period using fairly standard devices. This casket however, is unique in its methods of representation. For example Rhetoric, usually depicted as a woman (the Latin retorica is feminine), is here shown as a man. He holds scales as a symbol of his art, a symbol more commonly associated with the Cardinal Virtue, Justice.

This object displays great technical skill. The artist has used translucent and speckled glasses with a wide range of mixed enamels. The vividness and movement in the depiction of the characters is considered by some to be an expression of Gothic naturalism at its height.

The Liberal Arts Casket, in the form of a rectangular box with hipped roof and decorated with champlevé enamel depicting the Liberal Arts with 'Philosophia' (Philosophy) and 'Natura' (Nature). The casket is constructed of many copper plaques. It has a raised lid with a clasp, which was originally on two hinges. A suspension ring (not original) is fixed in the centre of the lid.

The roof is decorated with geometric floral patterns amid trefoils and quatrefoils. The sides of the casket have six medallions depicting personifications of the seven Liberal Arts, Philosophy and Nature. The borders of each medallion contain Latin rubrics that identify each personification.

On the front of the casket sits 'Grammatica' (Grammar). She holds a switch and her pupil, sitting to her left, holds a parchment. To the right are 'Rhetorica' (Rhetoric) holding scales and 'Musica' (Music) playing a psaltery.

The back of the casket depicts 'Aristmatica' (Arithmetic), who peers at a board and 'Geometria' (Geometry) who holds a pair of compasses. To their right 'Astronomia' (Astronomy) holds up an astrolabe with his back to the viewer and next to him 'Dialectica' (Dialectic) points to the right, an arrow emerging from her mouth.

The side panels show Philosophia seated and wearing a crown. She holds a sceptre and disc. On the other side Natura bares her breast to suckle 'Scientia' (Knowledge) who kneels beside her.

Historical significance: Medieval interest in the liberal arts stemmed from the late Roman Authors. The Philosopher Boethius (480-524) divided the seven arts into two stages of learning; the trivium, (grammar, rhetoric, logic) and the quadrivium (arithmetic, astronomy, geometry and music). These stages were emphasised in the court of Charlemagne and became focal elements of learning from the 11th century Cathedral Schools through to the early universities of the 13th century.

The Liberal Arts were frequently depicted throughout the Middle Ages using fairly standard forms of representation. This casket however, has several unique and unusual aspects. Rhetoric, usually depicted as a woman (the Latin retorica is feminine), is here shown as a man. He also holds scales as a symbol of his art, a prop more commonly associated with the cardinal virtue, Justice. The arrow protruding out of Dialectic's mouth and the pose of Astronomy (his back turned to the viewer) are images with no other parallel in the Middle Ages. The depiction of Nature suckling Knowledge is also unique to this object.The unusual iconography of this piece leads us to question the meaning and purpose of the images. Images were often used in the medieval period as a substitute to text, as a visual reminder, or as an aid to the understanding of text. Images were thus depicted in a standard way to aid the viewer in his or her understanding. This casket however, challenges the conventional nature of medieval imagery. It is unclear whether the medieval viewer was able to use these images to interpret the inscriptions or, in contrast to medieval convention, he needed the inscriptions to interpret the images. The unparalleled representations upon this casket certainly suggest a very distinctive and personal commission.

The techincal skill of this object is unusual. The artist has used translucent and speckled glasses with a wide range of mixed enamels. The depiction of the characters is vivid and free, and considered by some to exemplify the full development of naturalism towards the end of the century.

The depiction of Philosophy crowned on this casket suggests that the Liberal Arts were believed to assist the study of Philosophy. The representation of Nature suckling Knowledge is unique and cannot be paralleled in manuscripts or in other media. It may indicate the origins of knowledge and understanding. The casket seems to represent the stages of learning from infancy (when Nature gives birth to Knowledge), through the structured education of the seven liberal arts, culminating in the pinnacle of intellectual knowledge: philosophical understanding.

CASKET
Champlevé enamel, partly translucent on copper gilt. On the front and back emblematic figures of the seven Liberal Arts; on the ends, Philosophy enthroned and Natural Science.
English; late 12th century [] 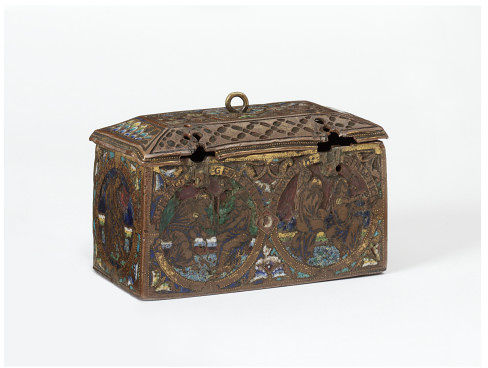