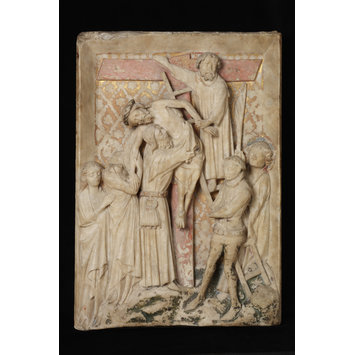 This alabaster panel shows the Deposition of Christ from the cross. The standing figure with the purse is Joseph of Arimathea, and he is accompanied by the Virgin (whose head has been lost), Nicodemus standing on the ladder and other figures. The male figure in front of the ladder would originally have been removing the nail from Christ's feet with a pair of pliers - both the pliers and his hands have been lost.

The panel comes from a set of five panels showing scenes from Christ's Passion, which would originally have formed an altarpiece. This was a particularly suitable subject for an altarpiece, illustrating Christ's sacrifice which formed the basis for the Eucharist celebrated during Mass at an altar. As a result, this subject was popular - about 30 alabaster panels showing the Deposition survive, of which we know that six were originally part of Passion altarpieces.

The panel has a chamfered edge on three sides, apart from the base. Christ is represented wearing a loin cloth and torse, with his feet still attached to the cross with a single nail. His body falls to the left, and is supported by a standing figure, wearing a long gown, and a purse hanging from his belt. This is Joseph of Arimathea, who faces to the right. Behind him stands the Virgin, wearing a gown and cloak, holding Christ's right arm. Her head is missing. Behind her is another female figure (Mary Magdalene or Mary Cleophas), who supports the Virgin at the waist with her right hand. Christ's left arm is held by the figure of Nicodemus, who stands on a ladder leaning down from the cross towards the right, and who steadies himself by holding on to the cross with his right hand. He wears a long gown. Behind the ladder, to the right, stands the beardless figure of St John the Evangelist, who has a halo, and holds a palm, steadying the ladder with his left hand. In the foreground, in front of the ladder, is a beardless male figure, who would have been removing the nail from Christ's feet with a pair of pliers. Both the pliers and his hands have been lost. He wears a buttoned doublet, with a low-slung belt, and hose, representing padded clothes, rather than the armour usual in the centurion often depicted. There are traces of green paint on the grass in the foreground, and the upper background is gilt, with the remains of a relatively unusual gessoed pattern of lozenges (parallel in a embattled Crucifixion in the Metropolitan (see Age of Chivalry catalogue entry for reference)). The cross is red-brown. The top left corner of the panel is chipped. The reverse has two holes plugged with lead.

Acquired in 1923 from a dealer living near Bordeaux. On loan to the museum from W.L. Hildburgh from 1923 onwards (with four other panels from a Passion Altarpiece), and given in 1946.

One of five panels making up an altarpiece with scenes from the Passion cycle (described by F. Cheetham as Altarpiece A). There are about thirty surviving panels showing the Deposition, of which we know that six were part of Passion altarpieces. 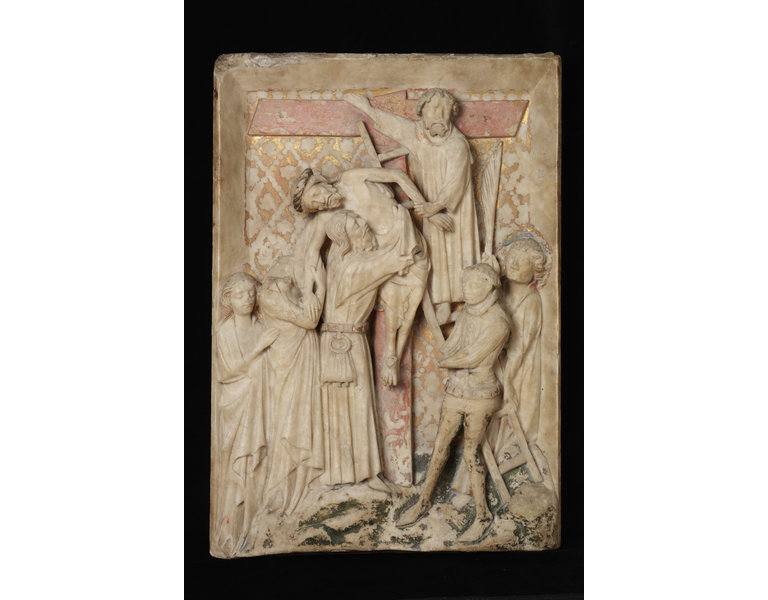