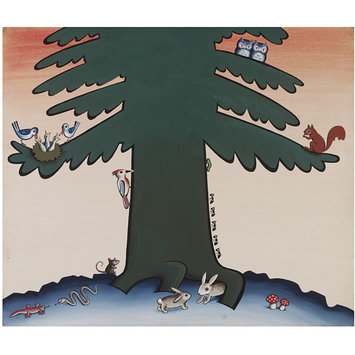 The Tree with Animals

Although he trained as an actor, Rolf Brandt enjoyed drawing and making collages. In his native Germany he developed an interest in Dada and Surrealism and in Bauhaus artists such as Paul Klee. He moved to London from Hamburg in the early 1930s with his brother Bill (1904–83), who became famous as a photographer.

This is one of nine illustrations that Brandt made for the children’s book The Story of a Tree by Stephen McFarlane. Charting the passage of a tree from forest to sawmill to carpenter’s workshop to toyshop, the images are a charming example of illustration for children at the end of the Second World War. Brandt’s interest in Surrealism is evident in some of the illustrations, especially the cover page, where the trees take on the forms of furniture and toys.

Gouache painting on thick paper pasted to brown cardboard support which has residual glue marks etc on back. Image is the trunk and lower branches of a pine tree painted in dark green against a pink sky (at top) fading to cream (lower down). The earth from which it grows is dark blue shading to pale blue at the lower margin of picture. Nesting birds, owls and squirrel in the tree; ants marching up the trunk, a woodpecker on the other sid of the trunk. Rabbits, snake, lizard and mouse and todstools on the ground. Tissue cover-sheet attached by sellotape to back alongleft margin.

Gouache on paper, on card support

'The story of a tree 2.2'
Inscribed in pencil just below the address

Gouache drawing: illustration no 2 from a set of 9 for 'The Story Of A Tree' by Stephen McFarlane

Illustration no.2 for 'The Story of a Tree' by Stephen McFarlane, published by Peter Lunn, 1946

In this illustration we see the mature tree - probably a pine - just before it is chopped down. Brandt shows the tree as the home to many living creatures - birds nest in the branches, a squirrel eats the nuts (or cones), ants and caterpliiars climb the trunk, and rabbits burrow under the roots.

Gouache on paper, on card support

Given by the artist's children

This is the design for the second illustration for the children's book 'The Story Of A Tree' by Stephen McFarlane.( the first is for the cover) The eight other designs for illustrations are also in the collection.At the time of acquisition the designs were in a wrapper labelled with the titles of the nine drawings. It was not clear if these had been assigned by artist, publisher or artist's family. 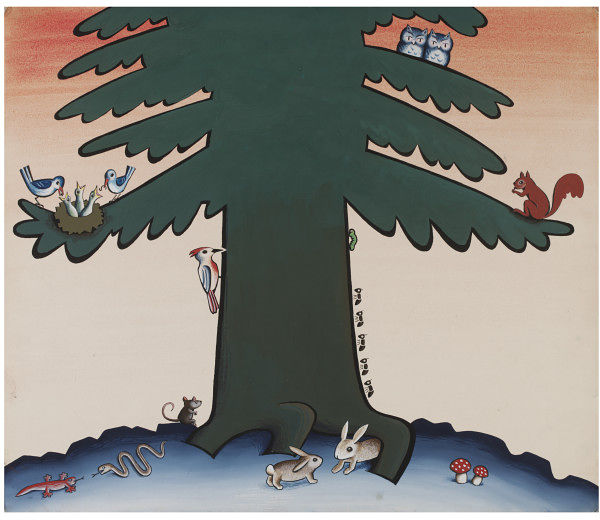