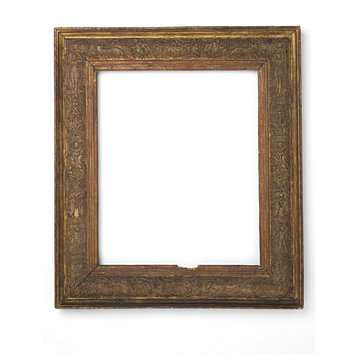 Separate wooden picture frames were used in Italy from about the 15th century, though they developed from earlier frames on altarpieces in both metal and wood. They were used to protect and enhance both secular and religious paintings.

As well as many picture frames acquired with paintings, the V&A acquired some frames - principally Italian Renaissance in origin or style - as independent objects. They were usually chosen for the fine quality of their carving and decorative effects, and many are gilded using various techniques. Many of the ornaments used are classical and architectural in origin.

The intricate ornament on this frame was created with a gesso paste (pastiglia) pressed into short moulds, then applied to the wooden structure of the frame. Although the surfaces are very worn, there is evidence of both water and oil gilding, and blue paint on the outer moulding.

Structure
The frame is made up of a back fame and a front frame made of softwood. The back frame is roughly finished with lost knots and is half lap jointed. At the back, the vertical members are lapped over the horizontal members. The front frame includes the sight edge moulding and is mitred. The outer moulding is mitred and applied.

There is a lot of wood boring beetle larvae damage and wood loss to the bottom sight edge at the centre.

Description of Ornament
The cushion frieze is decorated in pastiglia with intricate grotesque ornament. The sides are decorated, from the top down, with masks, swags, standing female figures, cornucopia, dolphin heads, trophies, winged putti standing on a plinth marked with SPQR and winged caryatids. The top and bottom are decorated with lions and male half figures each holding a spear and shield, centred on a cartouche containing a reclining nude female with a spear.

Inscriptions
At the top, ‘RM’ is inscribed in black on the back.

Decorative Finish
The cushion frieze ornament is cast and applied pastiglia. On the left and right, the lengths of relief decoration are cast from the same mould. Each length runs from the top to the bottom edge of the frieze and covers the mitres. The diagonal cracks through the cast work at the corners have appeared as a result of movement in mitre joints in the wood below. The top and bottom lengths are placed between the side lengths and are cast from a different mould. At the top and bottom of the frieze, the vertical joins in the cast work can be seen near the corners. At the top corners, a rectangular piece of relief decoration with masks and drapery has been set into the cast work.

There is one painted and gilded finish. The inner and outer mouldings are water gilded on an orange-red bole on a thick gesso ground. Fragments of blue paint are visible on the outer moulding.

On the cast work, there are very small fragments of mordant gilding which is cupping. The surface has a grey-white appearance and is quite degraded and very dirty.

Samples of the cast work and of the blue paint were analysed (analysis carried out by Dr Brian W Singer, Northumbria University). Both samples were taken from an area of damage on the bottom right hand corner.

Polarised light microscopy of the cast work indicated that mainly gypsum was present. Infra red analysis also showed gypsum to be present with very little medium. GC-MS analysis was carried out to try to determine the nature of the medium mixed with the gypsum and results indicated the presence of animal glue and a small amount of egg. The egg may have been mixed in with the animal glue. Alternatively, the egg may be in the layers on top of the gesso. There is also a trace of drying oil and a trace of another source of palmitic acid in the glue, perhaps fats. Polarised light microscopy identified the blue as smalt with small amounts of gypsum and chalk. Gypsum probably came from the surrounding pastiglia decoration and chalk from the layers from the surrounding gilded areas.

Hanging Device
At the back top centre there are several holes. Two of these are drilled diagonally and emerge at the top edge. These were possibly used for a cord or ribbon hanging. The three holes at top left and right and bottom centre are from modern mirror plate fixings.

Bought for £57 from Stefano Bardini, Florence

Conclusion and Observations (taken from Powell and Allen, 2010)
The frame is thought to have contained a painting.

With the amount of wear and damage present, it is difficult to say what the frame’s original appearance would have been. The combination, however, of both oil and water gilding, blue paint and the intricate raised decoration, suggest it would have had a highly decorative finish.

The combination of gilding, blue paint and cast work can be seen on pastiglia decorated caskets, see for example V&A Museum No. W.23-1953, a pastiglia box with scenes from Roman history, Ferrara or Venice, 1500-1550 (see Ajmar-Wollheim, M. and Dennis, F. At Home in Renaissance Italy, London: V&A Publications, 2006. p.108, fig, 7.3) which has water gilding on red bole and blue paint on the bottom moulding of the casket. The blue paint was examined (unpublished Analysis Report 06-46-LB casket W.23-1953 by Dr Lucia Burgio, V&A Science Section, Conservation Department)
under a stereo microscope and it appeared to be made of a thin layer of dark blue azurite on white background. The sample was later dispersed and analysed under a polarized light microscope. The presence of mineral azurite was confirmed.

A similar frame 26 x 23 x 4 1/2" was with Wiggins (London frame dealers) in 1986, which used the same decoration that is seen on the stiles of 11-1890 on all four sides (photograph in Furniture section local records).

'A good example of a relatively untouched frame with the same moulded ornament of grotesque creatures, winged or classical figures, arabesques and cartouches...The decoration is made from two different moulds, one for the top and bottom rails and one for the two long sides...
...the ground of the pastiglia ornament... might have been coloured blue, and the figures and arabesques would have been picked out in gold; if this were the practice, it would give a startingly rich and jewel-like finish...' 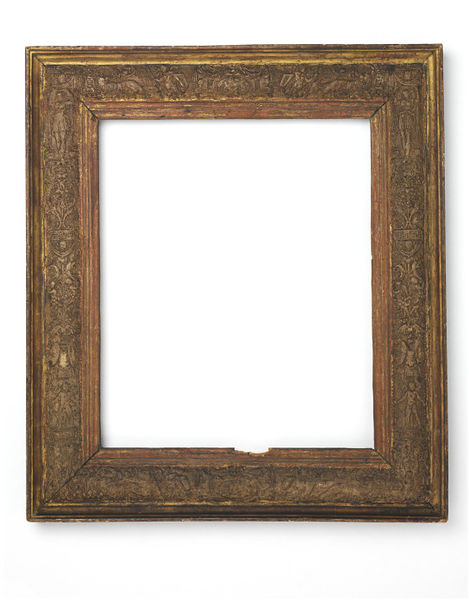