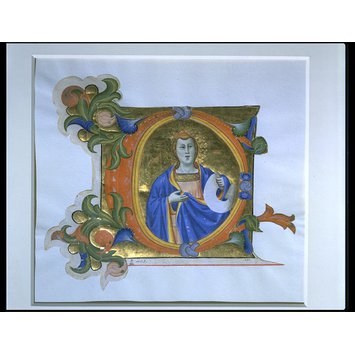 Santa Maria degli Angeli in Florence, a monastery of the Camaldolese order, was the home of a number of scribes, painters and illuminators in the fourteenth and fifteenth centuries. They worked both for their own house and for other churches and even secular customers. Silvestro dei Gherarducci (1339-99) was active as a painter and illuminator in the abbey from the 1370s, though he also acted as sub-prior and prior. He illuminated works not only for Santa Maria degli Angeli but also for a Camaldolese house in Venice, San Michele a Murano. At this time, Venice was not a centre of illumination. In 1401, Dominican nuns wanting advice on the making of books were told by Giovanni Dominici, a Dominican from Florence, to study the choirbooks of Santa Maria degli Angeli, which contained Silvestro’s work. Silvestro may have worked as part of a team with some ornamentation done by others. Illuminators such as Belbello of Pavia and Cristoforo Cortese were later employed on the choirbooks and it is through their careers in Venice that compositions and styles developed by Silvestro dei Gherarducci became used in that city.

Cut-out historiated initial C, in orange, yellow, blue and burnished gold, taken from a Gradual. The initial has acanthus decoration stemming from it in blue, green, orange, pink and gold. Inside is a prophet holding a scroll, set against a gold background anddressed in a pink and gold tunic and a yellow lined blue cloak. The initial introduces a Communion hymn in the Mass for the third Sunday after Easter.

Made in Florence at the convent of Santa Maria degli Angeli, for San Michele a Murano in Venice. Bought before 1874 when it was transferred from the Art Museum.
A duplicate number MS.968 was assigned to this object in error and was subsequently cancelled.

Historiated initial C with a prophet, from a Gradual for the Camaldolese monastery of San Michele a Murano, Italy (Florence), 1392-1399.

Cut-out historiated initial C (Prophet), from a 14th-century choirbook made for San Michele a Murano in Venice.
Illuminated by Don Silvestro dei Gherarducci
Florence (monastery of Santa Maria degli Angeli) , 1392-1399
Bought by the Museum before 1363

Choirbooks from San Michele a Murano in Venice were systematically dismembered to provide images; single leaves survive, but also initials, as here, cut to shape. It is not known when the choirbooks were cut up. The Museum appears to have acquired this piece in the late 1850s; apart from this, other fragments first appear in the Bromley-Davenport Collection later in the 19th century. [1995] 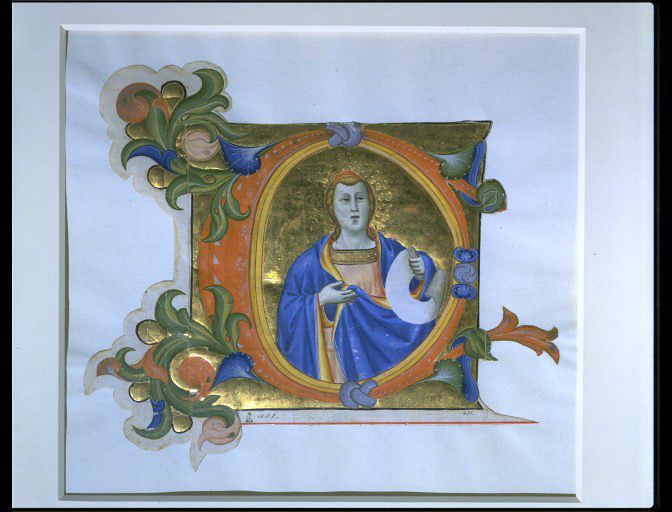