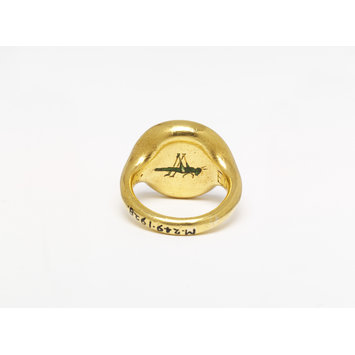 Sir Thomas Gresham was one of the great figures of Tudor England. He was a mercer, trading in woolen cloth, silks, velvets and tapestries between England and Flanders but also acted as royal agent in the Netherlands between 1551-1564, managing the foreign debt of the English crown. Gresham's success in reducing the debts of the monarch brought him a knighthood in 1559 and considerable personal profit. He cemented his reputation with a project to build London's first bourse for merchants, the Royal Exchange. He also founded Gresham College, an educational establishment which provided seven professors to lecture to students free of charge, one on each day of the week.

Gresham's badge was the grasshopper and this can be seen, brightly enamelled on the backs of a group of at least seven rings, one of which is in the Museum's collection. Each ring bears the coat of arms of a distinguished figure engraved in hardstone which has been painted and gilded on the reverse to show the arms in their proper colours. The Lee ring was given to the military engineer Sir Richard Lee by Thomas Gresham. Lee is chiefly remembered for his role in improving the British fortifications of Calais and Boulogne but also the siege of Edinburgh and subsequent sack of the city.

Of the surviving rings, one was made for Sir William Fleetwood and is now in the British Museum. A ring for Gabriel Goodman is in the museum at St Fagans, Cardiff and those for Jacques Wingfield and Robert Taylor are in private collections. A ring for Edmund Tremayne is part of the Barclays Bank Archive (it was previously held by Martins Bank). Another ring, said to be engraved with the Woodhouse family arms, was shown at the Society of Antiquaries, London in 1742 but has not been sighted since. There is also a passing reference to a ring with the arms of Charles Herbert in the files of the British Museum, but again, little more is known.

One recipient was Robert Taylor, one of the Tellers of the Exchequer. When Taylor received his grasshopper ring, he was at the peak of his fortune and influence. Using the considerable funds he had acquired through his work at the Exchequer, he bought the manor of Great Abington from the Earl of Oxford and in 1580, built a great mansion at Babraham Place. By 1588, he had lost most of his fortune after being held responsible for the embezzlement of £7500 from a locked chest at the Exchequer by this servant William Raven. Although he was eventually pardoned by Elizabeth I, he sold Babraham Place to Sir Horatio Palavicino and never regained his former standing.

We do not know exactly why Gresham presented these rings. They appear to have been made by different goldsmiths over a period of twenty years, from the earliest ring, dated 1557 to the latest surviving ring which was dated 1575. They were expensive and highly fashionable gifts - perhaps the sight of the ring with its secret grasshopper badge served to remind the recipients of Gresham and their ties to him?

Gold signet ring, the oval bezel set with a foliated crystal engraved with the arms of Sir Richard Lee (d.1575) of Sopwell, near St. Albans. Behind the bezel is a grasshopper, enamelled in green, the badge of the financier, Sir Thomas Gresham (d.1579) and the motto 'FLAME. ET. FAME.'

ex Waterton Collection. Sir Thomas Gresham gave a number of these rings to his friends, all bearing his grasshopper badge but each having the arms of the recipient.

A copy of this ring, hallmarked for London, 1970 was sold by Christie's South Kensington, Tuesday 9 October 2012.

Gold signet ring, the oval bezel set with a reverse painted, gilded and silvered chalcedony intaglio engraved with the arms of Sir Richard Lee (d.1575) with an enamelled green grasshopper behind, the badge of Sir Thomas Gresham (d.1579) and a motto. England, 1544-1575


Treasures of the Royal Courts: Tudors, Stuarts and the Russian Tsars label text:

The bright green grasshoppers enamelled on the
backs of these rings are the badge of the financier
and merchant Sir Thomas Gresham, who gave rings
to his business associates engraved with their coats
of arms and mottoes. These rings were gifts to the
military engineer Sir Richard Lee and Robert Taylor,
one of the Tellers of the Exchequer. 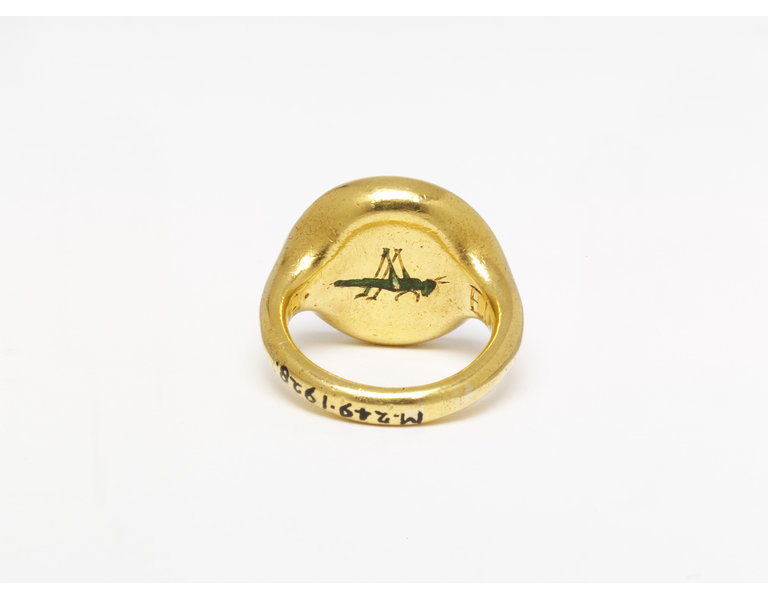