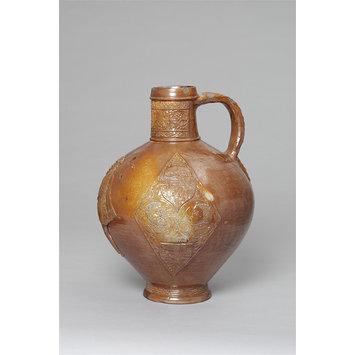 This pitcher would have stored wine or water to be poured into glasses for the dining table. It was made in the village of Raeren, then in Germany but now just across the border in Belgium. The workshop of the potter, Jan Emens Mennicken was well known for its technical mastery and innovation in the design of vessel forms and decoration. Raeren wares were the most commonly-traded of German stonewares in the early 16th century but from the middle of the century, the Mennicken pottery concentrated more on highly-decorated, more expensive and prized wares which were sold to the German middle and upper classes. This grand vessel was made in 1573 and bears the royal arms of both Philip II of Spain and those of Charles IX of France. In 1570, the two Roman Catholic kings married the sisters Anne and Elizabeth (respectively) of Austria, and Philip supported Charles' assassination of the leading French Protestants in 1572 in the infamous St. Bartholomew's Day Massacre.

Large globular pitcher with strap handle in dark grey stoneware with dark brown wash under an overall lustrous salt glaze. The cylindrical neck is surrounded by an applied frieze with leafy decoration between two running vine bands and the date 1568 in low relief. The body of the vessel is dated 1573 and bears the potter's initials, 'IM'. On each of the two sides is a large applied lozenge, moulded in low relief, containing crowned shields-of-arms separated by two portrait roundels. In the centre of the body is applied a full-length portrait of a King, next to which is a small applied shield with the (closed) crowned arms of France (three fleurs-de-lys).
The arms on the lozenges are those of Spain above and Austria below. The portrait roundels are, on the left a bearded male bust facing right with the initials "K F", "D G" and "IM 15", and on the right a female bust facing left with the initials "N (reversed) M 73". The busts are thought to represent Philip II of Spain (1556-98) and Anne of Austria (1549-80), his fourth wife whom he married in 1570. The full-length portrait is probably intended to represent King Charles IX of France (1550-74) - there are similarities in his appearance and dress to a 1566 portrait by Francois Clouet.

This object was made in what was at the time Germany. The village of Raeren is 12 km. south-east of Aachen between the rivers Rur and Meuse, and is now in Belgium, 1 km from the German border. The area was ideal for making pots, being rich in stoneware clays and abundant sources of water and wood. Output was prolific in the 15th to 17th centuries and the potteries catered for local demand as well as exporting to north-west Europe.

The pitcher was formerly in the Weckherlin Collection, objects from which formed the core of the South Kensington (now V&A) Museum's German stoneware collection on their acquisition in 1868. The Weckherlin Collection was acquired by a fellow Belgian, the art dealer, publisher and patron of the Pre-Raphaelite painters, Jean Joseph Ernest Theodore Gambart who came to London in 1840 and took British citizenship in 1846. He displayed the collection in his London house "Rosenstead", Avenue Road, near Regent's Park, until a gas explosion caused him to reconsider the long-term security of his remaining pots - he sold 62 objects to the Museum for £800. This pitcher was then worth £25.

Historical significance: Potters from Langerwehe are thought to have moved to Raeren in about 1400 and potting was well-established there by 1480s. In the 1525-50 period, Raeren wares were of all German stonewares the most frequently traded through Netherlandish ports. There was demand for these vessels across north-west Europe. From about 1540, when the potters of Raeren and its vicinity began to form themselves into an association which later became a guild, the pots began to be decorated with ornate and detailed applied moulded relief decoration. This made the pots more desirable still and enabled the potters to export fewer general wares and charge a higher price for decorated wares which were aimed at the local middle to upper class market. A grand decorated pot such as this pitcher was destined for a family of high social status. Raeren retained prominence in such wares until the early 17th century. This key phase was led by the Mennicken (or Menneken) family of whom the most prolific was Jan Emens Mennicken (1540-93) who signed his wares IE, JE, YE, IEM, JEM or YEM from 1566. His workshop continued to use these and other marks until 1613 (long after his death). About 180 of his vessels are extant. He developed the baluster-shaped jug with cylindrical neck and body panels for friezes, and the grey rather than brown body painted with zones or highlights in cobalt-blue (known as Blauwerk) from 1580s. He is famed for his technical mastery and innovation.
The Spanish arms on this pitcher are perhaps explained by Raeren's position on the edge of the Spanish Netherlands. When it was made in 1573, Spain had been at peace with France since the Peace of Cateau-Cambresis of 1559. The pitcher bears Philip II's arms as well as a portrait and arms of a French King, most probably Charles IX whose short life was to end because of tuberculosis in 1574. It is worth noting that Philip's 4th wife Anne of Austria, whom he had married in 1570, was sister to Elizabeth of Austria (1554-92) who married Charles IX also in 1570. Both kings were Roman Catholic and the pitcher was made just a year after the infamous St. Bartholomew's Day Massacre when Charles authorised the killing of the leading French Protestants who had previously encouraged him to take up arms against Spain on behalf of the Netherlands.

This grand stoneware pitcher was a serving vessel for wine or perhaps water. Such vessels were sometimes depicted as being kept cool during a meal in a wine cooler (large basin of cold water) on the floor to the side of the dining table. When glasses needed to be replenished, a servant would pour from the pitcher then replace it again in the wine cooler until needed once more.

Large globular pitcher with strap handle, salt-glazed stoneware with applied frieze on neck, applied lozenges with portraits and heraldic arms and on front, an applied full-length portrait of a King and shield with the crowned arms of France. 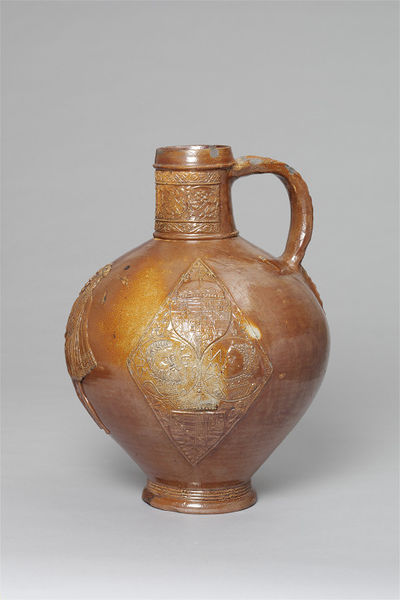