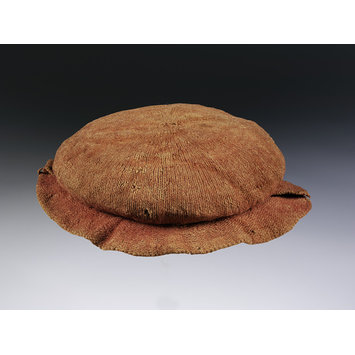 This closely knitted woollen cap has lost its original heavily felted surface and its dashing red colour. Both texture and colour imitated those of the more expensive silk velvet bonnets that were fashionable. Its size suggests it may have belonged to a young boy or an adult with a smallish head; it was fashionable to wear the cap resting on the side of the head rather than pulled down over it. The drawings of the artist Hans Holbein the Younger (1497/8-1543) show how such caps were worn.

A large number of 16th-century knitted caps, most of highly fashionable shape, have been discovered in Greater London in building sites. The location of the finds allied to the fact that the caps are knitted, suggests that they were not intended for the upper strata of society, but rather for the middle classes.

This cap was found along with eleven others in an old house in Worship street in the city of London.

Cap for a man or woman of wool yarn, handknit in the round and then fulled, in the split-brim style. It has a single layer brim, in reverse stocking stitch; the crown is knit in stocking stitch. Some of the cap's original red colour (possibly dyed with madder) remains. The remains of strings are attached on each side, and were probably to be tied together over the top of the crown.

Historical significance: In England, the manufacture of caps was of sufficient importance to merit control by Act of Parliament from 1488 onwards. The 'Cappers Act' of 1571 stated that every person above the age of six years (excepting 'Maids, ladies, gentlewomen, noble personages, and every Lord, knight and gentleman of twenty marks land') residing in any of the cities, towns, villages or hamlets of England, shall wear on Sundays and holidays (except when travelling), 'a cap of wool, thicked and dressed in England, made within this realm, and only dressed and finished by some of the trade of cappers, upon pain to forfeit for every day of not wearing 3s. 4d.'. This act was intended to keep domestic production alive, as caps were outmoded by this date and there was a danger that a fall in demand for them would have a detrimental effect on the makers. (From Statutes at Large, vol vi, p 288, quoted in Textile History, vol 1, 1971; article by S M Levey: Illustrations of the History of Knitting Selected from the Collection of the Victoria and Albert Museum).

This cap is fairly small, and, as a result, it has always been assumed that it belonged to a boy. Evidence from drawings of the 1530s by Hans Holbein the Younger (1497/8-1543) suggest that this assumption may not necessarily be accurate. In these drawings the rounded caps worn by adult men are relatively small, worn off centre, on the side of the head rather than resting on top of the head. Nonetheless, the head for which this cap was intended was not large. An alternative explanation of its size is the possibility that it might have shrunk over the hundreds of years of its existence. There is however no obvious sign of shrinkage.

Knitted or felted caps were designed to be warm and waterproof, some protected the neck, some had ear flaps and many were trimmed with ribbons to imitate expensive silk versions. Wealthy Londoners would have worn European fashionable bonnets / caps of silk velvet decorated with ostrich feathers, aglets and brooches. Knitted caps were heavily felted so that their surface texture imitated velvet. Wool absorbs colour easily, so many caps were dyed in strong colours, such as red and black which were fashionable at the time. A large number of 16th-century knitted caps, most of highly fashionable shape, have been discovered in Greater London in the early 20th century during building works. The context/location of the find and the fact that the caps themselves were knitted suggest that they were not intended for the upper strata of society, but rather for the middle classes. 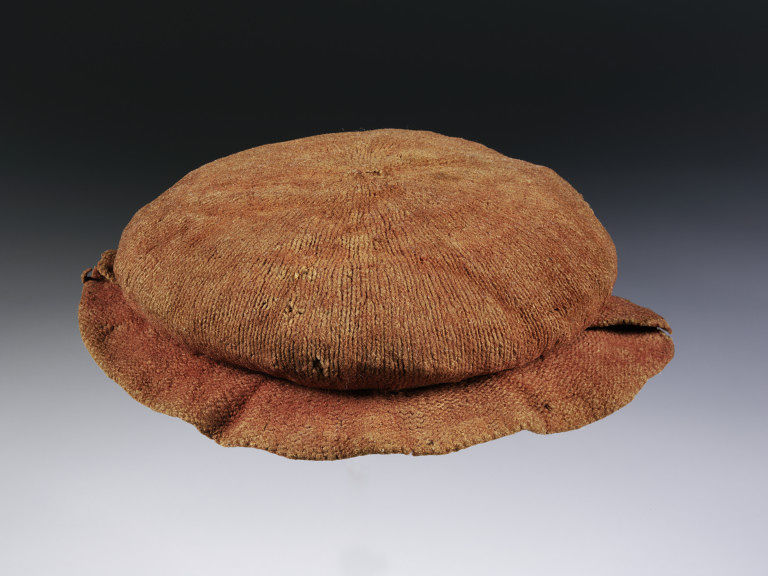