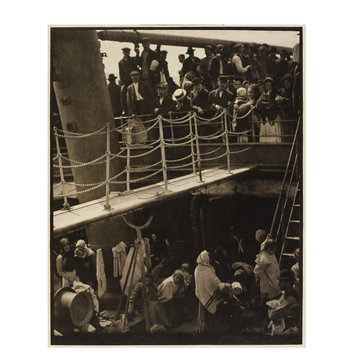 Black and white photograph showing segregation of poor men and women on lower deck of boat with bridge to upper deck for middle class people.

After Stieglitz’s death, O’Keeffe went through his photographs and put one print of every mounted photograph into the key set, which she subsequently gave to the National Gallery of Art, Washington. She determined that a photograph had to be mounted to be considered for the key set because she knew that for Stieglitz a photograph was not completed until it was mounted and that this was evidence that he was satisfied with the print. Duplicate mounted prints were than dispersed to 13 others museums.
However, there were a number of photographs in Stieglitz’s possession when he died that were not mounted. Some of these were very poor quality prints, and these have now been put into a study collection that will be given to the NGA. Others, however, were quality good, often excellent prints that had not been spotted, and these are the works that the O’Keeffe Foundation is now dispersing.
Before these photographs were sent to any institutions, the O’Keeffe Foundation, wisely, decided that they should be conserved (this was pretty consolidation). And they determined that the photographs should be mounted on boards of similar colour and texture and identical size to the comparable prints in the key set.
Stieglitz was adamant about his mounting: the size, colour, texture, and placement of the photograph on the board were critical issues to him . To be true to the spirit of the gift, you should try, at all costs, to preserve the sizes of Stieglitz’s mounts, even though you will end up with some odd-sized frames.
(Correspondence Sarah Greenough with Mark Haworth-Booth, June 2003)

The Steerage shows immigrants returning to their European homelands on the steerage level of the fashionable ship Kaiser Wilhelm II, the one which Stieglitz sailed to Europe in 1907.
Stieglitz recalled 'The scene fascinated me: A round straw hat; the funnel leaning left, the stairway leaning right; the white drawbridge, its railings made of chain; white suspenders crossed on the back of a man below; circular iron machinery; a mast that cut into the sky, completing a triangle. I stood spellbound for a while. I saw shapes related to one another - a picture of shapes, and underlying it, a new vision that held me: simple people; the feeling of ship, ocean, sky; a sense of release that I was away from the mob called "rich." (Quoted in Norman, Dorothy. Alfred Stieglitz: An American Seer. Middleton, N.Y.: Aperture, 1973 p. 76.).
The Steerage is the photograph Stieglitz said he would want to represent him if he could choose only one. He felt that this spontaneous photograph perfectly captured related shapes as well as human feelings. 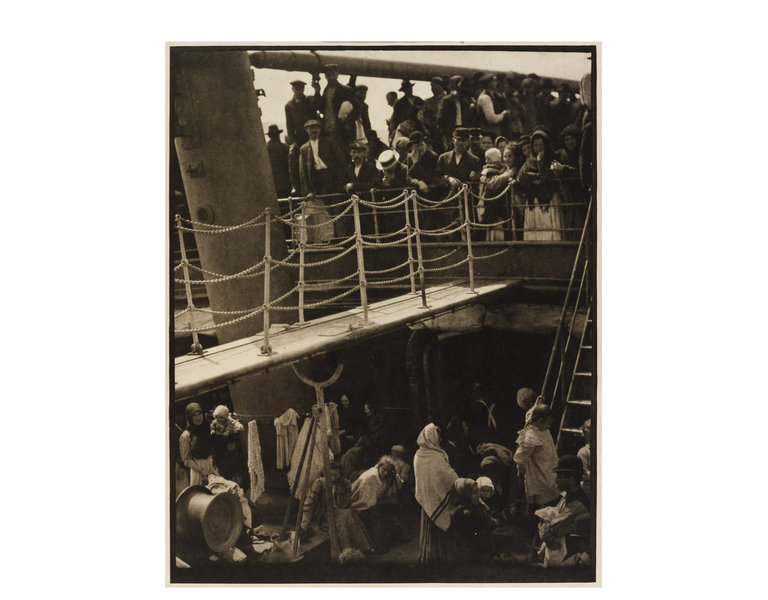