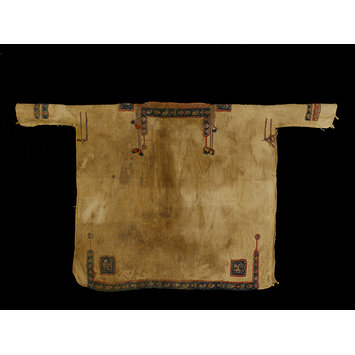 The custom of burying the dead fully clothed and wrapped in multiple layers of fabrics began in Coptic Christian communities in Egypt in the 3rd century AD.

This natural-coloured wool tunic with tapestry woven ornaments was for a young child. Its decoration suggests it was a more formal tunic than some others found in graves, as it has a very full complement of ornaments: neck-bands, shoulder-bands, sleeve-bands, shoulder and skirt-squares and hem-bands with upturned ends. The side seams are left open at the top for the child's arms, but it is also equipped with narrow sleeves which could have been used as leading strings. However, the tunic is in a very good condition so it is possible that the little child never wore it in life.

Child's overtunic, woven in cruciform shape on the loom, of natural-coloured (now yellow) wool with woven ornaments in coloured wools and undyed linen thread. The wools are all S spun (possibly of local manufacture). The design is the same back and front although the back is now damaged by body fluids. The tunic has cuff bands, two square panels on the shoulders, a neck-border with pendant medallions, two squares at the bottom and a border round the hem with pendant medallions. The ornaments have a blue ground and are edged with red. They are woven with heads, animals, birds, flowers, circles and other symbols. There are three stripes of red and blue weft-twining on either side of the neck; they end in coloured pom-poms, and there are two more stripes of weft-twining at the armpits (these were utilised as guidelines when weaving and also reinforced the turns). The tunic has been woven from proper left side, with starting edge, to right, where warp ends have been twisted into a cord. The woven decorations are also woven left to right, and when made into a tunic, all face sideways. The blanket stitches in natural coloured wool along the neck- and hem borders, are not only decorative, but also strengthen the longer transition between tapestry weave and plain weave. The tunic is left open at the armpits.

Originally the tunic had a waist tuck. Marks of stitches and the remains of sewing thread show a tuck of about 14 cm. The tuck must have been let out prior to burial as the waste discharged from the body covers the whole textile.

Given by Major R. G. Gayer-Anderson Pasha (d. 1945) and Lt. Col. T. G. Gayer-Anderson, C.M.G., S.S.O., The Little Hall Lavenham, Suffolk. At the time of acquisition, five pieces of material for mending were noted in the Accession Register. The Major had corresponded with the V&A since October 2nd 1942, on which date he confirmed what had occurred during a discussion on his and his brother's collections. The said collections were evidently 'scattered (for safety's sake), and confused so that I am now in process of reassembling them here one after the other - and as I do so will forward them at intervals addressed to the Director, Victoria and Albert Museum, S. Kensington if this is in order'. The first items were to be the textiles, Mogul miniatures and Turkish silver. He continued, 'As you and I more or less formulated at our interview, my brother... and I would like the Victoria and Albert to take from each collection... whatever objects it may desire to add (1) to its standing and (2) to its "transport" and travelling collections.' The rest should be submitted to other museums or institutions in London or the provinces, and anything left over to the British Red Cross in London to be disposed of at their occasional sales of antiques. The brothers wished the museum to attach their names as joint donors, and to display the objects as far as possible. The first trunk was delivered on 12/10/1942 and consisted mainly of textiles. They fell into five categories: Oriental textiles (29 pieces), Oriental Garments (56 pieces), Persian and Turkish Lace Edgings (an assortment), ?European Lace (white and red) removed from late Turkish garments (scrolls), and Coptic Textiles (shirts and panels etc) in 7 packets (about 100 pieces in all). Particular value was placed on the Coptic textiles and ideally, the brothers wanted what the V&A did not keep to be passed on as a 'Gayer-Anderson collection' to one museum rather than split up. In a later letter (4/11/1942) he indicated that he would like the Manchester Museum privileged as he had already donated Coptic textiles to them, and he added the Kingston-on-Thames School of Art (Surrey County Council) as a possible beneficiary for the same reasons (18/06/1943).

Of the Coptic pieces, the Major wrote: 'It is regretted that most of these pieces are in an unwashed and unironed crude condition and will require treatment and setting up. This applies especially to the many complete or semi complete examples of SHIRTS'. He added a note explaining, however, that 'All these speciments have been soaked and all major impurities removed'. The contents of each pack are described roughly by number and size (1/10/1942). Miss Clayton of the Department of Textiles was to make the decisions about the textile donations, but this decision was shelved until after the War so that the Museum could compare the pieces with their own collection which was not currently available (Sir Eric Maclagan to the Major, 10/11/1942). Four years later, after the death of the Major, his brother reminded the Museum of its commitment to selecting textiles and passing on others (26/03/1946). Interestingly, the response from the Keeper of Textiles indicated that he was afraid that it might take a little time 'as a number of the Coptic pieces will have to be cleaned before we can form a just opinion about them'; in addition much of the collection was not yet back in the museum for the purposes of comparison and the department was short-staffed (George Winfield Digby, 29/04/1946). In December, the Keeper of the Manchester Museum wrote to investigate how far the V&A had progressed in their selection (R.U. Sayer, 2/12/1946). Early in 1947, the decision was made to retain nine pieces, including this child's tunic (2/01/1947). The other eight pieces are now V&A nos. T.8-19-1947. The remaining pieces were duly dispatched to Manchester with an indication that Kingston-on-Thames was next on the list. They had arrived in Manchester by 20/01/1947 and awaited attention from the specialist, Miss Laura Start. On 30 January 1947, James Laver wrote to Col. T. G. Gayer-Anderson to thank him and inform him of the action taken.
(RP 42/1027 and 4/502)

Note: The Major had worked in the Colonial Service in Egypt in the 1920s (Frances Pritchard, Clothing Culture: Dress in Egypt in the First Millennium AD. Manchester: Whitworth Art Gallery, 2006, p. 9).

Historical significance: Significant as a relatively rare survival of a child's tunic, with full formal decoration and in good state.

The construction of the tunic was similar for men, women and children: it was made in one piece, which was folded over the shoulders and sewn together along the sides. Sometimes the seam directly under the armpits was open - or both the sleeve seams and the side seams were open. A belt, woven, braided, knitted or tablet woven, was worn to hold the folds of the garment in place.

In the 4th century the technique was improved by weaving the garment in a single section with a slit for the neckline. The garment was woven lengthwise on a loom. Weaving started at the end of one of the sleeves and continued through the body section and then the second sleeve (as in this tunic). This technique required numerous warp threads on a very wide loom. The woven scenes were worked at same time as the base fabric. With the transfer of the Roman empire to Byzantium in 395 AD the sleeves gradually seem to have become narrower and the patterns richer. Woollen (rather than linen) tunics seem to have gradually become more common. Apart from the change in the sleeve fitting, the trunk volume increased. The tight sleeves held the masses of cloth in place.

In this example, the sleeves are incredibly narrow, and could have been used as leading strings (a way of holding on to a child, a little like reins), but would also have kept the wide tunic in place. The tunic is in very good condition given that it came from a tomb. Furthermore, many other preserved children's tunics show signs of wear and tear of life, and several have been repeatedly patched (maybe recycled from child to child). Indeed, this tunic may never have been worn in life. It is a formal tunic with a very full complement of ornaments - neck-bands, shoulder-bands, sleeve-bands, shoulder and skirt-squares, and hem-bands with upturned ends. The patterns of these bands and panels, with human heads, birds and animals in various colours on a blue ground, are imitated from the repeating patterns of a class of much favoured blue silk textiles, woven on the drawloom.

The original broad tuck at the waist of this example seems to have been let out just before burial (the body fluids cover the let down tuck uninterrupted), as the stitch marks are still evident and there are even remains of sewing thread, suggesting a quick unpicking. The waist tuck on children's clothes might fulfil a possible need for letting out to allow for growth, but in this case, it is likely the purpose was to cover the lower body of the dead child (the length of the tunic, with tuck in place, might suggest a boy - see similar tunic in Gothenburg: Erikson, Marianne, Textiles in Egypt 200-1500 AD in Swedish Museum Collections (Göteborg: Röhsska Museet,1997), pp. 84-91).

The custom of burying the dead fully clothed and wrapped in multiple layers of fabrics began in the 3rd century. Although found in graves, only a small number of tunics were actually made as funerary clothing and shrouds. Much of the clothing on corpses was not new, but there are also examples of not completely finished garments. The high mortality rate among children is reflected by the large quantities of children's clothing recovered from burials. 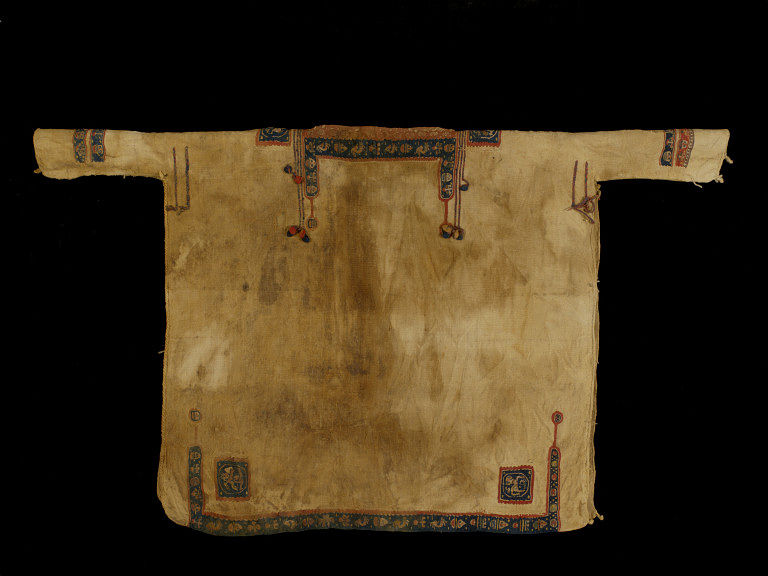