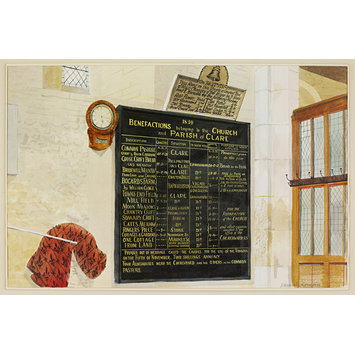 Kenneth Rowntree's crisp, colourful style, bordering on Magical Realism, is very much in evidence in this watercolour of the bellringer's chamber in Clare church. The church dates from the Norman Conquest and the beauty of its fifteenth-century nave and chancel are well known, but here Rowntree concentrates on the text of a notice board detailing early church donors. Rowntree often emphasised the written word in his pictures of churches and chapels; perhaps, as a Quaker unable to bear witness or testify, these texts held special import for him as 'found objects'. Indeed, in later years he acknowledged that 'words are what my work is really all about'.

A watercolour drawing of the interior of the bellringer's chamber in SS. Peter and Paul Church, Clare. A large black notice board detailing early donations to the church dominates the picture; light comes from a small high leaded window at left. A red cloth with a fleur-de-lys pattern is draped over a railing, lower left.

Watercolour and bodycolour drawing on paper

'Kenneth Rowntree'
Signed in pencil by the artist, lower right.

As is often the case in Rowntree's watercolours of church interiors for the Recording Britain scheme, the written word dominates the scene. This has been attributed to his Quaker beliefs and his attempt to translate them into pictorial terms. According to David Mellor, Rowntree, unable to testify or bear witness as a Quaker, may have thought of these words as objets trouves and wrote them out again. Indeed, Rowntree himself later said, 'I have come to realise that words are what my work is all about' (1990).
This work is from the 'Recording Britain' collection of topographical watercolours and drawings made in the early 1940s during the Second World War. In 1940 the Committee for the Employment of Artists in Wartime, part of the Ministry of Labour and National Service, launched a scheme to employ artists to record the home front in Britain, funded by a grant from the Pilgrim Trust. It ran until 1943 and some of the country's finest watercolour painters, such as John Piper, Sir William Russell Flint and Rowland Hilder, were commissioned to make paintings and drawings of buildings, scenes, and places which captured a sense of national identity. Their subjects were typically English: market towns and villages, churches and country estates, rural landscapes and industries, rivers and wild places, monuments and ruins. Northern Ireland was not covered, only four Welsh counties were included, and a separate scheme ran in Scotland.

Clare church was originally built after the Norman Conquest; most of the present building (the chancel, the nave, and the belfry) dates from the later fifteenth century. 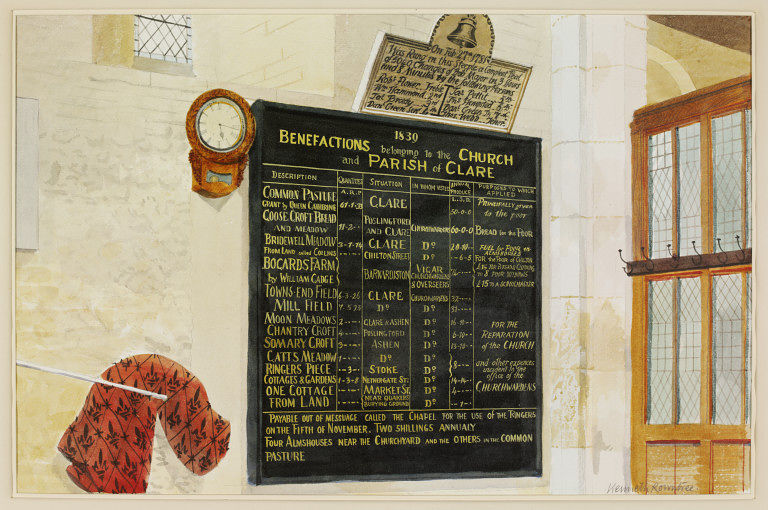