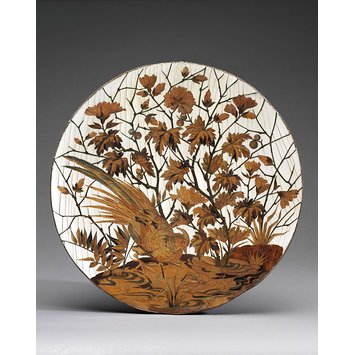 The marquetry is executed in the distinctive technique patented in 1874 by Pierre- Ferdinand Duvinage (1813-1876). Duvinage had taken over the distinguished firm of Maison Giroux in 1867, and following his death his widow Rosalie ran the firm. The very distinctive wares executed in 'Duvinage' marquetry were produced from c.1874 to c.1882.

The technique makes use of numerous small pieces of ivory, separated by bands of engraved brass to give the impression of a continuous ivory background panel, and combined with marquetry in a variety of woods. The use of many small pieces of ivory, rather than larger sheets, also allowed the marquetry to be executed on a curved surface, as on this tazza.

The marquetry is executed in the distinctive technique patented in 1874 by Pierre-Ferdinand Duvinage (1813-1876). Duvinage had taken over the distinguished firm of Maison Giroux in 1867. Founded around 1799 by Alphonse Giroux (c. 1775-1848), the firm dealt in artists' materials, prints and drawings, mechanical toys, ornaments and much else, and from the 1820s they manufactured furniture. In the 1830s they won medals at several exhibitions, and they consistently retained a highly fashionable clientele. However, the wares for which they are now best known are those made in this remarkable technique, patented by Duvinage and produced under his direction, and then under his widow Rosalie.

Duvinage deposited a first patent on 6 May 1874 for 'a kind of mosaic marquetry in metallic partitioning for furniture and art objects'. This process consisted of 'the combined union of ivory as base, wood, tinted or exotic, for designs or ornaments, and copper of other metal for partitioning the fragments of ivory'. Two additions were subsequently made to this patent in 1876. The first, in February, suggested replacing ivory with boxwood in imitation of 'ivory yellowed by ageing'. The second, in November, proposed enriching the decoration by adding 'appliqués in metal or other materials representing birds, animals, shrubs, flowers, foliage, fruits, etc., with incrustations of pearls or precious stones'.

Following Duvinage's death in December 1876, his widow Rosalie took out a patent on 4 June 1877, which mentioned few innovations compared with the original technique, other than the application of ornaments 'in mother-of-pearl or other materials of diverse tones' - although no examples of mother-of-pearl have been recorded. Conversely, wood marquetry, mentioned only as a possible variation in the 1877 application, features in the majority of extant pieces. An advantage (not noted in the application) of combining several small pieces of ivory, rather than using larger sheets, was that it allowed the marquetry to be applied to a curved surface - as on this tazza.

This model of tazza, with the same marquetry design, is known in a number of other instances: one example mounted with a silvered rim and supported by three silvered cranes is in the Detroit Institute of Arts (accession no. 1993.82; Kisluk-Grosheide, p. 162 and fig. 16); another is mounted as the top of a gilt-bronze guéridon in a private collection (ibid., p. 162 and figs 19-20). The present example may have been similarly mounted or incorporated in a piece of furniture, or it may always have been displayed as a picture with no practical function. It is possible that, but uncertain whether, the present ebonized frame is original.

Duvinage wares are as notable for their design as their technique: they draw inspiration from Chinese and Japanese motifs and materials. The style of wood marquetry seems also to be a conscious evocation of the work of André-Charles Boulle (1642 - 1732), and the ivory ground itself recalls the exceptionally rare ivory-ground marquetry cabinet of ca. 1660 - 1670 in the V&A, which is attributed to Pierre Gole (ca. 1620 - 1684; Museum no. W.38-1983).

In 1874 a new technique was patented. It combined traditional wood marquetry with copper threads against an ivory background. The materials and motifs reflected the European craze for the arts of China and Japan, but also evoked 17th- and 18th-century French marquetry. The fine cracks in the ivory are the result of gradual drying out. [01/12/2012]

This ornamental dish (tazza) is in the distinctive marquetry technique patented by Pierre-Ferdinand Duvinage on 6 May 1874. Following Duvinage's death on 16 December 1876, his widow Rosalie became the director of the business. Production may have ceased in 1882, the last year that Mme Duvinage directed the firm of Maison Giroux, or in 1884, the last year in which the firm is registered in the Paris Annuaire Almanach (in its last two years it was run by A. Philippe and E. Arnut). 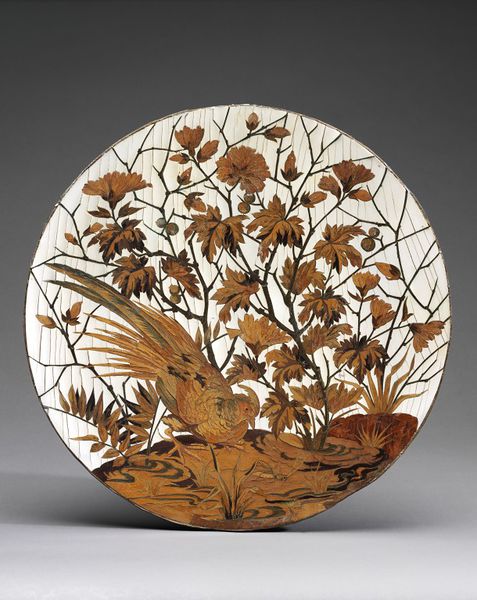