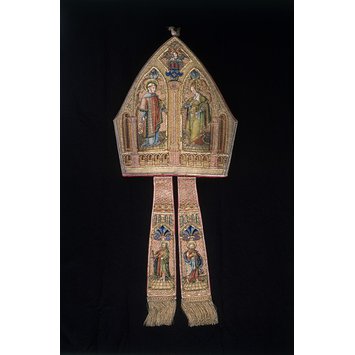 Mitres were established headgear for Christian bishops by the 11th century; they were also worn by the Pope (Bishop of Rome) and high-ranking abbots. By the 12th century they were usually made in white linen or silk, and often had figurative scenes showing saints. The style of this mitre falls within the final phase of this ornament's development, from the smaller and simpler medieval mitre into the more exaggerated 17th-century highly peaked version (similar to the version worn today). Traditionally, mitres fell into three classes: the mitra pretiosa, decorated with precious stones; the mitra aurifirigiata, embroidered sometimes with gold; and the mitra simplex which was plain.

In this case, the embroidered images refer to Christian iconography: the Virgin Mary, Saints Augustine (an early Father of the Church), Peter, Paul, Barbara and Leonard. All but St Leonard (from Limoges in central France) were widely venerated during the Middle Ages. He was less well-known, but had a following in England, France and Germany where he was considered the patron of prisoners. The choice of him as an appropriate saint for this mitre suggests that it was made for use in a church in one of these countries, probably France. An inscription in French inside the mitre states that it was made in 1592 and repaired in 1766.

Mitre, probably a linen ground, chiefly embroidered in gold threads, couched in the form of Gothic arches, under which stand human figures, their faces worked in fine silks in long and short stitch, and their draperies in gold threads whipped with fine coloured silks. On each side an angel supports a coat of arms, the fields of the shield in blue and red silks, couched down. On one side the figures represent the Virgin and St. Augustine, on the other St. Barbara and St. Leonard. The mitre has two lappets which are worked in a similar way to the mitre itself, with the figures of Saints Peter and Paul. An inscription in French inside the mitre states that it was made in 1592, and repaired in 1766.

Bought from James N Shoolbred Esq, of 12 Delahay St, for £100. The mitre had been on loan to the museum since 1875 according to a minute of 21 June 1881. It had been bought by Mr Shoolbred's grandfather, Mr Bullock in the USA. The grandfather had established Bullock's Museum in The Strand and built the Egyptian Hall in Picadilly. At the time that the mitre came into the museum it had written in it in French the note under Marks and Inscriptions. (Nominal file: Shoolbred, J.M. MA/1/S1629)

Historical significance: The historical significance lies in the fine quality of the embroidery, and in the fact that there is some element of provenance available from the inscription inside. The inscription suggests that the object was highly enough regarded in one hundred and fifty years after its creation to be repaired. Presumably such repairs were either to preserve it for posterity or to make sure it could go on being used for church ceremonial.

The style of this mitre falls within the final phase of this ornament's development, from the smaller and simpler mediaeval mitre into the more exaggerated seventeenth century highly peaked version (which is similar to the version worn today). Mitres were established headgear for bishops by the eleventh century, and were also worn by the Pope (Bishop of Rome) and high-ranking abbots. By the 12th century they were usually made in white linen or silk, and often had figurative scenes showing saints. They gradually became decorative rather than figurative, so that by the Renaissance their patterns were often quite secular in appearance. In this case the embroidered images do reference Christian iconography as the figures are of the Virgin Mary, Saints Augustine (an early Church father), Peter, Paul, Barbara, and Leonard. Traditionally mitres fell into three classes: the mitra pretiosa, decorated with precious stones, the mitra aurifirigiata, embroidered sometimes with gold, and the mitra simplex which was plain (Johnstone, pp. 16-17).

It is likely that such skilled needlework was executed in a professional workshop or in a convent. Embroidery workshops existed in large towns by the Renaissance, governed by guild rules over the training of apprentices, the preparation of embroidery materials and the execution of the needlework. In convents, nuns often exercised their needles in the service of the church by making vestments, as well as teaching girls the requisite skills of a well-brought up woman: embroidery, reading and writing.

The cult of Saints Augustine, Barbara, Peter and Paul, four of the saints embroidered on the mitre, was strong throughout Europe in this period; that of St Leonard was more geographically restricted to northern Europe (England, France and Germany). Little is know about him, other than that he was a hermit who founded a monastery in Noblac (now St Léonard) near Limoges in the sixth century. Returning crusaders took him on as the patron saint of prisoners (The Penguin Dictionary of Saints, 1965). The use of French in the text on the mitre would tie up nicely with a French cult and ownership for the mitre.

Flanders (the Spanish Netherlands) was under Spanish rule during this period and therefore part of the Counterrreformation, so forcefully championed by his most Catholic of Majesties, Philip II (d. 1598).

Mitres of this type are depicted in Spanish paintings, such as El Greco's Burial of the Count of Orgaz (Toledo Cathedral).

In accession register, originally thought to be French or German; date at which reattributed not clear. Thought to have come from 'some abbey in the Rhine' although apparently no documentation came with its purchase in the USA by the grandfather of the vendor to V&A. 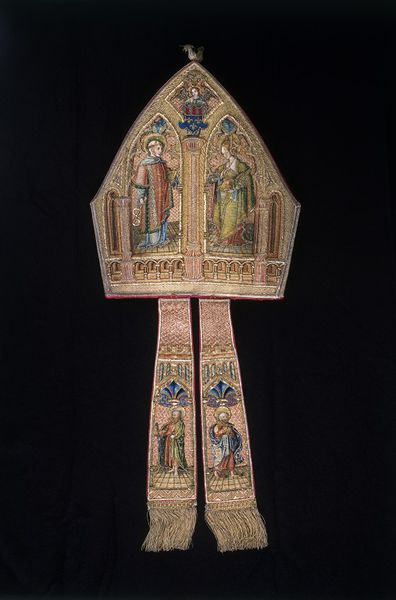