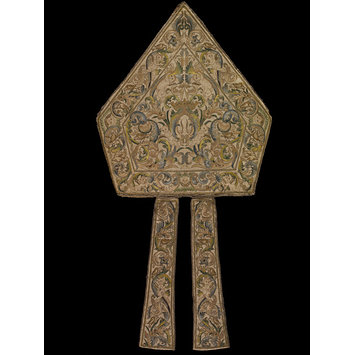 This 16th-century head-covering is a mitre, the established headgear for bishops by the 11th century, and also worn by the Pope (Bishop of Rome) and high-ranking abbots. By the 12th century mitres were usually made in white linen or silk, and often had figurative scenes showing saints. They gradually became decorative rather than figurative, so that by the Renaissance their patterns were often quite secular in appearance. In this case the embroidered images are positively secular, the only reference to the Christian faith being the hands holding palm branches in the centre of the decoration. The palm branch was the symbol of the triumph of faith over the suffering of martyrdom.

This mitre is thought to be Italian. It reputedly belonged to Cardinal Matteo Palmieri, Archbishop of Acerenza and Matera from 1518 until 1538. As befitted a man of his high rank and precocious abilities (he was elected Archbishop at the age of 25, under a special dispensation, as the canonical age was 27), the magnificent embroidery on the mitre is a true feat of virtuosity. The grotesque-style designs have been worked in silk embroidery threads, using a clever combination of long, short, satin and chain stitches, combined with different colours to create naturalistic shading. Such skilled needlework would no doubt have been executed in a professional workshop or convent.

Mitre with two lappets; exterior of white satin, embroidered in coloured silks and gold thread; interior skull cap, lining of mitre peak and of lappets in cream taffeta (badly damaged in the case of the skull cap and lappets); a layer of strengthening that supports the embroidery is visible through the damaged taffeta lining and comprises heavy printed paper, probably pages from a book. The outer layer of the back and front of the mitre and the outer edge of the lappets are ornamented with embroidery in an apparently secular pattern of closely arranged acanthus scrolls, supported by winged, naked cherubs; birds rest on the leaves. The pattern is symmetrical about a vertical axis, with the central motif being a pair of disembodied hands holding palm branches (usually the symbol of martyrs) and surmounted by a coronet whose spiked points end in fleurs de lys. The rest of the composition is built out from this central motif and is light-hearted in feel, a simple form of the grotesque style. The outer edge of the mitre is outlined with a plaited tress of metallic threads.

The silk embroidery threads are used to create clever, naturalistic shading through the use of long and short stitch, satin stitch and chain stitch in two shades of blue, two of pink, two of green, yellow; black is used for eyes and noses. Gold thread is couched down; in the case of the birds, the couching thread is black.

Through the shattered lining it is possible to see printed pages of paper, which act as stiffening inside the mitre; some of the text is in Spanish, some in Latin. See Curator's note.

According to the report on objects received from Charles Fairfax Murray Esq., 25 Hugh Street, London SW, this mitre once belonged to Cardinal Andrea Matteo Palmieri. Palmieri was Archbishop of Acerenza and Matera from 1518 till his death in 1537. George Wallis and Mr Thompson examined and recommended the piece which they believed a good example of embroidery and ecclesiastical dress of the 16th century and the price was reasonable. From correspondence in this file, it is clear that Fairfax Murray had lived in Florence for some time at the beginning of the 1880s and continued to sell Italian artefacts to the museum into the 1890s.(RP 4072/1887)

The work is somewhat similar to that in Dalmatic 269-1880, according to the accession register.

Historical significance: The interest in this object lies in the excellent quality of its embroidery and in the fact that it can be linked to Cardinal Palmieri, Archbishop of Acerenza and Matera.

The style of this mitre falls within the intermediate phase of this ornament's development, between the smaller and simpler mediaeval mitre and the more exaggerated seventeenth century highly peaked version (which is similar to the version worn today). (Johnstone, pp. 16-17). Mitres were established headgear for bishops by the eleventh century, and were also worn by the Pope (Bishop of Rome) and high-ranking abbots. By the 12th century they were usually made in white linen or silk, and often had figurative scenes showing saints. They gradually became decorative rather than figurative, so that by the Renaissance their patterns were often quite secular in appearance. In this case the embroidered images are positively secular, the only reference to Christian iconography being the hands holding palm branches in the centre of the decoration. The palm branch was the symbol of the triumph of faith over the suffering of martyrdom.

The style of embroidery fits within Renaissance developments, with references to grotesque ornament which spread in the early sixteenth century from Italy (Johnstone, p. 79). The term grotesque refers to the location of the designs, the grottos, which inspired the style, rather than to the subjects themselves. The most important of these, discovered in 1493, were parts of the celebrated Domus Aurea, the Golden House of Nero (ruled AD 54–68), in Rome. Designs of masks, draperies, vases and other motifs were found painted on walls and ceilings.

It is likely that such skilled needlework was executed in a professional workshop or in a convent. Embroidery workshops existed in large towns by the Renaissance, governed by guild rules over the training of apprentices, the preparation of embroidery materials and the execution of the needlework. In convents, nuns often exercised their needles in the service of the church by making vestments, as well as teaching girls the requisite skills of a well-brought up woman: embroidery, reading and writing (e.g. Giovanni di Pagolo Morelli in Ricordi (begun in 1393), cited in Mary Rogers & Paola Tinagli. Women in Italy, 1350-1650. Ideals and Realities. Manchester: Manchester University Press, 2005, p. 107.

Reputedly, at one time, this mitre was in the possession of Bishop Palmieri who had been born on August 10, 1493 in Naples, where he subsequently became a cleric. He was elected archbishop of Acerenza and Matera, after his uncle Vincenzo Palmieri resigned in his favour on July 30, 1518. A special dispensation was required as he had not yet reached the canonical age of 27. He became a cardinal in the consistory of November 21, 1527, receiving his cardinal's red hat and the charge of S. Clemente in November 1527. He resigned the government of his see in favour of his brother nine months later. He was administrator of the see of Sarno between May 1529 until August 1530, administrator of the see of Lucera between August 1534 and February 1535, and he participated in the conclave of 1534. In June 1535 he became administrator of the see of Conza, for a year, and subsequently administrator of the see of Policastro from July 1535 until his death in January 1537. Named by Holy Roman Emperor Charles V governor of Milan right before his death, he died on January 20, 1537 in Rome and was buried in the church of S. Maria del Popolo, Rome.

Mitre with lappets of white satin, embroidered in long and short stitches and chain stitches with coloured floss silks and gold thread laid or stitched down to outline the leafy scrolls. The main space of the back and front are ornamented with closely arranged acanthus scrolls balanced on each side of a central device which is flanked by cherubs and surmounted by a coronet. The border to this and the lappets are ornamented with leafy scrolls amongst which are cherubs and birds. Italian. Early 16th century. Bought £25. [1890]

Originally given an early 16th century date, probably 1518-1537 because of attributed owner. Moderately grotesque style of embroidery would support this date. 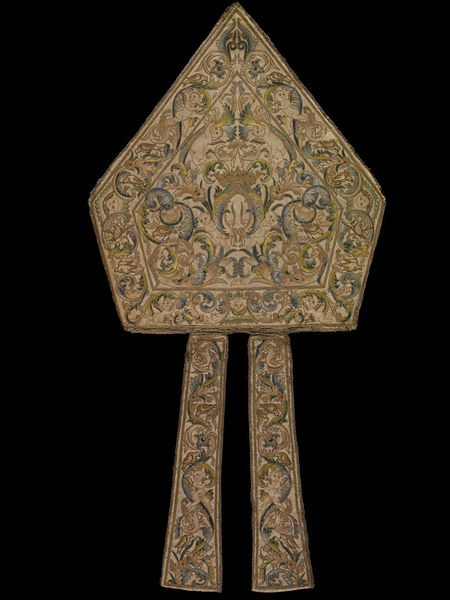