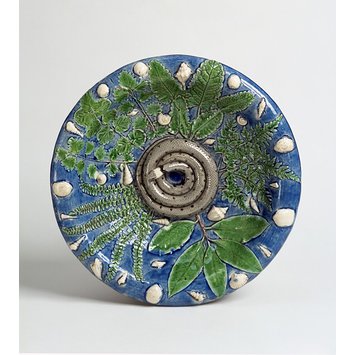 Bernard Palissy (1509/10-1590)was particularly interested in the natural world and conducted numerous geological survey s and scientific experiments. He published serious studies of natural history and lively accounts of the long struggle and desperate financial straits to which he was driven in perfecting his ceramics.

In about 1567 Palissy set up a workshop by the Louvre where he was commissioned by the Queen Mother, Catherine de Medici, to produce a rustic grotto for the Tuileries. Fragements of the unfinished grotto and workshop were excavated in the nineteenth century and again in the 1980s. In 1585 Palissy was imprisoned for his Protestant views and died five years later.

Palissy is best known for his rustique figulines : basins, ewers and dishes decorated with plants and animals skillfully cast from life and vividly coloured with fused enamel glazes. Having perfected his first rustic basin around 1555, Palissy was presented to Henri II, who praised and purchased it. Such elevated patronage confirms the status of Palissy's ceramics as prized possessions which reflect the growing interest of the period in practical knowledge and empirical understanding of the natural world, its 'curiosities' and phenomena.

Palissy's work was extensively imitated by his followers for several decades after his death, and again during the nineteenth century when the style enjoyed a popular revival. Consequently, it is often extremely difficult to distinguish the work of Bernard Palissy from that of others.

Circular dish with decorations cast from life, with raised foot and turn-over edge. In the middle a snake or slow-worm in relief, coloured grey and black. Surrounding it a radiating design of ferns and acquatic plants, coloured green on a blue ground, and interspersed with small shells in white relief. The reverse is mottled green, blue and brown.

Possibly "lot 91" in the Fountaine Collection sale in London in 1884, where it was described as a pale blue, circular plate, ten and three-eighths inches in diameter and decorated with a coiled snake, ferns and leaves.

Historical significance: This dish is an example of the sculptural, 'rustic' ceramics in which Palissy and his atelier specialised, after his workshop had moved to Paris in the late 1560s. This piece is notable for the uncharacteristic simplicity and uniformity of its design and the precise definition of the life casts, which are set against an unusually smooth background. Rather than being dabbed with many colours, the background is of a uniform shade and the compositions are spacious rather than tightly packed.

Objects such as this dish were customarily intended for display. The virtuosity displayed in the design and execution of the ceramics of Bernard Palissy and his atelier rendered them instantly recognisable signifiers of their patrons' wealth and status.

The elaborate design of this dish indicate that it was intended for display rather than frequent use. Palissy excelled at casting leaves, shells and small animals from life and arranging them in a seemingly random way. Many of these moulds and casts were found when his workshop near the Tuileries in Paris was excavated (see the nearby photographs). 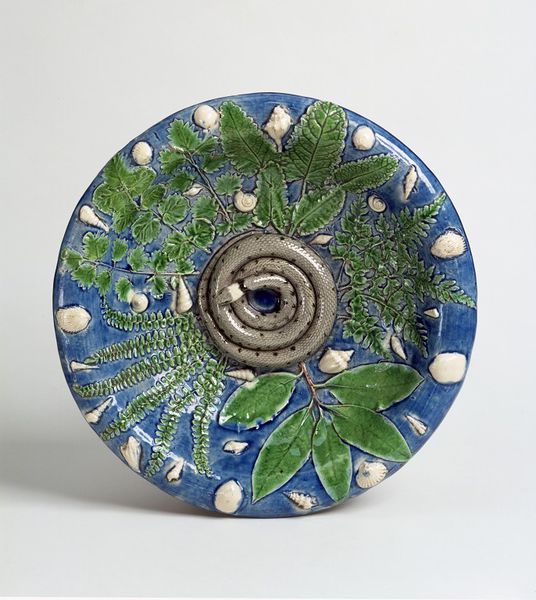