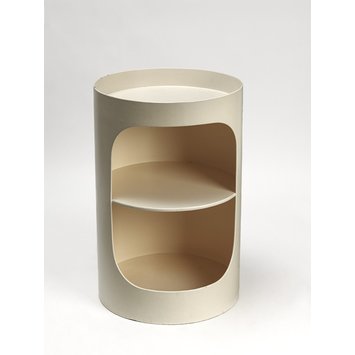 The Tomotom side table is a three tier stand comprising a cardboard tube body with a large aperture on one side, inside which a chipboard shelf is inserted. The table was created by British designer Bernard Holdaway as a later addition to the first Tomotom cardboard collection that was launched to great success at the Ideal Home Exhibition of 1966. All conceived on a circular theme, the range comprised of chairs, tables and lamps coated with tough enamel spray of a plain, eye catching colour with a high gloss finish. The first collection was edited in pillar box red and royal blue but soon extended to black, white, green, yellow and purple. Conceived as cheap throwaway furniture and sold by mail order, the collection struck a chord with the young, fashion conscious families of the late sixties and established itself as an instant Pop classic.

The Tomotom side table is a 73cm high cylinder of thick cardboard, with a large oval aperture on one side that accounts for almost half the circumference of the tube and leaves exposed a round chipboard shelf placed at mid height. At the top of the 45cm wide tube is a recessed chipboard shelf, the rim of which prevents any item placed on it from falling. The hollowness of the tube allows for generous storage space within and use of the bottom as yet another shelf.

The different materials making the three tier stand are seamlessly held together with glue and metal pins. It is sprayed with tough enamel of a plain white colour with a high gloss finish.

The side table was bought in 1969-1970 by Julia Fawcett, an independent design consultant, directly from Hull Traders in their London showroom at 7 Sedley Place. It was used as a bedside table and later as bathroom furniture, until it was stored for 9 years, before being donated to the Museum in 2010.

Launched at the Ideal Home Exhibition in March 1966, the Tomotom collection designed by Bernard Holdaway for Hull Traders became an instant Pop Art classic. The cardboard used for the first pieces was sourced from Bowater Paper Company, an industrial supplier who produced cardboard tube for heavy duty application. The first Tomotom tubes were intended as formers for poured concrete in motorway construction. The instantaneous success of the collection and great number of orders led Peter Neubert, director of Hull Traders, to acquire a new mill to specifically manufacture the tubes for the company. Chipboard was chosen for its strength and low cost. Glue and metal pins were used to hold the different parts together.

The designer regularly expanded the Tomotom range, first in October 1966 with nursery furniture and toys. This side table was launched in 1967, widely advertised through the Press as a multi-purpose stand. It was followed in 1968 by a series of circular wall units. The last addition to the collection was brought in 1969, under the form of customised hand cut chairs with undulating outlines. Conceived as throwaway furniture, the objects were sold by mail order, a revolutionary distribution system at the time. The Tomotom collection immediately met with public enthusiasm, as the choice of cheap materials made it accessible to young families, with original prices of £10 18s for a table and £3 18s for a dining chair. Holdaway famously predicted that "the whole concept of people buying things to last a lifetime [had] ended". Interestingly, the company supplied their customers with a touch up kit to do their own repairs. The collection was also an international success with clients in France, Germany, Italy and even the United States. Tomotom chairs even featured in the 1968 Parisian exhibition Contemporary Seating 1925-1968 at the Arts Décoratifs.

In her seminal book Shirley Craven and Hull Traders, Lesley Jackson has argued that Tomotom had perfectly captured the Zeitgeist of the Swinging Sixties. Created as throwaway furniture, most of it has disappeared today.

The name Tomotom is the result of the patenting process. The original name chosen by Holdaway, Inner Circles was already taken; same with Neubert’s idea of Tomtom, recalling the drum shape of the furniture. They therefore decided to call their creation Tomotom.

Bernard Holdaway (1934-2009) trained in interior design at the Royal College of Art in the late 1950s, where he met his wife, textile designer Shirley Craven in 1957. The couple joined the textile company Hull Traders, with Craven appointed art director in 1959 and Holdaway designing the company’s early graphics and later the Tomotom cardboard series, its most successful range of furniture,

Created in 1957 by Tristram Hull and Stanley Coren in the London neighbourhood of Willesden, the company was taken over by Peter Neubert in 1959 and established itself as a visionary enterprise, where artistic innovation flourished. In 1961, it moved to Trawden, Lancashire. The company was mainly famous for its pioneering work in the textile industry, promoting bold designs and high quality techniques such as the use of pigment dyes and hand screen printing.

In 1967 Holdaway produced another furniture collection, Trawden, with strong modernist vernacular. That same year, Hull traders became the UK licensees for the Bonga range by French designer Jean-Louis Avril. In 1971, Peter Neubert launched his design for the Roll collection, large sausage-shaped cushions which you could place in multiple variations. However, none of these met with the same dazzling success as Tomotom. Eventually, the economic recession and radical changes in fashion that were about to come put a stop on Holdaway’s perspectives for Tomotom and production stopped in 1971. 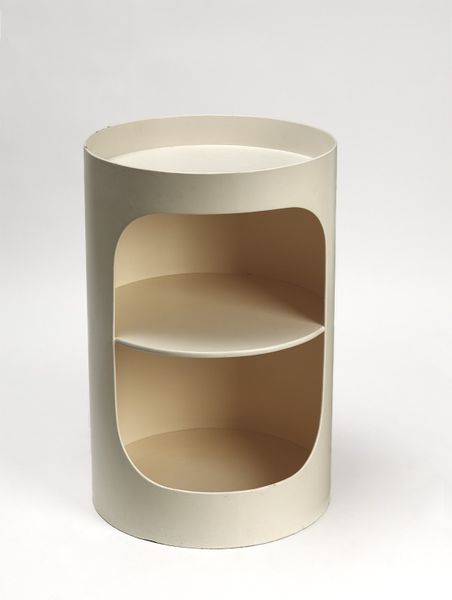