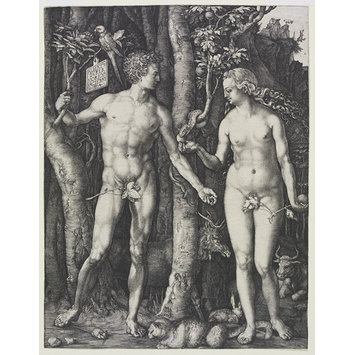 This engraving took Dürer some four years to complete. The five states (different workings of the printing plate) of this engraving together with the large number of preparatory drawings, several of which survive, document the particular care with which Dürer planned the design. These studies range from proportional constructions of the figures to detailed studies of parts of the figures and the landscape. Dürer's pride in the final print is displayed in the longest, most prominent inscription he ever made on an engraving: 'Albrecht Dürer of Nuremberg made this 1504' (Albert[us] Dvrer Noricvs faciebat 1504)

An engraving depicting the moment before the Fall. Adam and Eve stand side by side with their faces turned towards each other in profile. Eve holds the apple behind her back and the crowned serpent, coiled around a tree, takes another fruit from her hand. Adam is holding a branch of mountain ash, symbolising the Tree of Life. A parrot is perched in the branch and a tablet bearing Dürer's inscription hangs from it. A forest forms the background with a craggy peak and mountain goat visible in the top right hand corner. There is a mouse and a cat (a symbol of choleric temperament) by Adam and Eve's feet. A rabbit (a symbol of sanguine temperament), an elk (a symbol of melancholic temperament) and a bull (a symbol of phlegmatic temperament) are positioned in the forest. The iconography relating to the theory of the temperaments/humours is a reference to the philosphy that Man contained a perfect balance of the four humours before the Fall. After the Fall the nature of each human was thought to be corrupted by the dominance of one or another of the humours.

Dürer produced this engraving at a point in his career characterised by the expansion of his workshop and an increasing sophistication in the technique and subject matter of his prints. Two trial proofs exist for this engraving which show how the image was worked and built up section by section with most of the wooded background completed first and the two figures left until last.

This impression was acquired by the Museum in 1910 as part of the Salting Bequest.

Historical significance: Five states of this engraving exist as well as preparatory drawings suggesting that Dürer took particular care over its design. The inscription 'Albrech Dürer of Nuremberg made this (AD monogram) 1504' was the longest and most emphatic that Dürer ever added to one of his prints, which could be interpreted as a sign of pride in the work. Dürer was the first artist to make full use of his monogram as a form of trademark, emphasising the authorship of his prints and ensuring that his graphic work spread his reputation throughout Europe. It has been suggested that the thorough integration of the inscription into the design of this print may have been intended to deter copyists who could legally copy the image, but not the inscription and monogram.

Adam and Eve shows the application of Dürer studies into human proportion which began to appear in his drawings around 1500. Eventually Dürer published the 'Instructions on Measurement' (1525) and 'Four Books on Human Proportion' (1528). The nude figures of Adam and Eve, shown in a classical contrapposto stance, demonstrate Dürer's active interest in absorbing Italian Renaissance principals into his work and presenting them to a Northern audience.

The Print is also notable for the differentiation of textures that Dürer achieves including bark, animal fur, human hair and snake skin. The lighter use of lines and stippling on the figure of Eve gives her skin a softer, whiter and more luminous appearance than Adam’s

There is a Bulls head watermark. Possibly Meder 3/a as there is a scratch on Adam's thigh, but no scratch is visible on his hip. There is a scratch towards Eve's left knee. Scratches in the sky are difficult to interpret. Comparable impressions in the British Museum have not been asigned Meder letters. 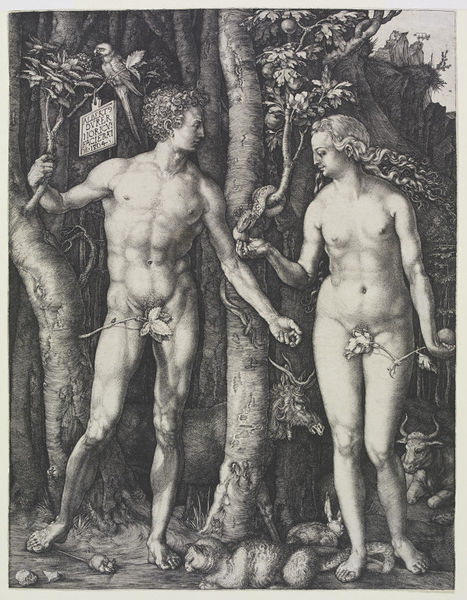