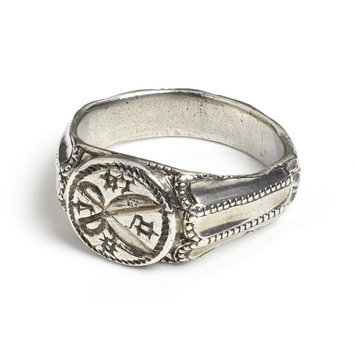 The open shears engraved upon the bezel of this signet ring indicate that it belonged to a member of a tailor's guild. The tools of craftsmen were often engraved upon seal matrices and signet rings to indicate membership of the guild and thus to confer status upon the wearer.
A large group of similar rings from Germany and central Europe have been found, most of which are silver or bronze, and which bear the emblems of a number of different trades.

Signet ring, silver, the oval bezel engraved with an open pair of shears, with an inscription, possibly 'g/r/a/c/e', in black lettering around the shears. The shoulders are decorated with three bands of fluting with pearled edges. The back of the hoop is spirally gadrooned into five bands with pearled edges.

possibly 'g/r/a/c/e'
The shears are probably an individual's mark.

Historical significance: The open shears engraved upon the bezel of this ring indicate that it may have belonged to a member of a tailor's guild. The tools of craftsmen were often engraved upon seal matrices and rings to indicate membership of the guild and also confer status upon the wearer.
A large group of rings from Germany and central Europe, most of which are silver or bronze and which bear the emblems of a number of trades can be found in the Koch collection (Chadour, cat nos. 1098-1138). The British Museum holds a fifteenth century bronze French ring bearing a mason's hammer and the inscription Guille Macon (William the mason) (Dalton, cat.419., Ward, cat.168). The closest parallel to the V&A ring is catalogue number 1101 in the Koch collection, a Hungarian silver ring engraved with a pair of open shears on the bezel enclosed within a shield above which are the letters NM. Although the V&A ring was originally believed to be English, the parallels in the Koch collection and British Museum make a European or German origin more likely. The English attribution was partly based upon the inscription being read as grace but this cannot be clearly made out and should be reassessed.

A similar device of an enamelled pair of open shears with a small star is found on a shield shaped badge fixed to the pin of a circular ring brooch (Westfallisches Landesmuseum, Mûnster), illustrated in Lightbown 'Mediaeval European Jewellery', pl. 87. 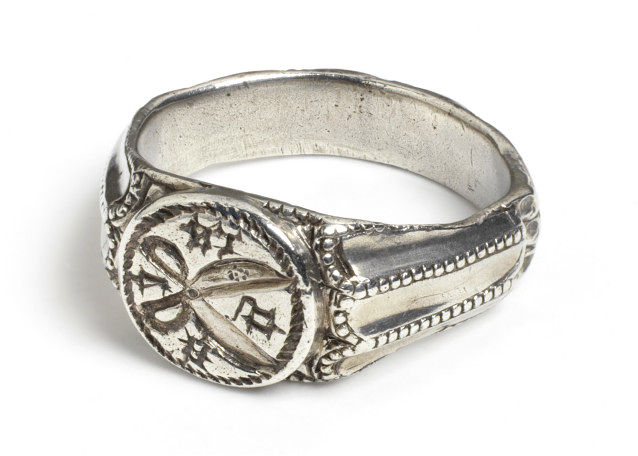