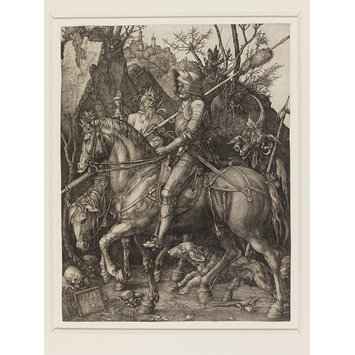 Knight, Death and the Devil

This is one of Dürer’s ‘Master Prints’, the others being ‘Melancholia I’ and ‘St. Jerome in his Study’. Made between 1513 and 1514 these three prints mark the pinnacle of his technical accomplishment as an engraver.

From 1507 Dürer experimented with lighting effects in his prints, introducing middle grey tones between the white paper and darkest shadows. Seen close-up the grey middle tones are actually a complex of dots, curved lines, cross hatchings and other irregular hatchings, which produce an astonishing range of textures.

Between them it has been suggested that the three Master Prints represent two states of man's life, active and contemplative, with Melancholia said to represent Dürer himself. However there is no evidence that they were ever treated or sold together as a set. In his diary of 1520 Dürer calls this print ‘Reuter’ (Knight). The meaning of this work has been subject to various interpretations including the theory that the rider represents the Christian knight from Erasmus’ Handbook of 1504. In this engraving Death and the Devil meet a knight on a narrow and rocky path. Death holds an hour-glass to signify how much time the knight has left. The lizard represents impending danger and there is also a skull lying on the rock nearby.

A knight in profile riding forwards on a splendid horse. He is in armour and stares resolutely straight ahead. There is a wad of fur on the end of his pike (possibly a fox's brush) and oak leaves are tied to the horses head and tail - symbols of the return from a successful hunt. Behind the knight is a crowned figure of death depicted as a decaying corpse with snakes encircling the head and neck. Death holds up an hour-glass to the knight and is riding a meagre horse which bows its head towards a skull on the ground. The sand in the hour-glass is half run through, suggesting that the Knight still has time left to live. To the right is the Devil, shown with a swine's snout and large horn carrying a pickaxe. A dog runs alongside the horse and there is a lizard crawling in the opposite direction. Behind the figures is a landscape of rocks, tree roots and sparse vegetation and a walled town is visible in the background.

This print was one of 11 engravings that Dürer produced in the years 1513 and 1514, a period during which he concentrated on engraving to the exclusion of painting and woodcut printing. It is acknowledged as one of the three master engrvings that represent the pinnacle of his achievement in the medium.

In a diary of his journey to the Netherlands Dürer referred to the engraving simply as the ‘Reuter’ (Horseman). There have been various interpretations of the figure of the Knight. Among the heroes he has been thought to represent are Martin Luther (1483-1546), Girolamo Savonarola (1452-98), Pope Julius II (died 1513) and Franz von Sickingen (1481-1523), a feared warrior king who attacked the city of Worms in 1513 (Bartrum, Guilia. ‘Albrecht Dürer and his Legacy’. The British Museum Press, 2002. p 187). Erwin Panofsky has interpreted the print as Dürer’s response to Erasmus’s ‘Handbook of the Christian Knight’ (Panofsky, Erwin. ‘The Life and Art of Albrecht Dürer’. Princeton: Princeton University press, 1955. Pp 151-2). It is possible that the powerful pose of the horse may have been inspired by Andrea del Verrocchio's massive bronze monument to Bartolommeo Colleoni which Dürer knew from his visits to Venice (Bartrum p 187). Some of the preparatory drawings that Dürer worked from have been identified, see Walter L Strauss 'The Complete Drawings by Albrecht Dürer', New York 1974 (1494/8, 1495/48, 1513/2, 1513/3).

This impression was acquired by the Museum in 1940 as part of a large bequest of engravings and woodcuts by Dürer.

‘Knight, Death and the Devil’, 1513, ‘St Jerome in his Study', 1514 and ‘Melancholia I', 1514 are generally referred to as Dürer’s master engravings. The three prints are comparable in size, complex iconography and the high quality of their execution, but do not have any direct compositional relationship and there is no evidence that Dürer treated them as a set when he sold or donated them (Bartrum, Guilia. ‘Albrecht Dürer and his Legacy’. The British Museum Press, 2002. p 185). Their thematic connections, however, have suggested various interpretations. Fiedrich Lippmann saw a correspondence with the scholastic classification of the virtues as moral, theological and intellectual with ‘Knight, Death and the Devil’ representing the active, practical Christian life, 'St Jerome in his Study' the spiritual life of contemplation and 'Melancholia I', the life of secular genius (Panofsky, Erwin. 'The Life and Art of Albrecht Dürer’. Princeton: Princeton University press, 1955. p151). While 'Knight, Death and the Devil' and 'St Jerome in his Study' have been seen as a comparison between the active and contemplative Christian lives, 'St Jerome in his Study' and 'Melancholia I' have also been paired as a contrast between life in the service of God and life in competition with God (Panofsky p 156).

The title 'Knight Death and the Devil' dates to H.S. Hügen's listing of Dürer's prints in 1778.

Meder a, b or c. There appears to be no watermark and the slight scratch marks appearing in the sky can also be seen in the British Museum's Meder a impression.

Bartsch a or b, before the vertical scratched in the sky to the right. 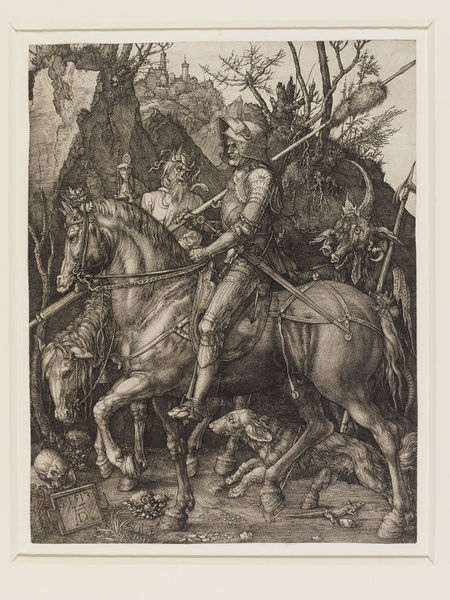