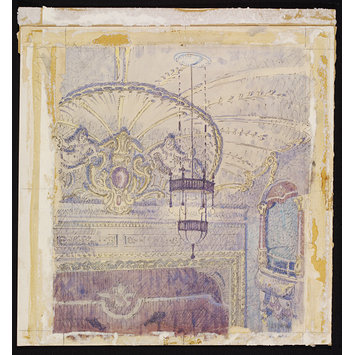 The Interior of the Old Grand Theatre, now the Gaumont Hippodrome, Colchester

Walter Bayes was a founding, but minor, member of the Camden Town Group, and this watercolour in particular demonstrates his debt to the group's leader, Walter Sickert. Music hall and theatre interiors were a favourite subject of Sickert, but whereas he preferred to concentrate on the eerie effects of flaring gas jets on the faces of performers and audience members, Bayes's pale watercolour tones emphasise the blazing lights and sparkling surfaces of the pink, white, and gilt decor of this Edwardian theatre. The elaborate shell and pearl motif above the stage pays tribute to local pride -- Colchester has long been known for its oysters.

The Old Grand Theatre opened in Colchester in 1905, as the Grand Palace of Varieties. By the time Bayes painted this scene, the theatre was nearing the end of its existence as a venue for live performance. Many Victorian and Edwardian theatres were lost to dereliction and postwar development, but the Old Grand Theatre was relatively lucky: it became in turn a cinema and a bingo hall, before being restored inside and out in the 1980s and given a new lease on life as a nightclub.

A watercolour drawing of the view from one of the boxes, or the gallery, of the Old Grand Theatre in Colchester, showing one box but focusing on the oyster shell and pearl pendant decoration above the proscenium arch of the stage; signed.

'-WB-'
Signed in pencil by the artist, lower right corner

Walter Bayes was a minor member of the Camden Town Group, and this watercolour demonstrates his debt to the group's chief exponent, Walter Sickert. However, whereas Sickert's theatre scenes usually concentrate on the faces of the audience in boxes lit by flaring gas jets, Bayes's paler watercolour emphasises the sparkling surfaces of the theatre's elaborate Victorian decor, particularly the oyster and pearl motif above the stage. This was a reference to local pride, Colchester having long been famous for its oysters.

Historical significance: The Old Grand Theatre (now the Gaumont Hippodrome) was one of relatively few Edwardian theatres to escape post-war demolition, being converted into a cinema and then a bingo hall. Within the last twenty years the splendid interior has been restored and the theatre converted into a nightclub.

Victorian and Edwardian theatres were lost to dereliction and new development in great numbers following the war. At the time Bayes painted this view, the Colchester Theatre (which opened in 1905) was nearing the end of its life as a theatre.

Watercolour of the interior of the Old Grand Theatre, now the Gaumont Hippodrome, Colchester, by Walter Bayes; from the 'Recording Britain' Collection; England, ca.1940. 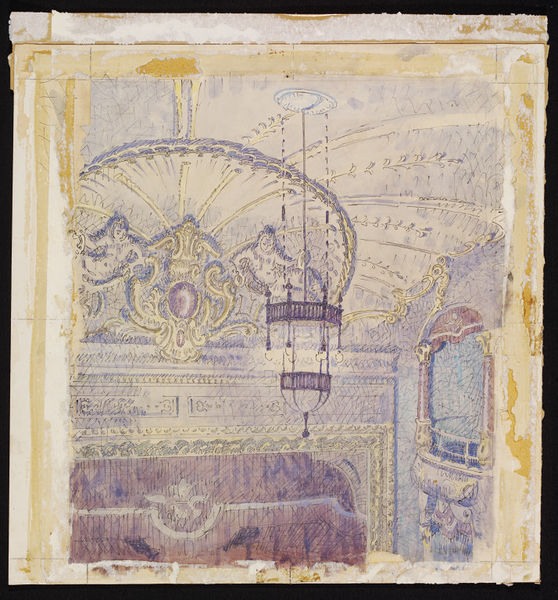