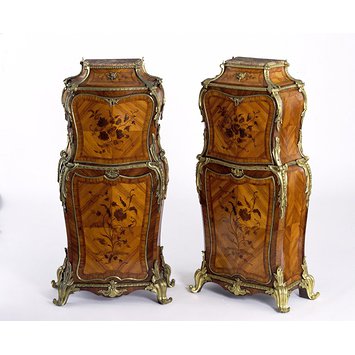 This secrétaire and its pair look as if they might have been made in Paris in the period 1755–1765. The lyre-shaped body was fashionable in France at the time for such small, delicate writing desks. The decoration of flowers in veneers cut across the grain of small branches (‘end-grain’ or ‘bois de bout’ marquetry) was also used at the time by high-quality cabinetmakers.

However, some of the details of construction, particularly of the drawers, suggest that the secrétaire was made in London in the early 19th century. This piece is branded with the initials ‘EHB’ for the 19th-century dealer and cabinetmaker Edward Holmes Baldock. He ran a profitable business in London, selling antique furniture, glass and china and repairing and copying pieces of furniture made in Paris in the 18th century. This secrétaire was probably made between 1830 and 1845.

Pedestal secrétaire (one of a pair) of oak and chestnut or ash, veneered with tulipwood inlaid with cross-banded bloodwood (bois satiné) and with floral marquetry in end grain (bois-de-bout)kingwood; interior veneers of tulipwood, perhaps red-stained, inlaid with purplewood, and padouk. Brass mounts, oncolite limestone top. The top drawer has a shaped front and a brass knob in the form of a floral spray. Below the drawer is a fall-front with a writing surface of green leather, tooled and gilded, and two inner drawers with an open compartment above. The drawer-fronts are inlaid with a geometric pattern. Below the fall-front is a shaped door which opens to reveal a cupboard with a single shelf.

The fall-front and cupboard door have marquetry of flowers and tendrils, the wood used for the flowers and leaves cut across the grain to show the growth rings. The flowers are set against four panels of veneer, in which the grain of the wood is arranged to form a diamond shape. The fall-front and cupboard door have edging strips of brass, and the corner mounts are in the form of acanthus leaves and husks.

Oak and chestnut, veneered with tulipwood, marquetry of kingwood and tulipwood; brass mounts and marble top

EHB
Branded on the back of the top drawer section. The mark of Edward Holmes Baldock

N4
Painted on the underside of the marble

I, II, III, or IIII; LB, LF, RB, or RF
Scratched onto the mounts that have been removed for examination.

This secrétaire, one of a pair, was in the collection of John Jones prior to 1882. It is a copy of the model made in Paris by Jean-François Dubut about 1760, and formerly in the Hillingdon Collection. Other copies include a pair in the Frick Collection, New York, possibly made by Paul Sormani, and the Bowes Museum, Barnard Castle, made by Monbro Fils Ainé. Other versions of this model were produced by firms such as Lexcellent, Dasson and Durand.

Examples of this model on the art market include a secrétaire twice stamped DUVEEN, was offered as one of a pair at Christie’s, New York, 24 April 2003, lot 282; and a secrétaire stamped EHB (the initlals of Edward Holmes Baldock), and later stamped three times: DUVEEN LONDON, offered at Christie's, London, 30 September 2015, lot 191. The brothers Joseph and Henry Duveen founded Duveen Brothers in 1867, and were leading art dealers active in London, Paris and New York.

Secrétaire of oak and chestnut or ash, veneered in tulipwood and kingwood, one of a pair; stamped EHB for Edward Holmes Baldock.

Pedestal secretaire
1830–45
The demand for 18th-century French objects among collectors like Jones led to the creation of many copies. This secretaire looks as if it was made in Paris in about 1760, but details in the construction reveal that it was not. It is stamped ‘EHB’ for Edward Holmes Baldock, a prosperous London antiques dealer and cabinet-maker known for selling, repairing and copying antiques.
England (probably London)
By Edward Holmes Baldock
Oak and chestnut or ash, veneered with tulipwood; marquetry in European and tropical hardwoods; copper alloy mounts; limestone top
Bequeathed by John Jones
Museum no. 1012A-1882 [] 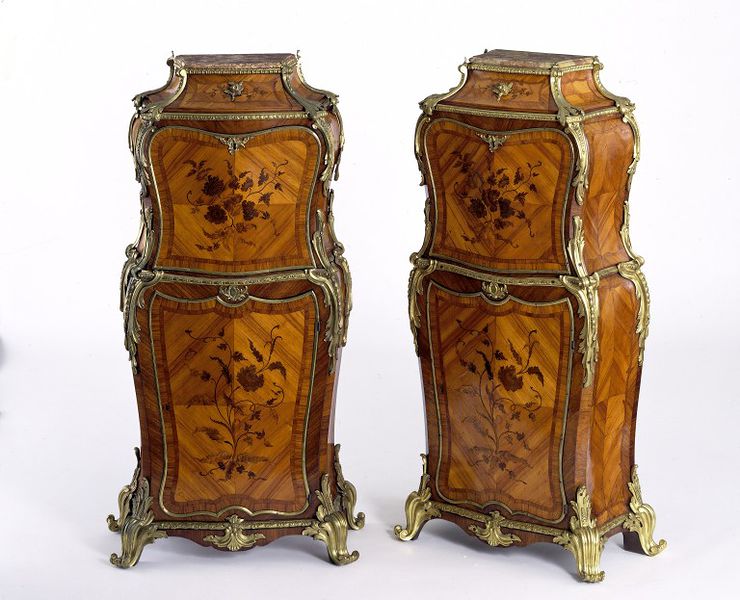