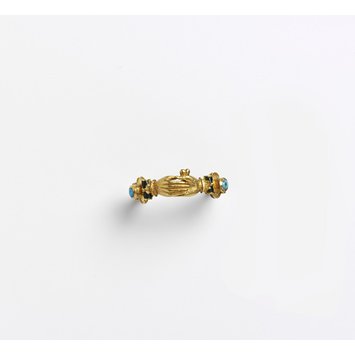 A gimmel ring (from the Latin 'gemellus', or twin) comprises two or sometimes three interlaced hoops with separate bezels that can be joined snugly together. They were often decorated with clasped hands and hearts, and engraved with romantic mottoes, the phrases from marriage services or with the names of a couple. This suggests they were often used as wedding rings, although they could also be given as more general symbols of friendship and alliance. The form has its origins in single-hooped Roman rings designed to look as though they had more than one hoop thanks to the arrangement of bezels around them. Rings with interlaced hoops are mentioned in early-thirteenth-century Europe, and were particularly popular in the fifteenth- and sixteenth-century. Rings with a bezel of clasped hands, such as this one, are often known as 'fede' rings (Italian, 'faith, trust'). The term was popular among nineteenth-century collectors, though it is found as early as the seventeenth century. Among the definitions of 'fede' in John Florio's 1611 Dictionarie of the Italian and English Tongues is 'a ring made with hand in hand'.

The inscriptions inside the hoop of the ring probably refer to a wedding between Cornelisie, the daughter of Engels and Symon, the son of Cornelis. The joined hands and interlocking hoops form a visual symbol of the union which marriage has created.

the left hoop inscribed 'SYMON CORNELIS Z.', the right one inscribed 'CORNELISIE ENGELS. D.'
The letters D and Z probably refer to ‘daughter’ (dochter in Dutch) and ‘son’ (zoon in Dutch). It was very common in the Netherlands for a surname to consist of the name of the father or mother. Thus the name might be abbreviated as Cornleliszn.

For this ring SYMON is the son of CORNELIS and CORNELISIE is the daughter of ENGELS.

Enamelled gold gimmel ring, set with turquoises, decorated with one hand with a heart and strapwork on the shoulders, the left hoop inscribed 'SYMON CORNELIS Z.', the right one inscribed 'CORNELISIE ENGELS. D.', Holland, late 16th or early 17th century. 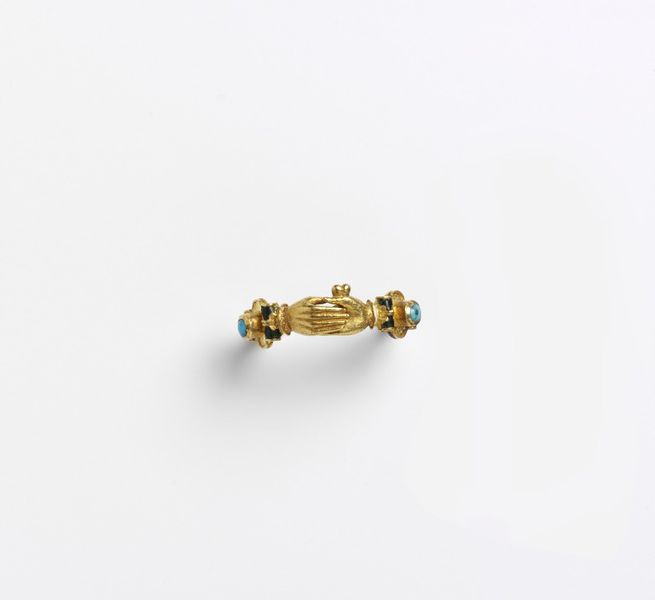