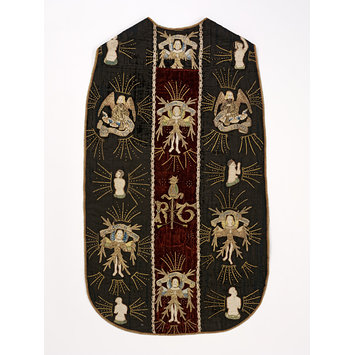 A chasuble is the principal church vestment worn by a priest at the celebration of the Christian mass. It was usually made of rich materials (silks) and adorned with orphrey bands, embroidered with images of particular symbolic significance in Christianity. Different colours were used for different seasons in the Christian calendar, black being appropriate for funerals or requiem masses. This chasuble was recycled from a pall, a cloth used to cover a coffin. The embroidery dates to the early 16th century, while the style of the vestment dates to after 1600. The initials RJ on the back are those of the person for whose coffin the cloth was originally made (Robert Thornton, Abbot of Jervaulx).

The velvet was probably made in Italy or Spain, then the major velvet-weaving centres in Europe, and provided an ideal foil for rich embroidery which might be executed at home or abroad.

Chasuble of black silk velvet, with orphreys of crimson silk velvet; embroidered in coloured silks, silver-gilt and silver thread and spangles, partly worked on cream-coloured satin, green silk and linen, and afterwards applied. Probably cut from a pall, and used for Requiem Masses.

Similar figures occur on the orphreys: in the middle on the back are the initials RT looped by tasselled cords to a crosier passed through a mitre; beneath are traces of the representation of a tun or cask, evidently part of a rebus (an enigmatical representation of a name, words or phrase by figures, pictures, arrangement of letters, etc., which suggest the syllables of which is is made up).

'SVRGITE MORTVI / VENITE AD IVDICIVM / IVSTORVM ANIME / IN MANV DEI SVNT'
Arise ye dead
Come to judgement,
The souls of the just
Are in the hands of God
Figures of angels blowing trumpets and winged seraphs holding scrolls, inscribed with these words from the Book of Wisdom, III, I.

Robert Thornton, to whom the initials RT refer, was 22nd Abbot of Jervaulx Abbey, Wensleydale, Yorkshire, from 1510 to 1533. His tombstone is in nearby Middleham Church.

Historical significance: Black textiles of this period seldom survive intact because of the corrosive effect of the dyestuffs on the fabric. This is interesting as an example of a garment made specifically for a particular clergyman, and for the fact that after the Reformation it was probably cut down into its existing shape and continued in use.

Vestment.
This chasuble is the vestment worn by a Catholic priest when celebrating the Mass. It was - and is - worn over the alb and stole. This style of chasuble became widespread after 1600. Prior to that - at the time from which this embroidery dates - chasubles were circular garments which slipped on over the head.

Prior to the 1960s, the priest stood facing the altar with his back to the congregation, so the back of the chasuble was visible most of the time. This fact usually accounts for the dominant imagery being on the back and the construction being more perfect there. This chasuble is probably made from Italian (or Spanish) velvet, cut down from its original bell shape into the fiddle-shape that became popular in the early seventeenth century. The colour suggests this chasuble would have been worn for requiem masses or for Easter.

The velvet was probably made in Italy or Spain, then the major velvet weaving centres in Europe, and provided an ideal foil for rich embroidery which might be executed at home or abroad.

Chasuble of black silk velvet, with orphreys of crimson silk velvet, embroidered in coloured silks, silver-gilt and silver thread and spangles; garment and embroidery made in England, silk possibly made in Italy or Spain.

Made for Robert Thornton, 22nd Abbot of Jerveaulx (1510-33), as indicated by the letters on the orphrey on the back, and the testimony given at the time of acquisition, that the vestment came from Hexham. Probably originally for the pall covering his coffin.The silk velvet was probably made in either Italy or Spain, the main centres of silk production in Europe at this time.

Attribution note: Made for Robert Thornton, Abbot of Jervaulx 1510-1533
Reason For Production: Commission 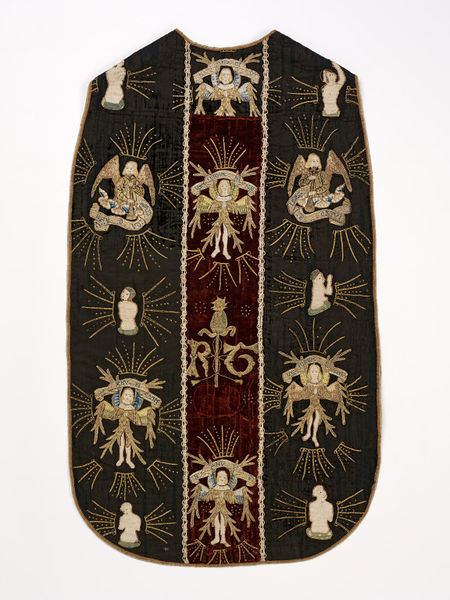