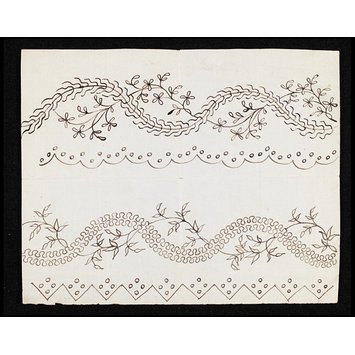 These are two designs, one above the other, for embroidery on muslin or gauze. They are for the border of a petticoat to a woman's open gown or for the border of the gown itself. Women wore gowns that were open in front to reveal the petticoat. This design is for the embroidery along the border above the bottom hem of a petticoat and also for such a border on the gown itself. The design repeated so that this pattern continued around the border. The scalloped edge in the upper design and the serrated edge of the lower design formed the hem of the gown.

The motif of bows with tassels appears to be generic and occurs on a length of mull (a light muslin) embroidered in coloured silks in a private collection and in a 'Pattern for a Train, Drawn by Mr Styart in Plate IV of The Fashionable Magazine published n London in 1786.

Design of two wavy meanders, like the backbones of snakes in pencil, pen and brown ink. The design is on a small, rectangular sheet of laid paper. There are no holes for pouncing. The paper was once folded into four but is now flattened out. There are two pinholes to one side of the design with the triangular border but there are no other pinholes.

'I have not worked these / but I thought mayhaps /
you might like them - /
Return all when you /
Have done with them .'
In pen and brown ink in handwriting

'LI AINE'
This is a watermark. Most of the tops of the letters are missing because the paper is torn along this edge.

The designs were bequeathed to the Victoria and Albert Museum in 1973 by Raymond Johnes who had 'enormous and miscellaneous collections'.* Johnes' collection included Japanese art, on which he published,** Indian and European material. He did not specialise in collecting textiles although he owned some examples. He was in contact with the Museum 1920s-1970 offering to sell objects from his collection. Johnes did not provide the Museum with information about the history of ownership of the designs.

The design comes from a group of designs that were part of a retailer's archive which employed professional embroiderers. The names of the female clients inscribed on the designs were of the aristocracy, gentry or from wealthy families that moved in the upper reaches of society. They had homes in the country and came to London for the season. Retailers who sold such designs were linen drapers and lacemakers, both of which categories existed in London and were available to the clients. Many pattern drawers worked in London where their trade proved a lucrative business during the season. The similarity of some of the designs from this group to those by Styart, whose designs were published in London, does support the argument that these designs came from a retailer's archive based in London.

Attribution note: The folds in the paper suggest that the designs might have been folded for transport. Perhaps they were sent to another embroiderer.

The design is in fact two designs because there is a different pattern like a backbone on each with its own border which is unlike the other. The use of the plural form of the pronoun in the inscription 'I have not worked these' supports this theory. Two designs on one sheet shows an economic use of paper in making designs for embroidery. The lack of pinholes means that the designs were not used much. There is an embroidered muslin dress with a petticoat in the Museum of London with a similar wavy pattern like a backbone and a serrated edge like the design on the bottom MOL 51.20/1.
Reason For Production: Retail 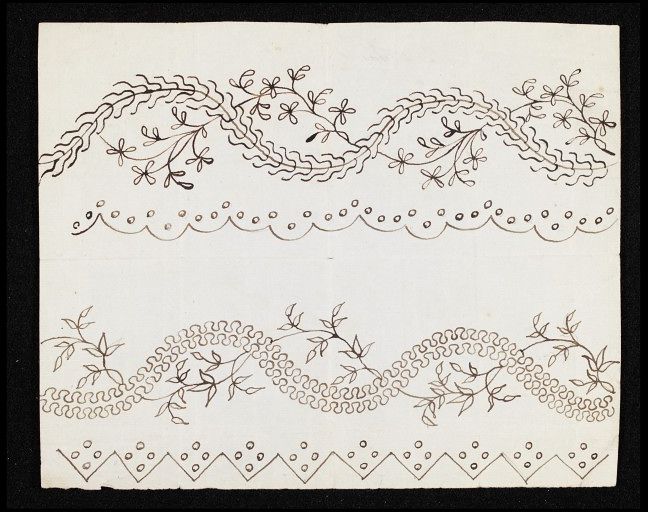