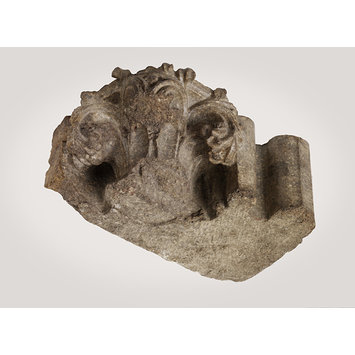 This capital is one of five found on the site of the former Benedictine abbey of Chertsey during excavations in 1861, all of which are now in the Victoria and Albert Museum (A. 57 to A. 61-1916). They were found to the south of the south chancel aisle of the abbey church, in a rectangular room which has since been identified as probably a Lady Chapel. Although the date of this room cannot be established from documentary records, the style of the capitals points clearly towards a date in the third quarter of the thirteenth century. It is worth noting that the use of Purbeck marble for capitals is comparatively rare. The capitals from Chertsey would originally have topped columns in a blind dado arcade in a manner similar to the arrangement in the aisles of the Angel Choir at Lincoln Cathedral (1256-1280).

This is an attached corner capital from Chertsey Abbey, from where it was excavated in 1861. The capital, one of five found on the site of the old Benedictine Abbey (inv nos. A.57 to A.61-1957), is decorated with three stems of rather stiff, curling foliage, in an angle, of which one side is mouled. All five capitals were found to the south of the south chancel aisle of the abbey church, in a rectangular room which is thought to have been a Lady Chapel.

The style of the capitals is clearly that of ca. 1250-70. The finely-carved and tightly curled bunches of foliage are similar to those of the Chapter House of Westminster Abbey, completed before 1253, and on the tomb of Archbishop Walter de Gray (d. 1255) at York Minster. Also analogous are Purbeck capitals from the Chapter House of Salibury Cathedrals (now in the Salisbury and South Wiltshire Museum), although these date form a little after 1280, but these follow the example set by Westminster. The Chertsey capitals would originally have topped columns in a blind dado arcade in a manner similar to the arrangement in the aisles of the Angel Choir at Lincoln Cathedral (1256-80).

The use of Purbeck marble, a hard limestone from Dorset, for capitals was comparatively rare - the stone was also used for capitals in the chapel and other parts of Lambeth Palace - but it was an ideal material since the hardness of the stone allows the sculptor to produce very detailed work. The use of stiff foliage to decorate capitals was the most popular form of decoration for capitals in thirteenth-century England, and was hardly to be seen outside of England. First seen at the close of the 1100s, it had spread to the lesser parish churches by the middle of the subsequent century.

The Benedictine Abbey of St Peter, at Chertsey in Surrey, was founded in in 666 AD by Frithwold, Viceroy of Surrey, which was then ruled by Wulphere, King of Mercia, by royal charter. A certain Eorcenwald became its first abbot. Having been sacked by the Vikings, and several times rebuilt and refurbished, the the Abbey was dissolved in 1537. The then Abbot, John Corderoy, and fourteen monks temporarily moved to Bisham Priory in Berkshire but this in turn was dissolved a year later. 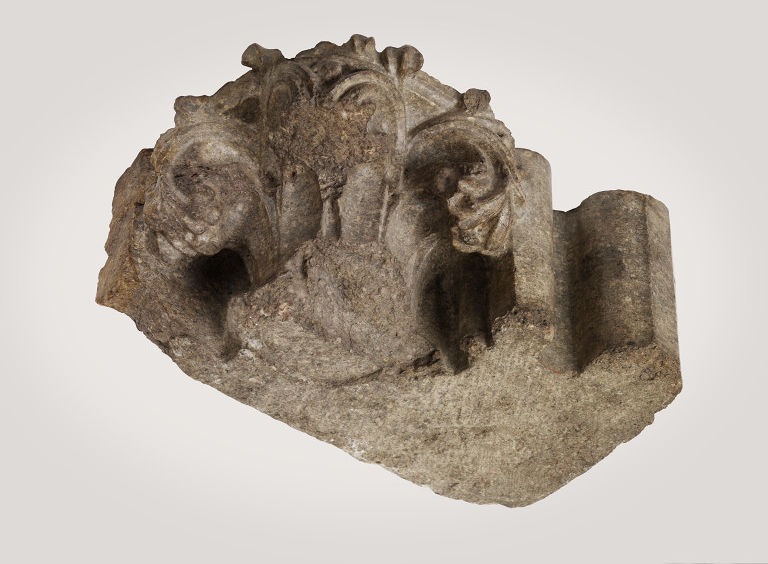