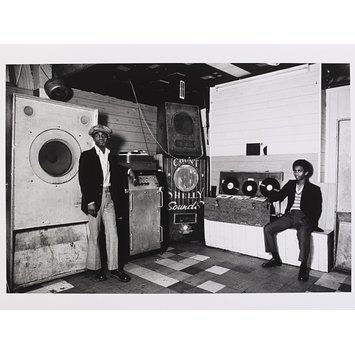 Dennis Morris moved to Britain from Jamaica in the early 1960s and began taking photographs from the age of eight. His personal photographs of British Caribbean community life in Hackney came to form the series Growing Up Black.

The series includes photographs that document London's sound system music scene in the 1970s. The sound system subculture first developed in Jamaica, as DJs rivalled to build the best speaker system offering the latest music for their performances. British Caribbean migrants brought the sound system concept to London in the 1960s, beginning at house parties known as 'Blues Dance' and later moving into clubs. The Four Aces club in Hackney was a well known sound system venue where leading DJs held sound clashes playing the latest ska and reggae record imports. Ephraim Barrett, known as 'Count Shelly,' was the resident sound system operator at the Four Aces in this period. Dennis Morris has since described the Four Aces as being 'for the big boys, big men. To go there you had to be tough.'

The V&A acquired ten photographs by Dennis Morris as part of the Staying Power project. Photographs by Charlie Phillips documenting people and places associated with London's early sound system music scene were also acquired as part of the project. Staying Power is a five year partnership between the V&A and Black Cultural Archives. The project aims to explore black British experience from the 1950s to the 1990s through photographs acquired by the V&A and oral histories conducted by Black Cultural Archives.

Black and white photograph of two black men in the corner of a room edged with amplifiers and speakers. One speaker seen in the centre of the image is labelled 'COUNT SHELLY Sounds'. On the right hand side of the image, one of the men is sat on a bench looking directly at the camera, his right arm resting on a large box of records. The other man stands next to a very large speaker wearing flared trousers and a cloth cap.

signed and titled on the reverse

Born in Jamaica, Morris became interested in photography
through a club at his church in London. His personal
photographs of British Caribbean community life in
Hackney during the 1960s and ’70s came to form this
series. Music is a key feature of Morris’s work, particularly
the sound system subculture that was brought to London
by British Caribbean migrants. 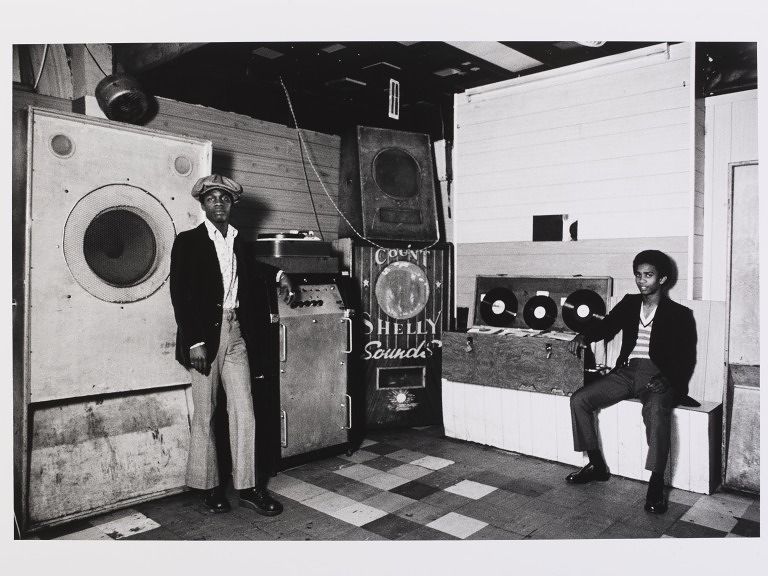