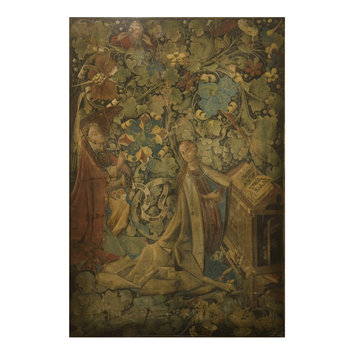 The Annunciation with the Tree of Life

The Annunciation is a story from the Bible. It tells of the angel Gabriel visiting the Virgin Mary to inform her that she will conceive, and give birth to, the Son of God.

This painting, by an unknown artist, has been inscribed on the pulpit with the date 1472. The composition of the Annunciation group, with the Virgin kneeling at the pulpit, is typical of German painting from about 1470-1500. However, the foliage background representing the tree of life, seems to belong to a later period. The face of the Virgin was probably also painted at a later date.

It seems likely that the work is a later imitation eclectically derived from sources of different dates. It is difficult to say whether it is of the nineteenth century or earlier. Certainly, it must have been painted before 1855, the year it was purchased by the V&A.

Oil painting on the Christian theme of the Annunciation. Image depicts the Virgin Mary kneeling at a lecturn that bears a Hebrew inscription. To the left of the Virgin is the standing figure of the angel Gabriel bearing a scroll inscribed 'Ave Maria blenna (sic) gratium'. Dated on pulpit lower right '1472'. The foliage background represents the Tree of Life.

Historical significance: This appears to be an imitation of a 15th century work.
The composition of the Annunciation group with the Virgin kneeling at the lectern is typical of German painting of the last quarter of the 15th century. However, the foliage background seems to belong to a later period. In general terms, it is similar to German textiles of ca. 1500 (cf. The Circumcision, tapestry, Halberstadt Cathedral; B. Kurth, Die deutschen Bildteppiche des Mittelalters, iii, 1926, p. 338; The Mythical Chase of the Unicorn, embroidered hanging, Tyrolese, V. & A. Museum, T.79-1919; cf. also the decorative engravings of Schongauer: J. Baum, Martin Schongauer, 1948, figs. 108-12). But the large blossoms with curling, forked strapwork terminals would seem to represent Mannerist rather than Gothic design and could hardly be earlier than ca. 1530-40. In any case they hardly fit with the date 1472.
The drapery of the Virgin in particular is treated in a perfunctory manner and her face is equally unconvincing as a 15th century work. Nor can it be argued that this is due to later restoration, for there is no sign of overpainting on the face.
The date 1472 itself is not convincingly written; in particular the 7 with the downward curve in the upper part is unusual and this figure has also been interpreted as a 5. Yet if the date is read as 1452 the dichotomy between this and the 16th century appearance of the foliage becomes even more marked.
This painting was accepted as a genuine work of 1451 by W. Schone (1938), but it seems more likely to be a later imitation eclectically derived from sources of different dates. It is difficult to say whether it is of the 19th century or earlier; certainly it must pre-date 1855, the year of its accession to the Museum.
The foliage, which appears at first sight to be mere background filling, in fact represents the Tree of Life, the trunk of which may be distinguished extending upwards from behind the Virgin's back. The appearance here of God the father, the Christ child and the holy dove in the tree is paralleled in several 15th century German compositions and it is based on the authority of the Biblia Pauperum: ' ... In the middle of Paradise, that is to say in the womb of the blessed Virgin, God the Father planted the Tree of Life, to which He commanded now, with the co-operation of the Holy Ghost, His only Son to receive His human body of the most immaculate Virgin's blood and in Her womb without man's touch' (quoted and fully discussed by T. Dobrzeniecki, 'A Silesian relief of the Annunciation in the National Museum in Warsaw' in Bulletin du Musée National de Varsovie, vi, 1965, p. 116 ff., esp. p. 121 and figs. 1-2).

Oil on canvas; 'The Annunciation with the Tree of Life', German School, 19th century (?) 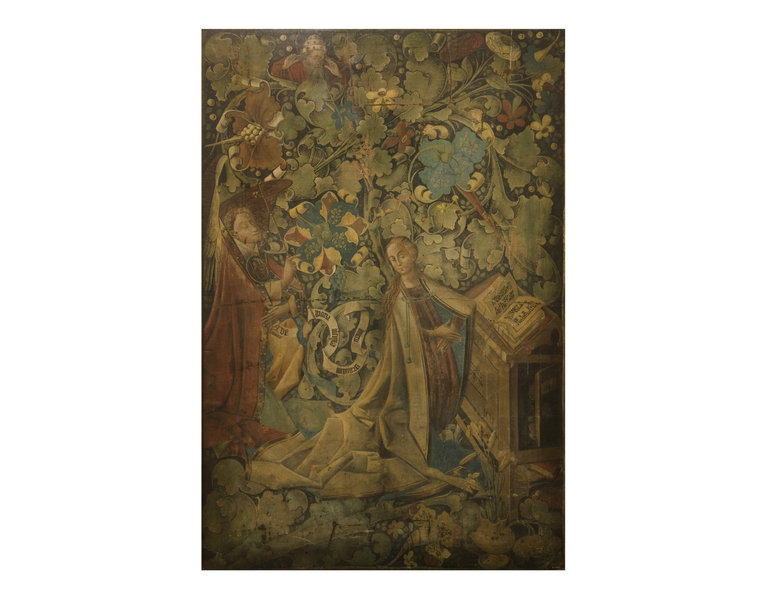