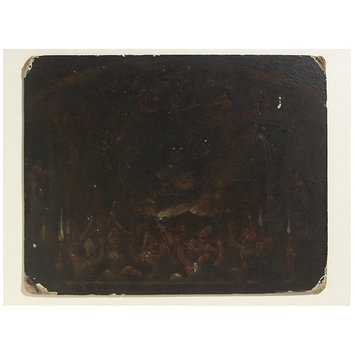 In Greek mythology Hades is the Lord of the Underworld. 'Hades' has also been used to refer to the dwelling place of the dead, over which the Lord of the Underworld presided. In this painting by George Cruikshank (1812-1870), it is unclear as to whether the Hades of the title refers to a person or a place, because central to the chaotic scene is a large and menacing creature.

Although it is unconnected to this oil painting, Cruikshank also produced an engraved Comic Alphabet, 1836, for which the letter 'O' was illustrated by a scene of the hero Orpheus playing a violin for Hades and his wife Persephone.

Cruikshank is best known for his humorous and satirical art work. Many of his images deal with the darker aspects of life. He also worked as an illustrator for the author Charles Dickens (1812-1870).

Darkened scene of Hades depicting a crowd in the foreground and a large-bellied central figure surrounded by imps and elves. Signed 'George Cruikshank', bottom centre left. Oil on millboard. On the back are skectches in chalk, including a full male figure and a male head.

Given by Mrs George Cruikshank, 1884

Born London 27 September 1792, son of the caricaturist Isaac Cruikshank, with whom he trained as a graphic artist perhaps as early as 1799. After James Gillray’s death 1815, he became the leading political caricaturist of the day. In the 1820s he turned to book illustration, receiving many commissions to provide plates for novels; the success of Dickens's Sketches by Box (1830) was largely due to Cruikshank's designs. In the 1840s his success and reputation declined, especially with the advent of Punch (1841). Many of his later works are concerned with the cause of temperance, and he enjoyed considerable success with his series of prints 'The Bottle' (1847). A prolific maker of prints during a long working life (there is an extensive collection in the V&A), the number of works in oil is small; he exhibited eight at the RA between 1830 and 1867 and 15 at the BI 1833-60, the subjects principally literary and genre. Died London 1 February 1878; a good deal of his studio collection was presented to the V &A by his second wife Eliza.

As mentioned in the entry for 'Tarn O'Shanter' (72-1880, p56), Cruikshank was very interested in the supernatural, and particularly the diablerie of texts such as Chamisso's Peter Schlemiel (which he illustrated for the edition of 1823-4). The present work is inscribed 'Tarn O'Shanter' twice on the upper stretcher, presumably by the artist's wife, first in pen and then in pencil."
pp.56-57
Parkinson, R., Victoria and Albert Museum, Catalogue of British Oil Paintings 1820- 1860, London : HMSO, 1990 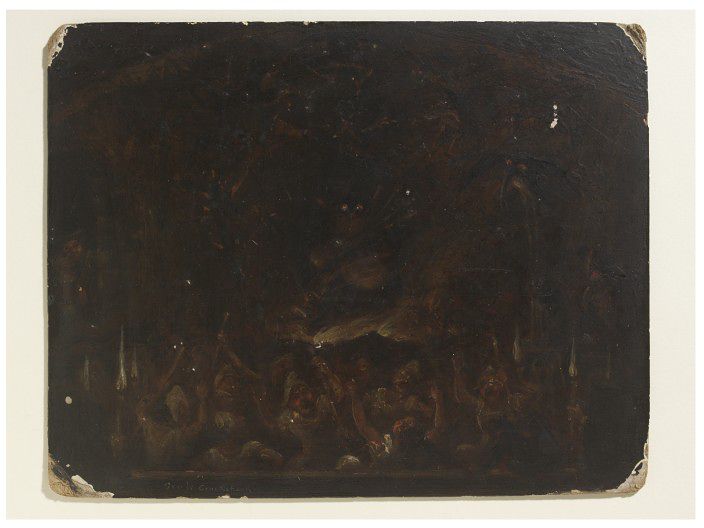