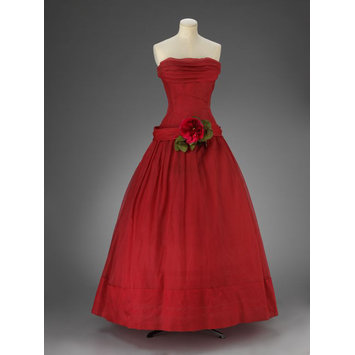 Dior named his Spring/Summer 1955 collection the ‘A’ line, as the letter ‘perfectly illustrated’ the new silhouette that featured narrow shoulders, loosely defined waists and flared skirts.

This ballgown was worn by the young debutante (and later novelist) Emma Tennant at her coming out ball on the 27th June 1955.

Christian Dior evening dress made from crimson silk organza.
The dress has a long, torso fitting strapless bodice, the top border covered in front with a drape of self material. The ample, full length skirt is gathered on to the bodice at hip level and is slightly fuller at the back. The gauging is covered by a cross over sash of self material, the loop trimmed with a large artificial red rose at the bottom with a made up single loop bow. These are attached on either side of the back zip. The hem is faced with a wide band of self material. The skirt is mounted over an under skirt of the same material similarly trimmed, the hem is interlined with nylon stiffening. Underneath this is a gathered pink nylon net petticoat, the back of the hem interlined with a double row of nylon net, the front with a single row. The bodice is lined with white net, stiffened with bones and with wire undercup brassiere supports. This fastens with hooks and eyes over which the dress zips.

Worn by Emma Cockburn (known as such during the period of her third marriage; née Tennant), one of the last debutantes presented at court. Donated by her mother, Lady Glenconnor.

Daughter of the second Baron Glenconner and Elizabeth Lady Glenconner, Emma Tennant was born in London in 1937. She was known as Emma Cockburn during the period of her third marriage. Educated at St Paul's Girls school, she was one of the last debutantes to be presented at court. Growing up in 'swinging' London in the 50s and 60s, she took an active part in the social and creative life of the city working as a travel writer for Queen magazine and then as features editor for Vogue. Married three times, with a son and two daughters, she became a full-time novelist.

In her novel The Adventures of Robina, by herself, memoirs of a debutante at the court of Elizabeth II (1986), Tennant's protagonist wears a similar dress as a debutante at court, although described as taffeta rather than organza; 'my red dress, this was from the greatest house in Paris and was of red taffeta, as has been told, cut on the bias and with a full skirt which flared out at the hip, but not before receiving, pinned low on the stomach where the material was stretched excessively tight, a red rose such as only the parisians can make, of fine cloth, exquisite with petals and foliage' (p. 118-9).

In her first autobiography Girlitude: a memoir of the 50s and 60s (1999), which covers her experiences from 18 to 30, Tennant desribed this dress; 'a dress from Dior in Paris, scarlet organza with a rose in its foliage mid-sotmach' (p. 12); 'easily fastened and almost indestructible, being built with whalebones and further strengthened with what appeared to be a beige baize stiffened with wire' (p. 15).

The donor is Lady Glenconnor, of Villa Rovinia in Corfu built in the 1960s by Lord and Lady Glenconner. The Villa was visited by the Royal Family and socialites, and the area known as 'Kensington-on-Sea'. The Villa was sold in ca. 2004. The Villa is described by Emma Tennant in her book A House in Corfu.

Novelist Emma Tennant was presented as a debutante in 1955. Both she and her mother, Lady Glenconner, ordered dresses from Dior in Paris for her coming out ball. Tennant’s choice of a red strapless gown was unusually sophisticated at a time when white and pastel colours were deemed suitable for young girls. She recalled the dress as ‘easily fastened and almost indestructible, being built with whalebones and . . . a beige baize stiffened with wire’. 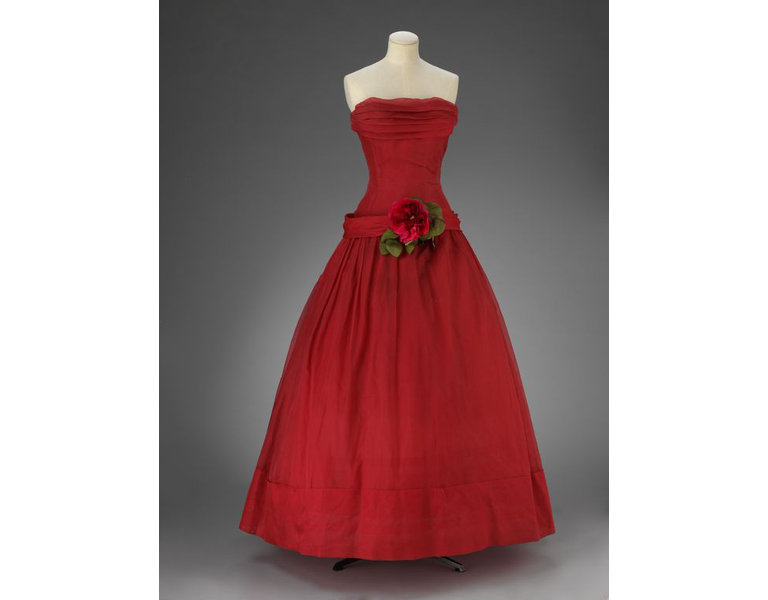