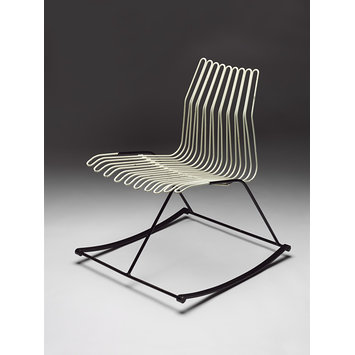 The Kangaroo chair is one of the most important examples of Ernest Race's work. It not only represents the most brilliant of his bent steel furniture designs but was also created for one of the most important buildings commissioned in London during the 1950s - the Time Life Building designed by Michael Rosenauer. Henry Moore produced one of his most important architectural works for the screen at the top of the building and was also commissioned to produce a reclining figure for the terrace. The Kangaroo chair was also designed for the terrace, though examples were also used within the interior. The Kangaroo was made in two models, a chair and a rocking chair.

The seat and back of the chair are formed from one continuous length of steel rod approximately forty-five feet long, which was cold bent on a jig. This process was only made possible by keeping the factory doors open in order to accommodate the rod's unbroken length. According to Alexander Gardner-Medwin, Race's initial inspiration for the design of the Kangaroo came from the structure of the wire grid of a grill tray of a gas cooker.

The seat and the back are formed from one continuous length of steel rod, approximately 45 feet long. The steel rod is bent nine times at the top of the back and ten times at the front edge of the seat. The rocking part is made of flat section steel.

The chair is the most important example of Race's bent steel furniture designs. It was created for the Time & Life Building, New Bond Street, London. The 'Kangoroo' was designed for the terrace, but was used also within the interior. It had a chair and a rocking chair version. The seat and the back are formed from one continuous length of steel rod, which was cold bent on a jig. For this process they had to keep the factory doors open to accommodate the rod's unbroken length. The structure of the wire grid of a grill tray of a gas cooker gave the inspiration for the design (according to Alexander Gardner-Medwin).

The chair was a gift from Race to one of his friends, the textile designer Marianne Straub. She made a gift of this chair to the painter Walter Hoyle. Hoyle owned it until 1996 when he sold it to the fashion retailer and entrepreneur Tommy Roberts, founder of the iconic boutiques Kleptomania and Mr. Freedom.

Historical significance: Only two extant examples are known of this model. One has been kept in the garden, it's condition is poor. The V&A's example is in a very good condition.

The Time & Life Building is one of the most important buildings commissioned in London during the 1950s. It was designed by Michael Rosenauer. Henry Moore produced the sculptural works of the screen at the top of the building, and was also commissioned to make a reclining figure for the terrace.

Attribution note: The chair was commissioned for use on the roof terrace of the Time & Life Building, London, not for commercial production. 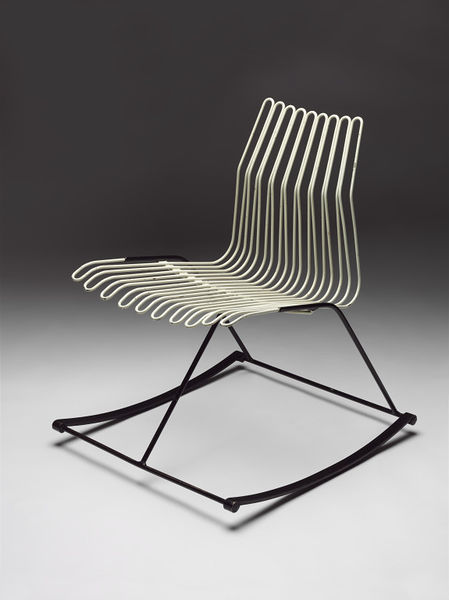