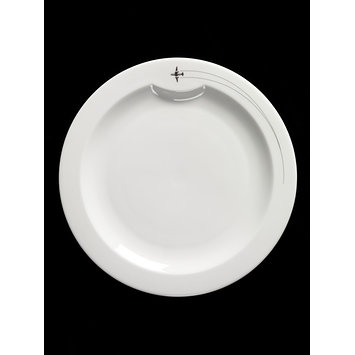 This tableware was designed for the Upper Class service of Virgin Atlantic. Its modern, colourful look was chosen to complement the cabin interiors. The range of items reflects the need to serve passengers different types of meal as they journeyed across time zones.

Plate, of circular shape, the flange decorated with a platinum decal transfer with an aeroplane logo. Dudson Article code 2YED246X, 'Large Plate'. The body used is what Dudson term their 'Fine China' body. Ian Dudson has commented on this as follows: "David [Queensberry] is quite right when he says that the characterisation of bodies is almost impossible along the traditional longstanding body types such as bone china, porcelain and earthenware. We call our white body, translucent, non bone body – Fine China. It could be described as a porcelain because it displays all the characteristics for that description but it would be a “soft paste” style because it has two high temperature firings, the first one being the highest temperature. This is as opposed to a hard paste where there is a relatively low first firing and a much higher second or glaze firing temperature. We chose however when the body was invented back in 1986 to call it Fine China because again it displays all the characteristics that are used in controlling the use of the word China such as translucency. The only thing that we cannot call it is Bone China because it does not have any Calcium Phosphate addition. In any event today I am not sure we would want to promote Bone China given the increasing awareness of its environmental implications."

'virgin / atlantic' below which Dudson trade mark of a 'D' within a triangle, together with an 'R' within a circle, and 'DUDSON / ENGLAND', printed in black on base.

Part of a range of tableware designed by Queensberry Hunt Levien for Virgin Atlantic Airways, and manufactured by Dudson Ltd. The commission followed an approach to David Queensberry by Gavin Pryke, a designer working for Virgin who was involved in the redesign of their Upper Class cabin. As a result, Queensberry Hunt Levien signed an agreement with Virgin Atlantic in April 1998. QHL recommended that Virgin approach Dudson in connection with the product development and manufacture of the range. This advice was accepted.

Of the commission, David Queensberry writes: "We had various meetings and were shown the mock-up that had been built of the interior of the Upper Class section of the aircraft. The interior was hyper-modern, with red-leather upholstery and a cocktail bar. In order to fully appreciate Virgin’s Upper Class service, it was agreed that Martin, who would undertake the design work, should fly to Tokyo and New York as a passenger. The service of food on an aircraft is complex and Virgin decided that due to the various time zones, passengers will not all require the same meals, at the same time - one passenger may need just a snack, whilst another may require a substantial meal. This created a requirement for more tableware items than would normally be needed on an aircraft. There are also logistical problems as the storage and cooking facilities on an aircraft are very limited and the tableware had to operate within these restrictions, as well as coordinating with the modern and colourful interior design." Ian Dudson adds to this that: "The clear objective was to re-set the Virgin Upper Class service apart from other Business Class products and portray it as a First Class product at a Business Class price. An example of this I recall was the instruction that the main serving plate could not be square or rectangular but had to be round because no other Business Class service offered round plates. Hence the creativity that came into the rim shape to facilitate a logo etc."

The original range was produced with platinum decals on some of the items, but these were later omitted in order to minimise cost. The items acquired here (C.245-2009 to C.260:1, 2-2009) represent the complete range as originally designed. Among the pieces are some taken from current production, while others, including those that were originally produced with platinum decals, have been supplied from the Dudson showroom archive and were manufactured around 1999.

This plate was supplied by Dudson Ltd. from their showroom archive.

This tableware was designed for the
Upper Class service of Virgin Atlantic.
Its modern, colourful look was chosen
to complement the cabin interiors.
The range of items reflects the need to
serve passengers different types of meal
as they journeyed across time zones. 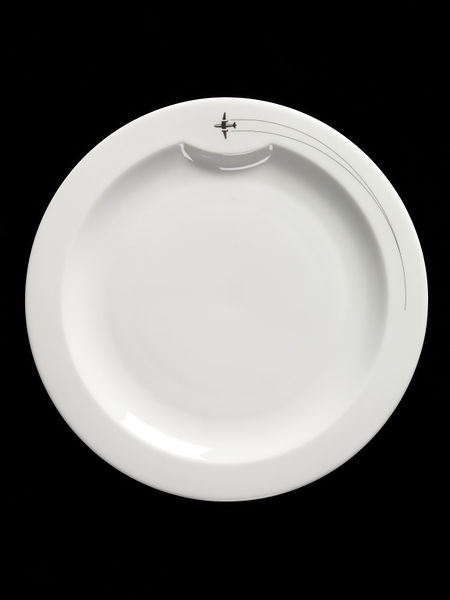