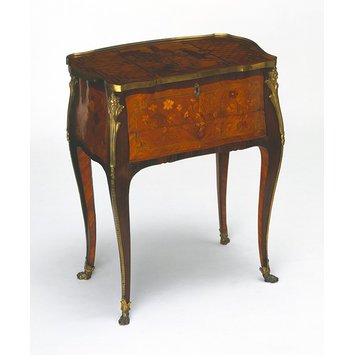 The design on the top of the small writing table is taken from the frontispiece to Jean-Charles Delafosse's Quatrieme livre des trophées, which was published shortly after 1776. Delafosse (1734-89) was a French architect, designer and engraver, whose designs were published widely throughout Europe. The use of his frontispiece demonstrates the way in which 18th-century marqueteurs used contemporary prints as sources for their work. Here a fashionable Neoclassical design has been combined with a serpentine form, which would have been old-fashioned in Paris by the time the desk was made.

Small writing table on four cabriole legs, with two drawers. The case is oak, with veneers and marquetry of purplewood, tulipwood, sycamore and other woods. The drawers are mahogany, the mounts are gilt brass.

The table has a serpentine profile, with slight bombé curves to the sides. It is veneered on all sides, with tulipwood veneers on the inside of the legs and purplewood veneer on the outside of the legs and around the marquetry. Each side of the case is decorated with a large marquetry panel showing a floral composition. At the centre of the table top is a marquetry scene of architectural ruins and a classical figure, surrounded by a diaper patterns.

The table was altered in the 19th-century, when the drawers were added. It is possible that the top was also originally adjustable.

oak, with veneers and marquetry of purplewood, tulipwood, sycamore and other woods; mahogany with gilt brass mounts.

This writing table was given to the Museum in 1882 as part of a large bequest from the military tailor and businessman John Jones. Mr Jones collected mainly 18th-century French art and decorative art, and his bequest still forms the backbone of the V&A's French 18th-century collections.

Small tables such as this were very common in French 18th-century interiors. The table is veneered on all four sides, reflecting the way in which it would have been used - it would have sat in the middle of a room and been moved around depending on the time of day. Used as personal furniture by both men and women, small writing desks were kept in bedrooms and sitting rooms.

This table bears the stamp of Adrien Delorme, a cabinet-maker with premises on Paris' rue du Temple. Delorme retired in 1780.

Veneered with kingwood, tulipwood and marquetry of various woods. The body of this piece was considerably altered during the 19th century but it remains an attractive and well executed piece

The remarkably fine marquetry picture on the top is taken from the frontispiece of J.C. Delafosse's 'Quatrième livres de trophées', the publication of which began in series shortly after 1776. Adrien Delorne was a dealer who mostly commissioned work from other cabinet-makers which he then stamped with his name and sold at his premises in the Rue du Temple. He retired in 1783. 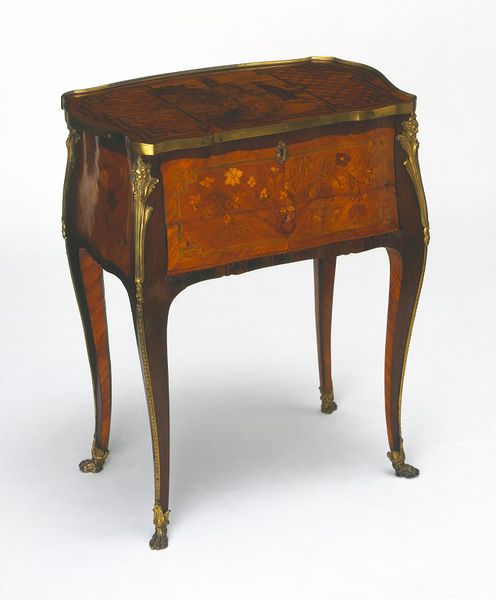