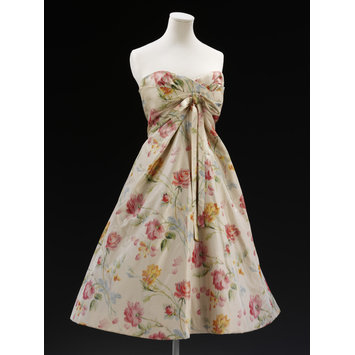 This strapless dress was worn by Laurie Newton Sharp, News Editor for Harrods, for a 1956 goodwill tour to America to promote the store. It was said that she was 'the sort of impeccably elegant woman who carries an invisible mirror with her'.

In an interview with the News Chronicle just before her trip, she said: 'I prefer to have a few good basic clothes, and then to be extravagant with hats and gloves. I would not buy a material that creases; or an accessory which did not match; or a colour which did not suit me. This means that when I begin to dress I can’t go wrong'.

This dress, by Christian Dior (1905-57), was originally designed in plain white silk. Mrs Newton Sharp ordered it in this expensive floral print to suit her colouring. The outfit was completed with a top-coat of plain pink silk satin.

One-piece strapless evening dress of chiné rose patterned cream silk taffeta. Shaped and draped at the bust, fitted at the waist with the skirt flaring gently out. The drapes from the centre of the bust, which are held by a long tagged ribbon bow, flow into the skirt. It fastens at the centre back and is lined with white voile.

The dress was worn by the donor. The dress was ordered in the Paris salon and made in the French ateliers, although it is described in the News Chronicle as London Dior for publicity reasons, as the donor, Mrs. Laurie Newton Sharp was the News Editor for Harrodsand on a trip to America to publicise the store. She was the first person to hold the position of News Editor, which was created in 1953, to supervise the store's press and public relationships.

The label was cut out as the donor wanted to present it as a London Dior.

The dress was worn with a pink organza coat, not given, but described as simple and full. Dior commended Mrs Newton Sharp's appearance in the dress. His original design for the dress was in plain white silk.

Described as ‘among England’s best-dressed women’, Laurie Newton Sharp was director of publicity at the prestigious London department store Harrods. In 1956 the British daily News Chronicle interviewed Newton Sharp about her stylish wardrobe, praising her collection of Christian Dior clothes. She purchased this evening dress, she said, ‘for grand summer occasions’.

This short dress was worn by Laurie Newton Sharp, buyer for Harrods, for a 1956 goodwill tour to America to promote the store. It was said that she was 'the sort of impeccably elegant woman who carries an invisible mirror with her'. 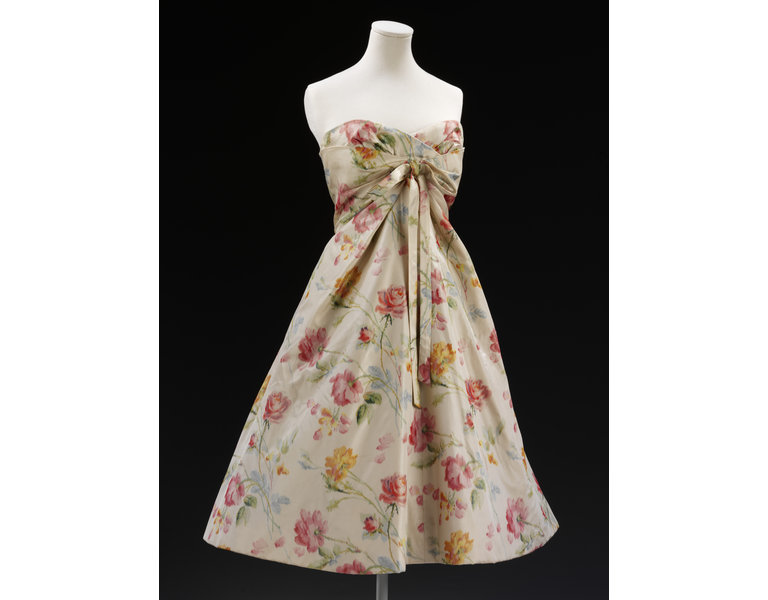