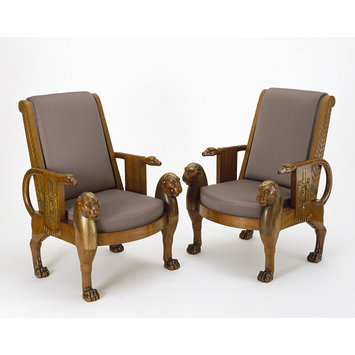 Object Type
This is one of a pair of armchairs that were first recorded at the Christie's sale of the Hope heirlooms from Deepdene, Surrey, the country house of Thomas Hope (1769-1831) on 18 July 1917, lot 140. (They sold for £21.) No certain record exists to confirm that the chairs were in the house during the 19th century. However, in 1819 the novelist Maria Edgworth visited Deepdene, and described 'a bed made exactly after the model of Denon's Egyptian bed, a sofa bed wide enough for two aldermen'. This bed was probably en suite with the pair of arm chairs.

Design & Designing
A similar pair of chairs was in the collection of Baron Dominique Vivant Denon (1747-1825). Denon was a museum director in Paris and a great Egyptologist. He was in Egypt during Napoleon's campaigns there, quickly writing up his experiences as Voyage dans la Haute et Basse Egypte, published in 1802. His monumental Description de l'Egypte appeared between 1809 and 1822. Denon copied a number of designs for chairs from the walls of ancient Egyptian tombs, including several which relate to this chair. Thomas Hope, in turn, may either have bought the chairs from the sale of Denon's collection or commissioned chairs and a bed to be made in Denon's Egyptian style.

Based on drawings published by Baron Dominique Vivant Denon (born in Chalon-sur-Saône, France, 1747, died in Paris, 1825); made by the firm of Jacob Desmalter, Paris

The pair of chairs were first recorded in 1917 at the Christie's sale of the Hope heirlooms from Deepdene, Surrey, the country house of Thomas Hope (1769-1831) on 18 July 1917, lot 140 (bought Clark for £21). Though no clear record of them in the house during the nineteenth century exists, in 1819 the novelist Maria Edgworth visited Deepdene and described '...a bed made exactly after the model of Denon's Egyptian bed, a sofa bed wide enough for two aldermen'. Regarding the time span during which they were made (1803 to 1813), Thomas Hope was in Paris in the 1790s, in the spring of 1803 and again in 1815-1817. It is possible that he acquired a bed and a pair of chairs similar to those of Denon either during his 1815-1817 visit, or that his banking connections permitted him to order them from France during the war years. After their sale from Deepdene in 1917, the chairs were acquired by Edward Knoblock, who kept them at The Beach House, Worthing, Sussex (illustrated there in Country Life in 1921); sold after his death by Sotheby's, 8 March 1946, lot 137; bought by Ian Phillips, Charlton Mackrell Court, Somerset; sold posthumously Christie's 16 November 1995, lot 344.

The other armchair is now in the Walker Art Gallery, Liverpool (purchased at the same time as this one was bought by the V&A).

In 1929 one of the pair of armchairs (then owned by Edward Knoblock) was exhibitied in the Loan Exhibition of English Decorative Art at Lansdowne House (see refs.). It was then described as having been designed by Thomas Hope, about 1805

The Denon Chair; armchair in solid mahogany, made by Jacob-Desmalter.

British Galleries:
Thomas Hope frequently visited France, where his enthusiasm for the Egyptian style was widely shared. French scholars had travelled to Egypt with Napoleon during his military campaign and had brought back illustrations of ancient Egyptian objects. The design of the chair is based on a couch found inThebes. [27/03/2003]
Gallery 8 1996-2002
This chair was one of a pair made for Baron Dominique Vivant Denon (1747-1825), celebrated antiquarian, taste-maker and Director of the Louvre. They were listed in the sale held after his death, and may have come to Britain at that time. Denon was much admired by Thomas Hope (1769-1831), who popularised the Egyptian revival in England. This chair, and its pair (now in the Walker Art Gallery, Liverpool) were bought from Hope's country House, Deepdene, by the collector Edward Knoblock in 1917. The firm of Jacob-Desmalter, the most fashionable furniture maker in Paris during the Napoleonic period, made the chairs. [] 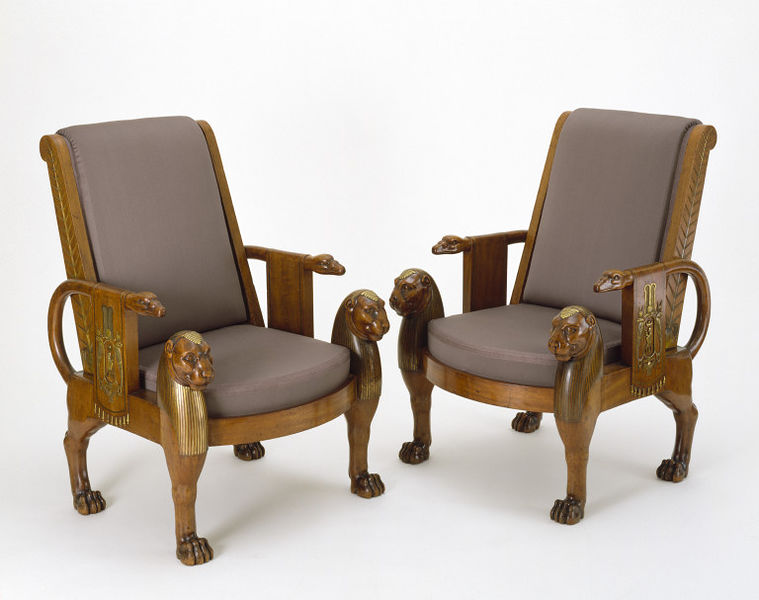