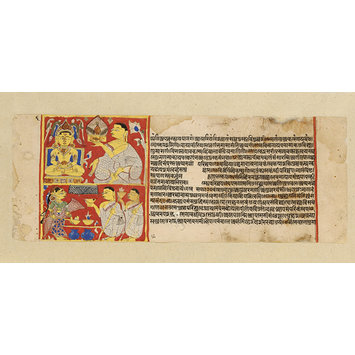 This is a folio from a manuscript of the Uttaradhyayanasutra, a Jain text. Jainism is one of the oldest living religions in the world and had emerged in India by around the 6th century BC. Its best-known ideal is non-violence. Jains revere 24 Jinas (spiritual victors) or Tirthankaras (fordmakers), who showed the way to achieve liberation from the ocean of birth and rebirth.

The Uttaradhyayanasutra is believed by members of the Shvetambara sect of Jains to contain the last teachings of Mahavira, the 24th and last Jina, considered to be the historical founder of Jainism. This canonical text is concerned with the rules of behaviour that govern monastic life. The Uttaradhyayanasutra is classified as a 'Mula' or 'fundamental' work of Jain scripture.

This Uttaradhyayanasutra manuscript is one of the earliest known illustrated versions. It lacks the lavish use of gold and ultramarine blue seen in many contemporary and later manuscripts but its fine illustrations are notable for the quality of line, harmonious colour balances and the often lively and unusual compositions.

The illustration on this folio is concerned with the false ascetic.

Folio recto, opaque watercolour and ink on paper, from a manuscript of the Uttaradhyayanasutra. One of 46 leaves on light-brown paper. The text, written in black ink, is in 15 lines. Not all folios are illustrated but the illustration, where present, is on the left and is roughly square in shape. In the centre of each page the text is interrupted by a lozenge-shaped blank space. There are thin double-ruled black margins filled with red. Gold is not used in this manuscript.

This folio recto (this side) has the illustration for chapter (or lecture) 6 khuḍḍāga-niyaṇṭhijjaṃ chaṭṭhaṃ adhyayanaṃ or 'The false ascetic' (tr. Jacobi). In the upper register a monk (right) is seated beside a seated Jina (left). In the lower register two monks are receiving alms from a woman, who appears to be ladling food into their alms bowl. This topic is mentioned in the text of the chapter. The illustration does not obviously relate to the story of 'the Magic Art and the pot', a story which appears in the commentary on the text and which is frequently the subject of the illustrations to chapter 6, as shown in W. Norman Brown, Manuscript Illustrations of the Uttarādhyayana Sutra, American Oriental Society, New Haven, 1941, plate 6 and p.11.

The text on this side of the folio contains the second part of verse 9 to the end of chapter 6 'The false ascetic', and the first four and a bit verses of chapter 7 'The parable of the ram etc'.

Painted in opaque watercolour and ink on paper

A folio from the Uttaradhyanasutra, a Jain text containing the last teachings of Mahavira. This canonical text set out the rules of behaviour for the monastic community.

Jain monks have traditionally been supported by a much larger lay community, who gained spiritual merit by commissioning manuscripts, which were preserved in temple libraries. Jainism has two sects, Shvetambara and Digambara, and the illustrated manuscript to which this folio belongs was painted for Jains of the Shvetambara sect. Surviving Jain manuscripts show that a distinctive Western Indian painting style had developed by the 12th century.

The earliest Jain manuscripts were written on palm leaf with painted wooden covers but during the 14th century paper came into general use for illustrated manuscripts. One feature that can be seen in this manuscript is the interruption of the text with a lozenge-shaped blank space to allow for the perforation of a binding cord. In fact, no such hole has been made. This is a reminder that medieval paper manuscripts in this format were still following in some respects the conventions of the long narrow strips of the palm-leaf manuscript.

This manuscript bears a later colophon stating that it was produced at Stambhatirtha in Cambay on the Gujarat coast, which was a major port and hub of Jain mercantile activity.