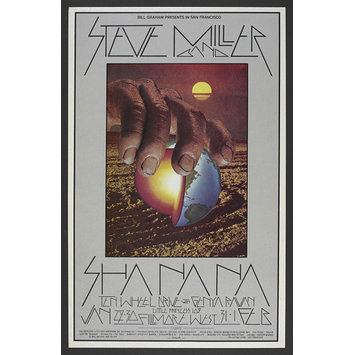 The creator of this poster, David Singer, was an untrained artist doing odd jobs for graphic design companies around San Francisco. He had been interested in collage from an early age, taking inspiration from the surrealism of Max Ernst and Magritte, combining this with the counter-culture of the 1960s. After showing several pieces to Bill Graham, he was hired to produce 12 posters, which Graham liked instantly, as the lettering was legible, a departure from the previous poster art of the Fillmore. Singer worked for Graham right up until the closure of the Fillmore in 1971, for which he created the final design; he was reaching his zenith, adapting Art Deco and Art Nouveau lettering, using collage and freehand drawing to create distinctive graphics, when the venue shut in the summer of 1971.

This poster advertised a line-up headlined by the Steve Miller Band, who often played the Fillmore after moving to San Francisco in 1965 for the psychedelic scene in the early days of their career. They were supported by Sha Na Na, a group formed in 1969, who, wearing gold lame jackets and pompadour haircuts, simultaneously invoked 1950s rock and roll nostalgia and sent it up. 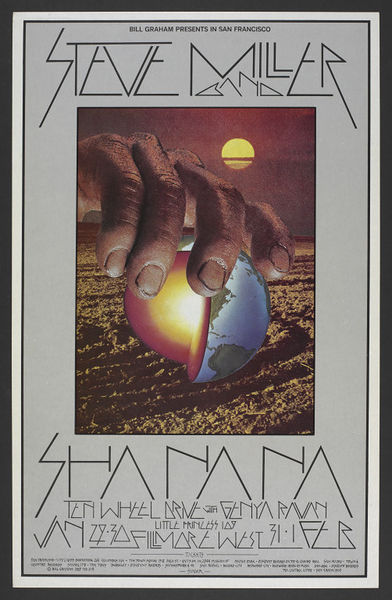