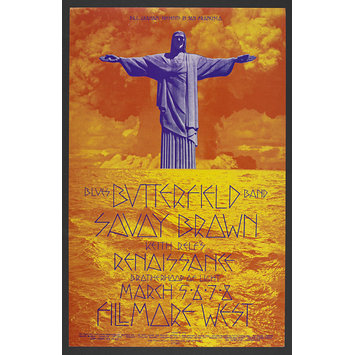 The creator of this poster, David Singer, was an untrained artist doing odd jobs for graphic design companies around San Francisco. He had been interested in collage from an early age, taking inspiration from the surrealism of Max Ernst and Magritte, combining this with the counter-culture of the 1960s. After showing several pieces to Bill Graham, he was hired to produce 12 posters, which Graham liked instantly, as the lettering was legible, a departure from the previous poster art of the Fillmore. Singer worked for Graham right up until the closure of the Fillmore in 1971, for which he created the final design; he was reaching his zenith, adapting Art Deco and Art Nouveau lettering, using collage and freehand drawing to create distinctive graphics, when the venue shut in the summer of 1971.

This gig featured the Butterfield Blues Band, who had previously performed with Bob Dylan at the Newport Folk Festival in 1965, during the infamous concert where he was backed by electric guitar for the first time. They were supported by Savoy Brown, a British blues band from the 1960s that toured the USA non-stop and were hence far more successful there than in the UK. Also playing was Renaissance, the progressive rock act fronted by Keith Relf, former lead singer of The Yardbirds. 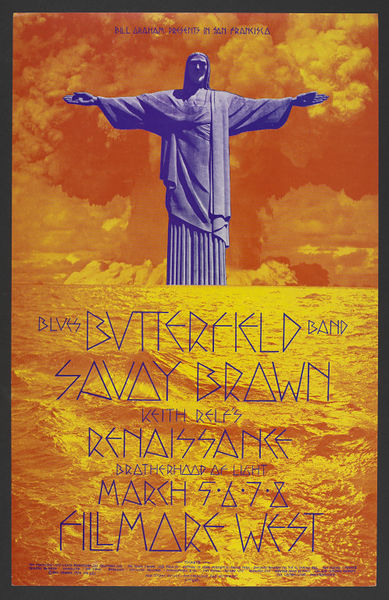