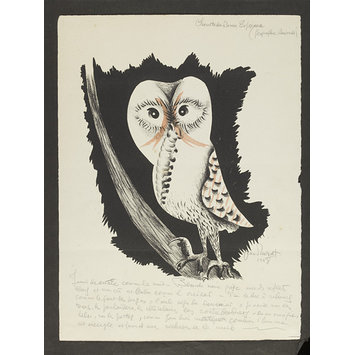 This image by Jean Lurçat (1892-1966) forms part of a collection of owls amassed by poet scholar Walter Strachan (1903-1994). It is entitled ‘Chouette de Bonne Esperance’ (The Owl of Good Hope) and belongs to the artist book Géographie Animale, published in 1948 by Editions André Gonin. This work features 18 lithographs with poems also written by the artist. The poems were composed to take the shape of the image printed on the opposite page. Each image was of a different animal. References to the Resistance movement, of which Lurçat was a member during the 1939-1945 war, feature in the book. This book echoes the tradition of the Bestiary, in which animals represented particular human traits. The Bestiary was a subject that particularly interested Lurçat. He studied medieval tapestries and wrote Le Bestiaire de la Tapisserie du Moyen Age. He also illustrated several of them, including Bestiaire fabuleux by Patrice de La Tour du Pin in 1951 (published by Darantière) and an edition of La Fontaine’s fables published by André Gonin) in 1950. Bestiaries first started to appear around the 12th century and took as their source the Physiologus written in Alexandria around the 4th century, which added a moralizing element to even earlier animal lore. Other sources were variously used, such as Isodore of Seville, Hugh of Fouilloy, Solinus, Rabanus Maurus and later, Bernard Silvestris and Bartholomeus Anglicus.

A two dimensional decorative quality can be seen in his print illustrations, a feature that spilled across from his tapestry designs. Lurçat is particularly renowned for his tapestry designs and his tapestry work featured in an exhibition at the V&A in 1949. Lurçat revived traditional techniques and started the Aubusson school of tapestry; Strachan recalls a memorable visit to Lurçat’s château at Les Tours Saint-Laurent in 1952, where he had gone to see some of the artist’s illustrations but was equally impressed by the magnificent tapestry made for the Palais des Nations. Other artists whose illustrations feature in Strachan’s collection of owls, such as Raoul Ubac and Jean Picart-le-Doux were also involved in this revival.

Walter Strachan was fascinated by the art of the book. His interest was inspired by a visit to an exhibition of artists’ books at the National Gallery in London in May 1945. In due course he wrote many articles on the subject, as well as a major reference work, The Artist and the Book in France (published 1969); he also encouraged successive Keepers of the National Art Library at the V&A “to buy them for England.” To this end he visited France every year, to meet the artists, and acquired proof pages to illustrate his articles and to show to potential purchasers of the books, including the V&A. Over the years he amassed a collection of images of owls; some of these were illustrations from livres d’artistes, and others were designed especially for him as gifts or greetings. The collection of owls began with a visit to the artist Roger Chastel (1897-1981) in 1952, where he witnessed the printing of Le Bestiaire de Paul Eluard. In a subsequent article (“Genesis and Growth of a Collection”, for Connoisseur, 1972) he explained: “My article on Chastel’s Bestiaire had the happy result of bringing me a special print on Auvergne paper of the owl which I had admired in the book. Contacts in the art-world of Paris are close and friendly, and I was marked down as an owl-man, in consequence of which I have gradually been given dedicated owl prints and originals in every medium from pen and ink to enamel…”

Lithograph, hand-coloured in pink wash, showing an owl on a branch. The branch is black and white. The owl is white with black line and pink highlights and set against a black background. The title of the piece and name of the book for which it is intended, Géographie Animale, is written in pencil at the top right of the image. On the back of the sheet are pasted speciment sheets of handwriting from Bishop Stortford College, 1955-1956, where Walter Strachan taught calligraphy.

Lithograph on paper, hand-coloured with wash

This forms part of a collection of prints, drawings and paintings of owls bequeathed to the V&A by Walter Strachan (1903-1994). Strachan, a scholar and collector of Livres d'Artistes, became friendly with a large number of artists, who, on hearing that he had a fondness for owls, began sending him images to add to his collection. 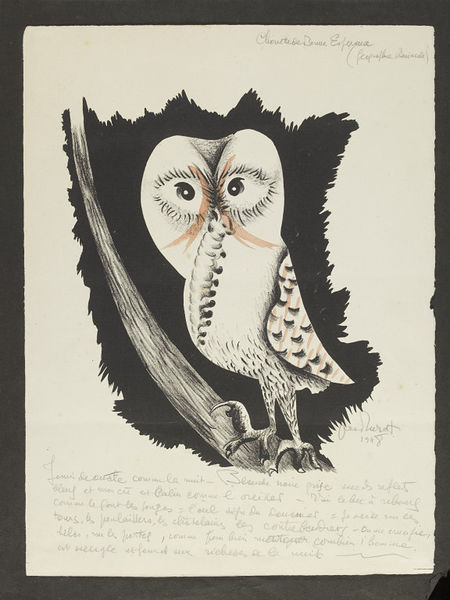