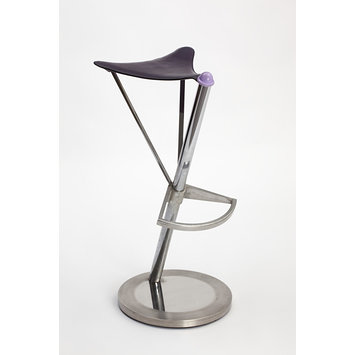 The Frenesí Bar Stool, whose name translates into English as 'Frenzy', was designed by the design group Transatlàntic, formed by three Spanish designers: Ramon Benedito (b. Barcelona, 1945); Lluìs Morillas (b.Barcelona, 1958) and Josep Puig (b.Terrassa, 1955). The stool was part of the group's Sensual Furniture project ('Mobiliaro Sensual: Metamorfosis') which was intended to bring erotic content into the context of stylish furniture. The Frenesí, for example has a phallic diagonal support, highlighted comically by a pink rubber tip, the leather seat gathers itself around the sitter's rear. This is an unusually explicit example of the provocative, image-driven design that was typical of 1980s Postmodernism.
The chair was not designed for a particular interior but bar use in general. The 'design bar' was a characteristic phenomenon of the Spanish Postmodernism. It was a highly-orchestrated and sometimes thematic space for drinking cocktails, seeing and being seen. Though such bars existed in Madrid, the most famous and fashionable ones were located in Barcelona.

Stainless steel bar stool with a triangular leather seat suspended from a diagonal support. The support is connected to one side of the inner circle of the base which has a broad rim. A footrest is made of aluminium profiles forming a triangular frame with a half-round and two straight sides with an open circle at their point of connection which functions as a mount for the support, connecting the support to base and seat as well as two extra steel profiles to the back corners of the seat. The tip of the diagonal support is connected with the front edge of the seat with a pink foam rubber half round with a rim on its top. The two back edges of the purple leather are made with sleeves that hold the back profiles in place.

The Frenesí Bar Stool was one of a group of four pieces designed by the Spanish group 'Transatlàtic'. The pieces are: the Intima (Intimate) Bar, Sedutora (Seductive) Chair, Mesamela Table and the Frenesí (Frenzy) Bar Stool. The project was entitled 'Mobiliaro Sensual: Metamorfosis' (Sensual Furniture: Metamorphosis). It was intended to bring erotic content into the context of stylish furniture. Puig says in an interview (2010) quoting Màrius Carol: 'This first programme of sensual furniture consist(ed hic) of provocative avant-garde objects that blend irony and provocation, the wink and the smile.' The Frenesí stool, for example, has a phallic diagonal support, highlighted comically by a pink foam rubber tip; the leather seat gathers itself around the sitter's rear. This is an unusually explicit example of the provocative, image-driven design that was typical of 1980s Postmodernism. Though intended for bar use, the group of furnitures was not designed for a specific interior.

Historical significance: Spanish design in the 1980s was, to a large extent, an offshoot of the Postmodernism that had been pioneered in Italy. However it also had distinct characteristics. One of these was the phenomenon of the 'design bar'. It was a highly-orchestrated and sometimes thematic space for drinking cocktails, seeing and being seen. Though such bars existed in Madrid, the most fashionable ones were located in Barcelona.

The group 'Transatlàtic' was formed in 1983 by Ramon Benedito, Lluís Morillas and Josep Puig. The designers named themselves in the manner of a luxury liner. Puig recalls, they were looking for a name that evoked sophistication, luxury in a way and international connection (union between continents). The name was also intended to express the connection with artistic and cultural movements of the moment. The group had strong connections to the Italian radicals through Benedito and they were also well aware of Sottsass's work. The group broke up in 1989, when the members decided to return to their own studios full time.

Frenesí Bar Stool, made of stainless steel with aluminium footrest; designed in 1984 by Transatlantic (Ramon Benedito, Lluís Morillas and Josep Puig), manufactured by Akaba S. A. from 1987 to 1998

The three designers worked as a group called Transatlàtic(1983). 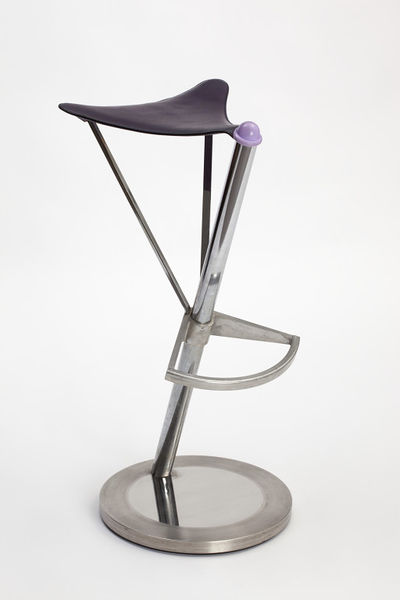