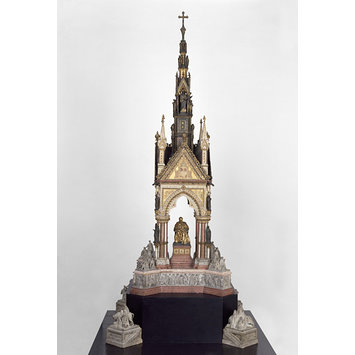 Object Type
This is the model for the memorial to Prince Albert, the Prince Consort (1819-1861), in Kensington Gardens, London. Soon after his unexpected death a meeting was held to consider how best to commemorate him. As a result a number of architects were invited to submit designs, and the commission was awarded to Sir George Gilbert Scott (1811-1878). In 1863 more detailed discussions about the design took place, and drawings and models were made. These included this model, which was initially displayed at Buckingham Palace, London, for Queen Victoria's approval. Although there are some changes between this model and the finished monument, in essence it reflects the final form of the memorial, which was erected in 1873. The gilt-bronze figure of the Prince Consort by the sculptors J.H. Foley (1818-1874) and Thomas Brock (1847-1922) was installed in 1875.

People
The model was designed by Sir George Gilbert Scott. He was one of the foremost Victorian architects and best-known exponents of the Gothic Revival. He was particularly productive in the 1850s and 1860s, and his design for the Albert Memorial was much admired at the time. He chose a team of craftsmen to work on it who had collaborated with him on previous projects. These included the sculptors Henry Hugh Armstead (1828-1905), John Birnie Philip (1824-1875) and J.F. Redfern (1838-1876); the stone-carving firm Farmer & Brindley; the ironworker Francis Skidmore (born about 1816, died 1896); and J.R. Clayton (1827-1912) and Antonio Salviati (1816-1890) for the mosaics. The model was made by Farmer & Brindley. Henry Hugh Armstead made the sculptural groups on the model. Scott wrote of these: 'I doubt whether either the central figure or a single group, as executed, is superior to the miniature models furnished by Mr Armstead.'

Ownership & Use
The model was used during discussions in 1863 about the design of the memorial. It was later displayed at the 1867 Paris International Exhibition. In 1871 it was officially loaned to the South Kensington Museum (later the V&A), and presented to the Museum by Sir George Gilbert Scott in 1873. It was put into storage and not formally registered until 1973, when it was re-discovered by John Physick, then Deputy Director of the Museum.

The model consists of a seated figure of Prince Albert beneath an elaborate canopy above there is a fleche, decorated with emblematic figures of angels, the whole surmounted by a cross. The statue of is placed upon a raised base, the sides of which are decorated with friezes representing painters, poets, authors and architects. At the corners of the base are four groups representing the industrial arts. Four more groups representing the Continents are placed a little distance away from the podium.

The model is made from individually cast plaster pieces, which are supported by a metal framework.

It is decorated using various techniques to simulate the range of materials used in the finished memorial. Mosaic are represented by gilded and painted pieces of paper, glued to the pediments beneath the canopy. The column shafts, the bases to the four large sculpture groups, the model floor and the steps are decorated with a scagliola-like technique to simulate granite. Other parts, including the friezes around the base, were painted with a thick greyish white paint imitative of stone. A layer of metallic bronze paint was discovered beneath this greyish white paint on all of the sculpted groups (but not the friezes). This suggests that large sculptural groups on the memorial were originally intended to be cast in bronze rather than carved in stone. The figure of Prince Albert is gilded.

Plaster, coloured, gilded and polished on a metal armature

'Armstead Sculpt.'
on left side of Prince Albert's throne

'POESIS' [and] 'PICTURA' [and] 'SCULPTURA' [and] 'ARCHITECTURA'
on the four paper mosaics representing the arts of Poetry, Painting, Sculpture and Architecture

The model was displayed at Buckingham Palace so that it could be referred to during discussions about the design of the memorial. The model was later displayed in the 1867 Paris Exhibition. On its return it was deposited at the South Kensington Museum. It was officially loaned to the museum in 1871, through the sculptor Matthew Noble, and finally presented to the museum by George Gilbert Scott in 1873, although it was not formally Registered in the museum's records at that time.

The model remained in store for many years and was eventually forgotten. During the 1960s John Physick, a former curator, was alerted to the possibility that the model might still be in the museum, when he found a wood-engraved illustration, in a nineteenth century weekly journal, which showed the Albert Memorial Model displayed in the museum's North Court. Some years later the model was discovered in one of the stores. It was then accessioned, restored and exhibited in the 'Marble Halls' exhibition held at the V&A in 1973.

Historical significance: Scott considored the small-scale sculpted groups made by Armstead for the model to be at least as successful as the sculpture of the actual memorial. He later wrote in his memoirs,
'Without derogating from the merits of the sculpture as eventually carried out, it is but just to say that I doubt whether either the central figure or a single group, as executed, is superior to the miniature models furnished by Mr Armstead. They remain to speak for themselves; while the two sides of the podium and the four bronzes, which he designed, give a fair idea of what his models would have proved if carried out to the real size. I mention this in justice both to him and and to myself, as his small models were the carrying out of my original intention, and have in idea been the foundation of the result'.

The model was made by Farmer and Brindley of Westminster Bridge Road, London, a large firm who supplied marble and various types of architectural decoration to many architects. The sculptural decoration was modelled by Henry Hugh Armstead and the paper mosaics were added by Salvaiti & C.

This model, which has been recently conserved in the Museum's Conservation laboratories after being in store for a century, is temporarily placed here to mark the centenary of the completion of the monument in 1876.

On 14 January 1862, just one month after the Prince Consort's death, a public meeting was convened by William Cubbitt, the Lord Mayor of London, when it was resolved that a lasting memorial 'of a monumental and national character' should be built to the Prince's memory. Within one month some £33,000 had been recieved from subscriptions - later to be considerably added to - and after Queen Victoria had been consulted, and a site chosen, nine architects were invited to submit designs. Those submitted by Gilbert Scott were eventually chosen and after satisfactory estimates had been obtained from Messrs. Kelk, work on the foundations began on 6 May 1864. In 1872 the podium sculptures had been completed and the monument was thrown open to the public, but it ws not finally finished until 9 March 1876 when the statue of the Prince Consort holding the catalogue of the Great Exhibition, by Foley, was unveiled.

The model was made by Farmer and Brindley of Westminster Bridge Road, the whole of the decorative sculpture being modelled by H. Armstead. It is entirely of plaster, coloured and polished to simulate the actual materials to be used, and was placed on a large pedestal in one of the rooms in Buckingham Palace, where it 'proved extremely valuable for reference during the discussions which took place at the early stages of the work, when it was feared that it would be necessary to make considerable modifications both in the sculptue and ornamental details'. In 1867 Queen Victoria consented to the model being displayed in the Paris Exhibition of that year, and on its return it was sent to the Victoria & Albert Museum.

Sir Gilbert Scott later reflected that he 'ought to have exercised a stronger influence on the sculptors than I have done. My courage rather failed in claiming this, and I was content to express to them my general views both in writing and viva voce... . The sculpture had been drawn out in a general way on the first elevations, partly by Mr Clayton and partly by my eldest son. From these general ideas Mr Armstead made small-size models for the architectural model, and imparted to the groups a highly artistic feeling. Without derogating from the merits of the sculpture as eventually carried out, it is but just to say that I doubt whether the either the central figure or a single group, as executed, is superior to the miniature models furnished by Mr Armstead. They remain to speak for themselves; while the two two sides of the podium and the four bronzes, which he designed, give a fair idea of what his models would have proved if carried out to the real size. I mention this in justice both to him and and to myself, as his small models were the carrying out of my original intention, and have in idea been the foundation ofthe result'. [ca. 1976]
Henry Cole, the first director of this Museum, persuaded Scott to have this model made, and it was completed late in 1863 and coloured by March 1864. It was then displayed at Buckingham Palace to show Queen Victoria the exact form of the propsed Memorial to Prince Albert her late husband. The model was shown in the Paris International Exhibition of 1867 and afterwards presented to the museum.

Work started on the site in Kensington Gardens in May 1864 and the Memorial was completed in 1876. As exeuted it differs in a number of details from this model, for instance Albert holds the catalogue of the 1851 exhibition, rather than a scroll as here. The figure of Albert on the actual memorial ws originally gilded, but this was removed during the First World War so that the German airships would not be attracted by the moonlight glinting on the gilding. The statue was re-gilded in the recent restoration of the Memorial.

The complex sculptural programme of the Memorial includes four freestanding groups representing Europe, Asia, Africa and America. The smaller groups at the base of the columns represent Agriculture, Commerce, Manufactures, and Engineering. The reliefs below the statues contain portraits of sculptors, musicians, poets, architects and painters. The model also shows the elaborate polychromatic scheme of decoration which was executed in metal and mosaic. All the very best in the applied arts and architecture of the 1860s is represented in the Memorial as completed. [1998]
British Galleries:
Prince Albert died on 14 December, 1861. There was a sense of national loss and public sympathy for Queen Victoria, who went into mourning for many years. Within a month of his death a memorial was being planned and a committee was established to collect funds. The model was made so that Queen Victoria could view the proposed design in three dimensions. The memorial stands not far from this Museum, in Kensington Gardens, opposite the Royal Albert Hall. [27/03/2003] 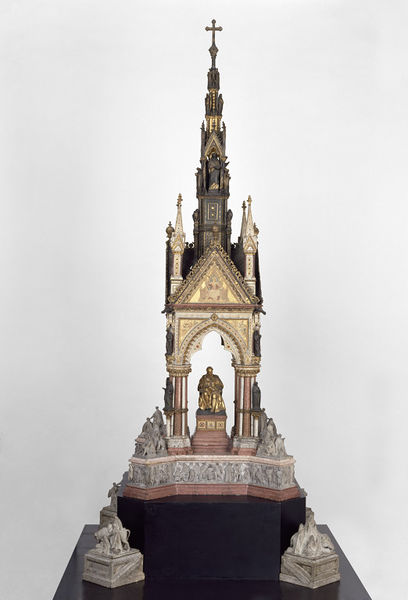