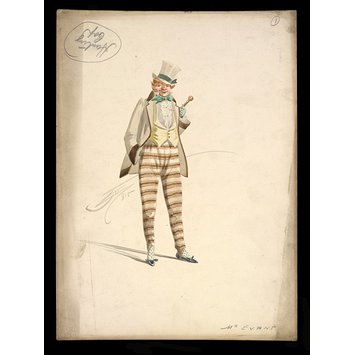 Costume design by Comelli for 'Mr Evans' in a production of Puss in Boots at the Theatre Royal Drury Lane, 1915. The comedian and singer Mr Will Evans (1866-1931) played the role of the Grand Duke (husband to the pantomime Dame part, the Grand Duchess of Cerulia). Will Evans was a well known for his Music Hall performances (for which he wrote many of his own songs and sketches) and made frequent appearances in the Drury Lane Christmas Pantomimes.

A production of Puss in Boots first performed at Covent Garden in 1817-1818, but was not a success. In 1832 another version entitled, Puss In Boots: or Harlequin and The Miller's Son was also performed at Covent Garden in which Eliza Povey (who played the role of the Miller's Son) was one of the earliest Principal Boys. These early productions were chiefly Harlequinades rather than the pantomime versions which are more familiar to modern audiences.

Drury Lane first produced Puss In Boots: or Harlequin and the Fairy Of The Golden Palms in 1859, and in 1868 the theatre produced Grimalkin The Great: or Harlequin Puss In Boots and The Miller's Son. They had more success with their sumptuous 1887 production, which as its title (Puss in Boots) suggests followed the 'rags to riches' storyline of the traditional fairytale.

These designs come from a production at the Theatre Royal Drury Lane in December of 1915 entitled Puss in Boots, (A fairy tale). The script was written by Geo.R.Sims, Frank Dix and Arthur Collins featured music composed and arranged by J.M.Glover. It starred Miss Renée Meayer as Puss in Boots. All the costumes we 'specially designed and supervised' by Comelli. The production was mounted during World War One when business was understandably poor for the theatre, with the result that the cast were actually asked to accept a half salary for the run. Fortunately the subsequent success of the show meant that it ran from December until Easter and the cast were eventually presented with cheques making up their salary to the full amount.

Comelli (1858-1925) was the house designer of the Royal Opera House from the late 1880s to the early 1920s. During this period he also worked for the Theatre Royal, Drury Lane and also designed costumes from a number of Gilbert & Sullivan productions.

This design comes from a collection of costume designs, some of which are costumier's copies, which were originally part of the Archives of the Theatre Royal, Drury Lane.

Costume design by Comelli for 'Mr. Evans' in a production of Puss in Boots, Theatre Royal Drury Lane, 1915. A watercolour costume sketch showing a man dressed in high waisted pantaloons striped in beige, pale orange and brown, white socks spotted with blue and a high cut pale yellow waistcoat. Over this he is wearing a loose beige overcoat trimmed with bands of dark brown at the hem, cuffs and centre front. He also wears a white frilled shirt, green necktie (tied in a large bow), green gloves and a biege top hat trimmed with a band of green around the hem. Under his left arm he is carrying a gold topped cane. The design is signed and dated Comelli, 1915.

Costume design by Comelli for 'Mr Evans' in a production of Puss in Boots at the Theatre Royal Drury Lane, 1915. Drury Lane Design Collection. 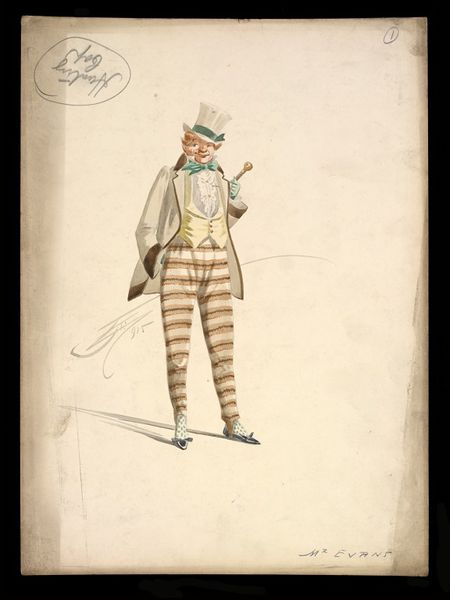