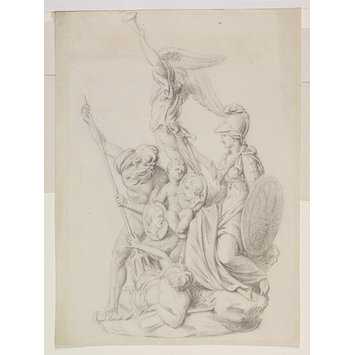 Design for a Monument to Two Naval Heroes, Captains Harvey and Hutt

This design by Joseph Nollekens in 1782 is for the front of a proposed monument for Westminster Abbey. It was to commemorate three naval captains, William Bayre, William Blair, and Lord Robert Manners who died in 1782 in the Battle of the Saintes that took place in April 1782 during the American War of Independence. It was a victory of a British fleet under Admiral Sir George Rodney over a French fleet under the Comte de Grasse forcing the French and Spanish to abandon a planned invasion of Jamaica. The battle is named after the Saintes, a group of islands between Guadeloupe and Dominica in the West Indies. Nollekens' only public commission, the design was rejected because of the expense of realising it. As a design for the first free-standing monument it and the ones for the back (E.465-2010) proved highly influential. They include a figure of Neptune that clearly derives from the sculpture by Bernini now in the V&A, that used to belong to Joshua Reynolds. This design shows the front of a sculptural group depicting Britannia, seated, the trumpeting figure personifying Fame, raised aloft, a genius, guardian spirit in Roman mythology, holding two busts on medallions, and Neptune poking his trident at a fallen figure at his feet symbolising the defeat of the French by the British fleet.

A design showing the front of a sculptural group depicting Britannia, seated, a trumpeting figure of Fame, raised aloft, a cherub holding two busts on medallions, and Neptune poking his trident at a fallen figure at his feet on a rectangular sheet of paper behind which is an additional piece of different paper that is attached at right angles to the back of the design.

'* / ?? Nollekins [sic] / First sketch for model for monument / ? 3 Captains monument in W. A. Nollekens . / Dwg in V&A's sketchbook in Ashmolean to check / against / a) But final design has 3 . medallions of following / page [three dots arranged in triangle meaning 'because'] very likely this work'
Written in pencil on a piece of wove paper attached to the back of the design

'SACKLER # 80.6.29'
This relates to the number of the object when it was in the Sackler collection. Written in pencil inside mount beneath design.

This was Nollekens' only public commission. This design is for the front of the proposed monument to three naval captains, who died in 1782 in the Battle of the Saintes, for Westminster Abbey. The design was rejected. As a design for the first free-standing monument it and the ones for the back (E.465-2010) proved highly influential. They include a figure of Neptune that clearly derives from the sculpture by Bernini now in the V&A, that used to belong to Joshua Reynolds.

Historical significance: 'Nollekens is best known as the leading portrait sculptor in Britain between 1770 and 1815, and as the subject of the biography Nollekens and his Times (1828) by J.T. Smith. With his fellow Royal Academicians Thomas Banks and John Flaxman he established the British School of sculpture following decades of dependence on immigrant sculptors (such as Rysbrack, Scheemakers and Roubiliac). Flaxman praised Nollekens as the only sculptor before Banks who had "formed his taste on the antique and introduced a purer style of art". As a draughtsman he was exceptionally well trained for his day. He is also noted as a collector; he owned the three wax reliefs by Giambologna now in the V&A. The V&A's collection includes three busts by Nollekens, five of his terracottas, his marble copy after the antique, Castor and Pollux (1767)and his original marble of Diana (1778).'

In the ca. 2009 edition of Gunnis's Dictionary of Sculptors in Britain, they are identified as 'Sackler priv. col.'

Attribution note: Nollekens' estimates were considered too high and this design was rejected. 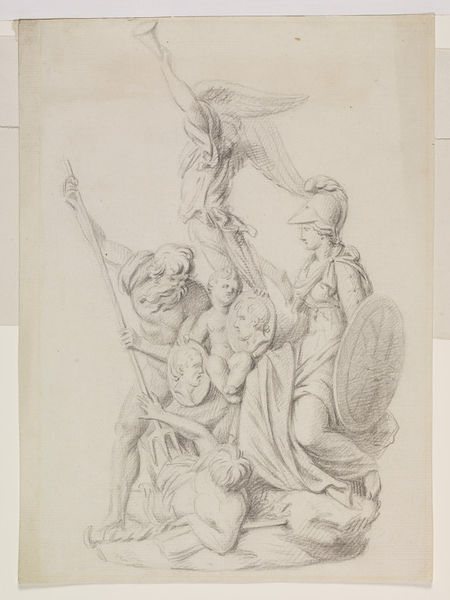