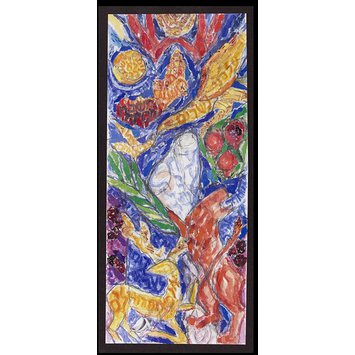 A rectangular colour photographic reproduction of a design for a stained glass panel mounted on a piece of stiffened black paper with wide margins at the sides and bottom. The design depicts a yellow stag bottom left, a rearing red lion bottom right, the scroll of the Torah in the centre, and an eagle feeding its young.

Colour photographic reproduction on paper, mounted on stiffened paper; computer printed title cut out and stuck to the mount

The main colours that Ruth Taylor Jacobson, the artist, has chosen are those suggested to Moses for the regalia of the High Priest: 'And he made the ephod of gold, blue, and purple and scarlet and fine twined linen' Exodus 39, v.2. In the centre of the window is an image of the Torah, the scroll unfurling: the artist drew it from an image of scrolls that had been torn and desecrated during the Kishinev pogrom of 1903. In her design, there are references to trees important in Jewish tradition. A gnarled, ancient olive-tree (whose fruit produces rich oil, giving sustenance to humans, physical and spiritual light) rises between the deer and the lion. To the left of the scroll, is the branch of a palm tree, (symbolising beauty and fruitfulness) to which there are many references in the Bible. It is one of the 'four species' carried in procession around the synagogue during the festival of Tabernacles. To the left of the scroll is a branch of pomegranates. The pomegranate has spiritual symbolism; its many seeds represent the six hundred and thirteen 'mitzvot' (religious duties) performed by observant Jews. In the lower right hand side is an image of a lion, symbolising the lion of Judah. The lion in this design grasps the trunk of the 'Tree of Life', and upholds the Scroll of the Law. To the left of the lion is an image of a stag, the stag is a symbol of Naphtali, who hurried back from Egypt to Canaan, to tell the aged Patriarch Jacob that his beloved son Joseph was still alive. The artist's inspiration for the stag in this design, which kneels, with one hoof raised, is from a brass Hanukkah lamp from Poland, in the V&A's collection.

Above the Torah is an image of an eagle which in the Jewish tradition is a metaphor for God's protection. And above the mother eagle (shown feeding her young) floats a vision of Jerusalem. To the left is the charred, destroyed city. In Jewish tradition, pillars symbolised the ancient Temple, and were often represented with a vine growing spirally upwards. In early illustrations these pillars had tear-drops painted on them, as if the ruins of the Temple were weeping for the Jews in exile, but later the tears become modified into grapes, a symbol of continuing growth and fruitfulness. The artist has included such a pillar on the left of her design, above the stag. Above the image of Jerusalem, is the sun, partially encircled by a crescent moon, with the inscription: 'The sun shall not smite thee by day, nor the moon by night.' Psalm 121, v. 6.

At the top of the window are hands held up in the gesture of priestly blessing. The motif is found in many contexts, notably on tombstones of Cohanim (priests) or on Mizrahim', indicating the east wall within a room, the direction towards which one turns to pray. In this design the hands take the form of flames. Within the flame-like hands is held a small menorah (candelabrum), a reminder of the Menorah created for Moses' tabernacle and several centuries later for the Temple of Jerusalem.

Rectangular colour photographic reproduction of a design for a stained glass panel mounted on a piece of stiffened black paper with wide margins at the sides and bottom.