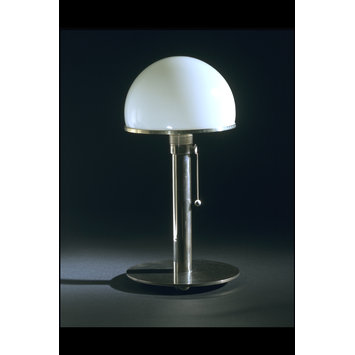 This lamp was one of the earliest manifestations of Bauhaus design principles. Right from the start this lamp was produced in two versions, one with a glass foot, one with a metal foot. According to Wilhelm Wagenfeld the earlier version was the one with the metal foot, executed shortly after Wagendfeld joined the Bauhaus metal workshops in 1923.

The first lamps were produced in the spring of 1924 according to the Bauhaus archives and by the autumn of that year at least eighty had been produced with a metal base and forty five with a glass base. Production of the lamp continued at the Dessau Bauhaus and from 1928 both versions were produced under licence by the Berlin firm of Schwintzer & Graff.

In 1930 Bunter & Remmeler in Frankfurt began producing a variant model and in 1931 Wagenfeld adapted his own design and a further version was produced by the firm "Architekturbedarf" in Dresden. A version of this lamp is still in production today and remains one of the most popular classics of 20th century design.

The circular plate which forms the base rests on three, regularly spaced, small hemispherical feet. The central support is a plain cylindrical column, fixed to the base plate by two threads and retained by nuts underneath. The shaft is surmounted by a sleeve, the upper half is threaded on which rests a three spoked frame supporting a hemispherical glass shade. The pull switch is of fine metal mesh, terminating in a ball finial and protrudes from a small, trumpet shaped aperture on the sleeve at the top of the column.

Two versions of this lamp were produced in the Bauhaus metal workshops between 1924 and April, 1925. One (MT9), on a circular glass base and with a transparent glass column, was designed as a collaborative exercise between K.J. Jucker and Wilhelm Wagenfeld. This version (MT8) with its metal base and column was designed solely by Wilhelm Wagenfeld. Which preceeded the other is problematic. An early Bauhaus publication, Neue Arbeten der Bauhauswerkstatten, (Munich, 1925) edited by Walter Gropius illustrates both models. The Jucker/Wagenfeld version is dated 1923-4 while the Wagenfeld metal version is dated 1924. Hans M. Wingler in The Bauhaus (MIT Press, 1969) confirms these dates whereas the Christie's catalogue for this sale states that according to Wagenfeld, the metal version was the earlier of the two. Nonetheless, it is clear that both models are virtually contemporary and show decisively the influence of the Hungarian, Laslo Moholy-Nagy who joined the Bauhaus as Form Master of the Metal workshops in 1923.

According to the Bauhaus Archives, the first lamps were produced in the spring of 1924 and by the autumn of that year, at least eighty had been produced with a metal base and forty five with a glass base. Production of the lamp continued after the move to Dessau in 1925 and in 1928, both versions, with slight variations were produced under licence by the Berlin firm of of Schwintzer & Graff. In 1930 Bunter & Remmler in Frakfurt began producing a variant too and in 1931, Wagenfeld modified his own design and another version was produced by the firm of Architekturbedarf in Dresden.

Moholy-Nagy fundamentally changed the teaching practice within the Metal Workshops. He reorganised it according to the brief given to him by Gropius "as a workshop for industrial design" (Bauhaus 1919-1928 New York, MOMA, 1938). He encouraged the students to concentrate on a geometric approach to formal problems rather than merely decorative solutions and to experiment with new materials. The results, particularly from such students as Marianne Brandt (see ashtray, VAM. M73&A-1988) and Wilhelm Wagenfeld have since become classics of Bauhaus production.

Wilhelm Wagenfeld (1900-1990) was initially trained as a goldsmith in his home town of Bremen and joined the Bauhaus in 1923. From 1927 until its demise in 1933, he was on the teaching staff. Since then he enjoyed a particularly distinguished career as an industrial designer. The Victoria and Albert Museum has a set of pressed glass containers, the KUBUS-GESCHIRR 1938 (C.154A-R,-1980) in its 20th century collections.

Originally this lamp was purchased by Carl Benscheidt, the owner of the Fagus Shoe Last Factory (built between 1911-1925), Alfeld an der Leine, Germany, which was the first major architectural commission for Walter Gropius after he left the office of Peter Behrens. It has subsequently come to be considered one of the most important buildings in the history of early 20th century architecture. This lamp is believed to have been used in Benscheidt's office at the factory. It passed into his daughter's hands who sold it to a German collector/dealer, Manfried Ludwig, who in turn sold it to the New York dealer, Barry Friedman. Friedman sold the lamp to an American collector, Al Luckett, in 1987 who then sold it back to Friedman (or consigned it) in 1988 so that it appeared in Friedman's Bauhaus exhibition of that year from which it was sold to the Dusseldorf dealer, Torsten Brohan. It was Brohan who consigned the lamp to the Christie's sale.

The collection of Bauhaus metalwork in the V&A nis small but nonetheless distinguished. In 1988 we were fortunate in being able to acquire a an ashtray by Marianne Brandt (M.73&A-1988) made in 1924; a very important piece from a most critical pewriod in the development of the Bauhaus. This lamp from the same period is, by its monumentality, considerably more important. Of all the designs produced by the Bauhaus, none is more beautiful or more emblematic of its principles. It hard edged, geometric design, subtle proportions and use of industrial materials suggest a Machine Age sculpture as much as a purely finctional lighting implement. The lamp has become an icon of not only the Bauhaus but of Modernism itself and in terms of both conception and realisation is a splendid exhibition piece

Nickel plated brass and milk coloured glass, Germany ca.1924, designed by Wilhelm Wagenfeld and made in the Bauhaus workshops at Weimar. 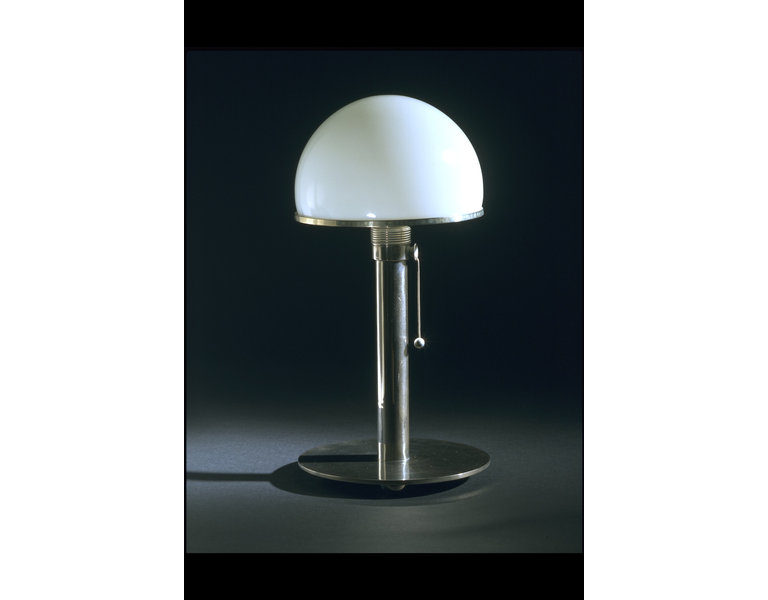