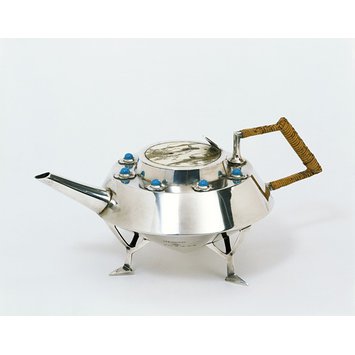 Christopher Dresser was appointed art adviser to the established Birmingham manufacturing silversmith and electroplating firm of Hukin & Heath (founded 1855) in about 1878, the date the first of his designs were registered by the company. The firm specialised in novelty items for the luxury market and they were anxious to find a new direction. In 1879 they set up a London showroom at 19 Charterhouse Street, round the corner from the Dresser and Holme warehouse, and exhibited the new designs there. In the same year the firm entered a mark at Goldsmiths’ Hall. A report in the Furniture Gazette on 23 August 1879 marked Dresser’s arrival: ‘The Firm have secured the services [of Dr. Dresser] in order to be reliable in point of design.’ Dresser’s strikingly original designs were stamped with a facsimile of his signature in addition to the firm’s maker’s mark. Fortunately, Dresser’s designs were registered at the Patent Office, since the firm’s design books, in which they were also recorded, were destroyed in the 1950s.

Christopher Dresser (1834-1904) was one of the most distinguished graduates of the Government School of Design in the 19th century. He was the first independent industrial designer in the sense that he worked for a large and varied number of manufacturers. In his long career, as well as supplying designs for silver, plate, furniture, ceramics and glass, Dresser was also a prolific designer of textiles, carpets and wallpapers for leading firms such as Warner & Sons, Crossley & Co. and Jeffrey & Co. among many others. He also designed cast iron for the Coalbrookdale Company. Dresser’s grounding in botany whilst still a student encouraged his adoption of an analytical, systematic and quasi scientific approach to such topics as colour and proportions. His moral objection to dishonesty in design is a common cause with many Victorian design theorists including A.W.N. Pugin whose work Dresser admired. He also advocated refinement of finish and was fully attuned to the needs of machine production. Some of Dresser’s metalwork, exhibits strikingly rigorous and stark forms, in astonishing prefigurement of the Bauhaus manner but his style is better understood as an extreme version of High Victorian Aestheticism.

This teapot has been designed to incorporate a Japanese ivory medallion embellished with lacquer and enamel which Dresser probably brought back with him from his visit to Japan in 1876-7.

The body circular, the lower section an inverted cone supported by three, equally spaced feet; the upper section of the body, a circular wall sloping inwards surmounted by a flat, circular band decorated with seven, equally spaced enamelled beads on silver, coloured turquoise, mounted in circular, stylised flower settings. The opening encircled by a narrow, plain wall. The lid, detachable, is circular piece of elephant ivory decorated in Shibiyama style, depicting cranes flying over a lake, an enamelled dragonfly and mother of pearl rock and bull rushes. It sits in a silver frame with a triangular thumb piece with two incised lines attached to the side. The spout is a tapered cone attached to the front; the square handle, rush covered is attached to the rear, the upper end a right angled junction, the lower end attached directly to the body.

Andrew McIntosh Patrick was the Managing Director of the Fine Art Society, 148 New Bond Street, London W1Y 0JT for 30 years until 2005. Between 1972 and 2005, he acquired a collection of metalwork designed by Dr. Christopher Dresser of approximately 50 pieces which until the sale of his collection by the Edinburgh auctioneers, Lyon & Turnbull on April 19, 2005, was the most distinguished collection of such material in either a public or private collection.

Teapot, silver, ivory and enamel set with turquoise, enamel beads, designed by Christopher Dresser and made by Hukin and Heath, Britain (Birmingham) 1878-9 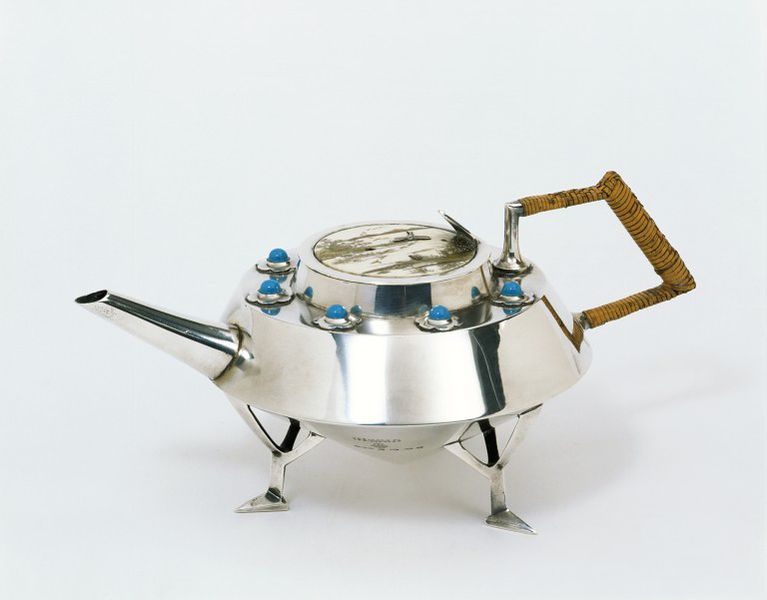