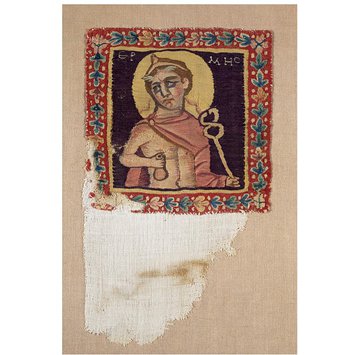 This square panel, tabula, for the shoulder or skirt of a linen tunic, was applied to the main garment after it was woven, and fragments of the linen remain attached to the piece. Originally another panel, a companion to Hermes, would also have decorated the tunic.

Hermes is traditionally associated with the messenger's wand which he holds in his left hand, having been appointed herald by his father Zeus. The purse in his right hand is a symbol of commerce, Hermes being the god of gain and riches as well as messenger of the gods and guide to travellers. Figure subjects depicted on textiles at this period were almost invariably drawn from Greek and Roman mythology, but Christian Coptic influences can be detected in the figure, and the large soulful eyes. Although the representation of heathen deities on garments was officially suppressed at the end of the 4th century, their portrayal diminished only gradually. The eastern Mediterranean and Egypt were still strongly influenced by cultural and iconographic traditions inherited from Hellenistic and Roman times, especially among traditionally educated aristocrats and wealthy citizens who were, largely, the owners of elaborately decorated textiles.

Slit tapestry-woven panel (tabula) of polychrome wool on a linen warp, attached to the remains of plain woven linen. Within a floral border, the god Hermes is represented. His name is indicated in Greek characters to either side of his head, EPMHC. He is clothed in a pink chlamys, or short cloak, and on his head is a petasus, or winged cap, surrounded by a nimbus. In his left hand, Hermes holds a caduceus, the messenger's wand and the other hand holds a purse. Purple ground with border of red ground.

Construction and use
Tapestry pieces like this one were probably produced in series in a specialist workshop. Contrary to the usual practice of the time, such squares were not woven directly into the ground but treated like emblemata in mosaic art; they were produced separately and subsequently applied, that is, sewn on.This square panel, tabula was for the shoulder or skirt of a linen tunic, and was applied to the main garment after it was woven. Fragments of the linen of the base textile remain attached to the piece. It is also possible that the panel could have come from a furnishing of some sort (see 269 & 270-1889).

Subject and depiction
In classical Greek mythology, Hermes was messenger of the gods, god of travellers, and of gain and riches. His most familiar attributes are his winged helmet and messenger's wand (here carried in his left hand). The purse in his right hand is a symbol of commerce. Hermes was appointed herald by his father Zeus. The depiction has elements of both a classical and Christian Coptic nature. The character and his costume reflect Hellenistic iconography, while the figure and the large soulful eyes give a foretaste of the later fully developed Coptic style. The floral border still retains some elements of classical naturalism, but there is tendency towards a more stylised and cruder form which is typical of the transitional period in textile design between the Graeco-Roman and Coptic eras.

Figures depicted on textiles at this period were almost invariably drawn from Greek and Roman mythology. Although the representation of heathen deities on garments was officially suppressed at the end of the fourth century, their portrayal diminished only gradually. The eastern Mediterranean and Egypt were still strongly influenced by cultural and iconographic traditions inherited from Hellenistic and Roman times, especially among traditionally educated aristocrats and wealthy citizens who were the main owners of elaborately decorated textiles. The Christian doctrine of salvation was at first at least partly interpreted in a cosmological way: thus Christ was equated with Dionysos or Nilos, divine powers that guaranteed prosperity and thus steady renewal. Age-old ideas about magic were alive particularly in clothing ornaments that aimed to offer protection from evil powers and to attract beneficial ones.

Excavation
The majority of the small woven ornaments were removed at the time of excavation from the costumes and hanging to which they were originally attached, giving a distorted impression of the range and size of the textiles which existed in the Late Antique and Coptic periods. The term Coptic, however, refers to native Egyptian Christians, while the design and imagery of these textiles can only very rarely be attached to an unequivocally and narrowly Christian-Coptic context.

Series of two or four pieces of this type are known, forming iconographic ensembles on the tunic, such as the four seasons, or mythological couples. It is likely that tapestry panel 652-1886, which depicts Apollo, is this panel's counterpart.

Context for collecting
The Registered papers indicate the competition between collectors wishing to sell Egyptian textiles to museums. The main players cited in the context of this collection from Mr Wallis were Graf and Brugsch Bey, and the collector Dr Bock clearly was au fait with all of them. Originally, Mr Wallis has thought of selling the textiles in Paris when the Museum declared its interest because they were of 'the greatest interest as much from the decorative as from the archeological point of view'. The 'figure and animal subject were more numerous and more interesting than those in the collection lately offered to us by Mr Graf who wanted £1800 for 2000 pieces and refused to let us buy a portion of those submitted to us....' Evidently at the point at which Graf offered his collection, Dr Bock had brought the collection of Brugsch Bey in Cairo to the notice of the Museum. The Museum had failed to acquire 376 pieces sent by Graf because of an anticipated reponse from Cairo. Graf was only prepared to wait one day for an answer to his offer (T.C, 28/08/1886 in RP5351).

Found in a burial site at Akhmîm (Panopolis) in Upper Egypt. 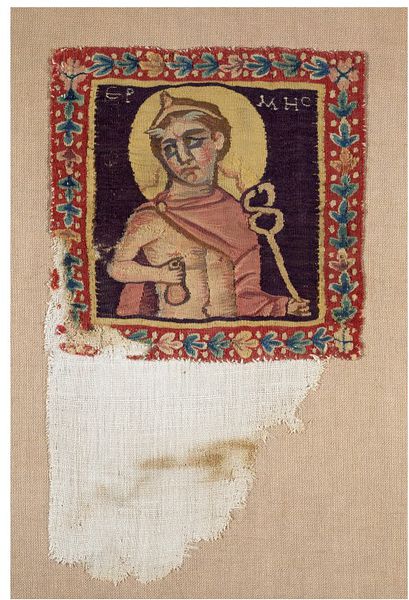