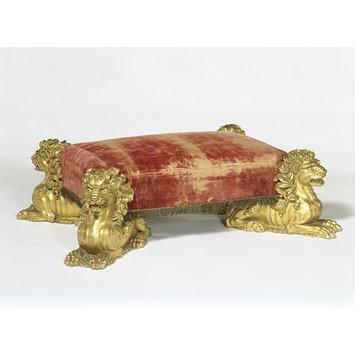 Made for use with the St Edmund footstool in Westminster Abbey for the coronation of George IV in 1821. The history of the stool between 1821 and 1991 is unrecorded. The Lord Chamberlain, Lord Hertford, did not claim it as a perquisite, as was traditional, in 1821. Sir George Naylor published an illustrated record of the Coronation of George IV which included drawings of St Edward's Chair and the present footstool (p. 45, 1837 edition).

The footstool was supplied for the Coronation of George IV at Westminster Abbey on 20th July 1821. It is possible that it was designed by Benjamin Dean Wyatt, Surevyor of the Fabric for the Abbey betweeen 1813 and 1827. The carved lions were intended to match those on St Edward's Chair (the Coronation Throne), the restoration of which was carried out at the same time by Wyatt's cousin, Edward Wyatt.

The original invoice from Bailey and Saunders survives in the Lord Chamberlain's papers in the PRO (LC 2/5, fo. 39):
To a richly carved footstool, with Lions to Correspond
with saint Edward's chair, Stuffed in Canvas
& covered with white Calico £39 18s
To covering ditto with the Office Gold Tissue correspond £1 2s
To making a loose Cover for ditto 8s
To a brown holland Cover for Ditto 9s6d 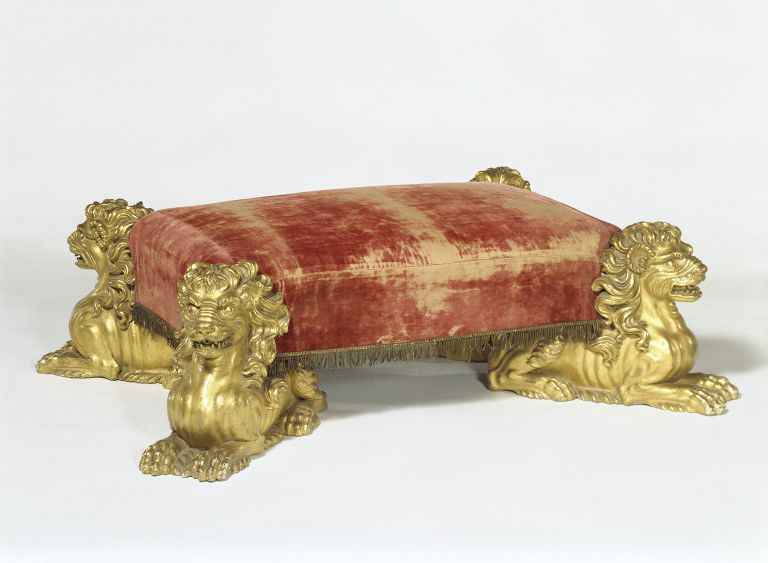