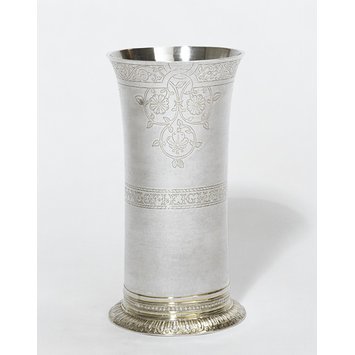 This is one of a set of four beakers presented by a Norwich merchant, Richard Browne, to the Dutch Church in Norwich (now St Andrew's Hall). It has been kindly lent to the V&A by the Ashmolean Museum, Oxford, where a second beaker from the set survives. The two remaining beakers are in the Norwich Castle Museum and the Rijksmuseum, Amsterdam.

Beakers were less commonly used in post-Reformation 16th century England for administering communion wine than cups. However, Browne's gifts would have been entirely appropriate for use in a Dutch church in East Anglia as the Lutheran churches of the Netherlands enjoyed widespread use of this form of communion vessel. The Dutch community played a major role in the life of Norwich from the mid 16th century. By 1571 numbers of foreign merchants and craftsmen settled in Norwich amounted to nearly 4,000, the largest group of whom were Dutch.

Silver beaker, of cylindrical form, with slightly flaring lip. The spreading foot has traces of gilding and is stamped with decorative devices. The upper body is engraved with a band of strapwork, stylised flowers and roses, beneath which is a presentation inscription.

Marks stamped under base: town mark for Norwich, maker's mark of William Cobbold

Inscription engraved around body: THE GIFT OF Mr RYCHARD BROWNE OF HEIGHAM

One of four beakers presented by Richard Browne (possibly the Norwich merchant who died in 1595 while serving as sheriff), to the Dutch Church (now St Andrew's Hall) in Norwich. A second beaker from the set is also in the collections of the Ashmolean Museum, Oxford. The two remaining beakers are in the Norwich Castle Museum and the Rijksmuseum, Amsterdam.

Historical significance: An example from a rare surviving set of four communion beakers with a known English provenance.

The Reformation in England
On the eve of the Reformation, churchgoing in England was a colourful, sensory experience, rich in ceremony. In the 1530s, however, Henry VIII threw off the authority of the pope. Under his successor Edward VI (reigned 1547–53) major changes in worship and church decoration were introduced.

English Reformers wanted a return to a simpler, more direct form of worship. Their boldest move was to reject the Roman Catholic belief in ‘transubstantiation’, in which the bread and wine are miraculously transformed during the Mass into the body and blood of Christ. They proposed instead a symbolic service of shared communion, conducted in interiors stripped of distracting furnishings and images. The congregation would play an active role in the communion, regularly taking wine as well as bread, whereas before they had been chiefly spectators.

Crown commissioners confiscated or destroyed much of the goldsmiths’ work of the medieval church. Some parishes concealed or sold their silver before the commissioners arrived, but by the early 1550s, many were left with just a single cup and paten. Some churches had no precious metal at all.

Consolidation
The success of the Reformation by 1600 owed much to an ingrained culture of obedience to the crown. During the brief reign of Mary I (1553–8) England returned to Catholicism, but under Elizabeth I it swung back to Protestantism, spurred on by state propaganda that Catholicism represented a political threat. Even so, this rupture with the past met with quiet resistance as many people were attached to the old faith and its trappings.

To consolidate this break with traditional religion, the church authorities launched a programme from about 1560 to replace the ‘old massing chalices’ with ‘decent’ communion cups of prescribed design. This gave a massive boost to the goldsmiths’ trade and the great demand led to the formal establishment of assay offices outside London, at Chester, York, Norwich and Exeter. About 2000 communion cups from the period survive.

Beakers were less commonly used in post-Reformation 16th century England for administering communion wine than cups, unlike the Lutheran churches of the Netherlands where there was widespread use of this form of communion vessel. Browne's gifts would have been entirely appropriate for use in a Dutch church in East Anglia. The Dutch community played a major role in the life of Norwich from the mid 16th century. By 1571 numbers of foreign merchants and craftsmen settled in Norwich amounted to nearly 4,000, the largest group of whom were Dutch.

During the Reformation, beakers were sometimes used instead of cups to serve the consecrated communion wine. Some survive in England but they were more common in the Netherlands. This silver beaker is one of four given to the Dutch Calvinist church in Norwich by Richard Browne, a local merchant with contacts in the city’s thriving Dutch community. 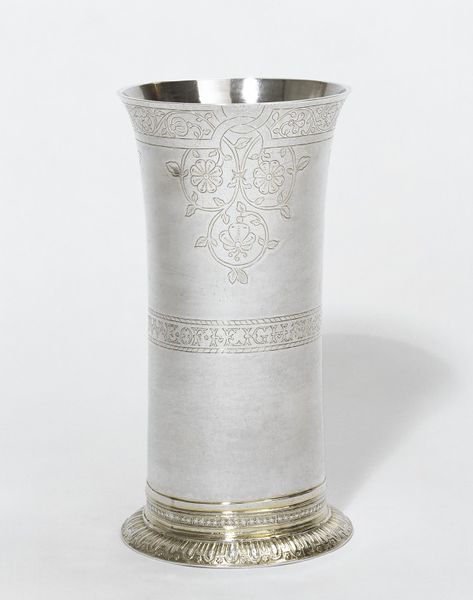