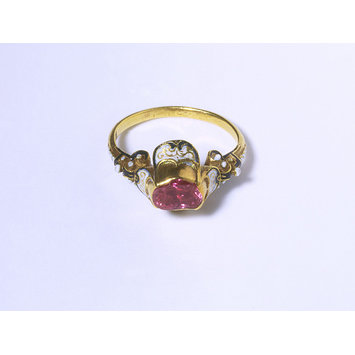 This ring is decorated with a Renaissance quatrefoil or four-petalled bezel finely decorated with black and white enamel. 'Blackwork' enamel first appeared around 1585 and remained in fashion until the 1620s. It consisted of patterns of small curved and broken scrolls against a black or white enamel ground, contrasting with the bright enamels popular earlier in the sixteenth century.
It is set with a pink sapphire. Sapphires and rubies are both varieties of the gem mineral corundum. The rich red colour of rubies is created by the presence of chromium whilst sapphires may be found in a range of colours from colourless natural corundum to yellows, pinks, greens and the most highly prized blues. The term ruby was used in this period to describe a number of red stones including garnets, spinels and pink sapphires. It is possible that the original owner of this ring believed the stone to be the highly prized ruby, a stone valued for its rarity, beauty and talismanic or magical qualities. The sixteenth century owner may have believed that a ruby would protect him or her from perils, including the loss of land and rank, as well as demonstrating his or her status and good taste.

Gold ring, the quatrefoil bezel with sides chased as drooping petals and enamelled. The ornament comprising scrolls on a background of white opaque enamel with borders of black opaque enamel. The plain hoop terminates in scrolled shoulders decorated with black and white enamelled strapwork. The bezel is set with a large, irregularly-shaped foiled pink sapphire. The stone does not fit perfectly in the setting, and may be a replacement.

Historical significance: During the Renaissance, the ring developed from the simple forms of the medieval period into a miniature work of art, combining the skills of the chaser, engraver and enameller as well as the stone cutter. Quatrefoil bezels with engraved and enamelled petals developed from medieval cusped bezels and were complemented by elaborately chased and enamelled shoulders. 'Blackwork' enamel first appeared around 1585 and remained in fashion until the 1620s. It consisted of patterns of small curved and broken scrolls against a black or white enamel ground, contrasting with the bright enamels popular earlier in the sixteenth century.
Cabochon settings remained in use but developments in stone cutting saw the increasing use of table cuts, especially for diamonds and rubies.In the Renaissance, the term 'ruby' could be applied to a number of red coloured stones, including garnets, spinels (known as balas rubies in the medieval period) and possibly pink sapphires. 'Sapphire' describes any variety of the mineral corundum, excluding rubies which take their rich red colour from the presence of chromium. Sapphires may be found in a range of colours ranging from colourless pure corundum to yellows, oranges, pinks, greens and the most characteristic blues. Varying amounts and combinations of chromium, titanium and iron cause these colour variations.
Rubies were highly valued in the Renaissance period. According to Benvenuto Cellini in his 1568 'Treatise on Goldsmith's Work', 'a ruby for instance of five grains of wheat and of as fine a fire as you could wish, would be worth about 800 golden scudi and an emerald of the same size and beauty would run to about 400, similarly a diamond would be worth 100 and no more while a sapphire would fetch about 10'. The colour of a stone could be improved and flaws disguised by the skilful use of coloured foils behind the stone. Rubies were valued for their talismanic virtues as well as their beauty. According to Sir John Mandeville's 1561 lapidary, the owner of a ruby would live in concord with all, would never suffer the loss of land or rank and would be preserved from all perils.

Gold ring with quatrefoil bezel and double cusps, enamelled in black and white, and set with a pink sapphire. Western Europe, ca. 1550 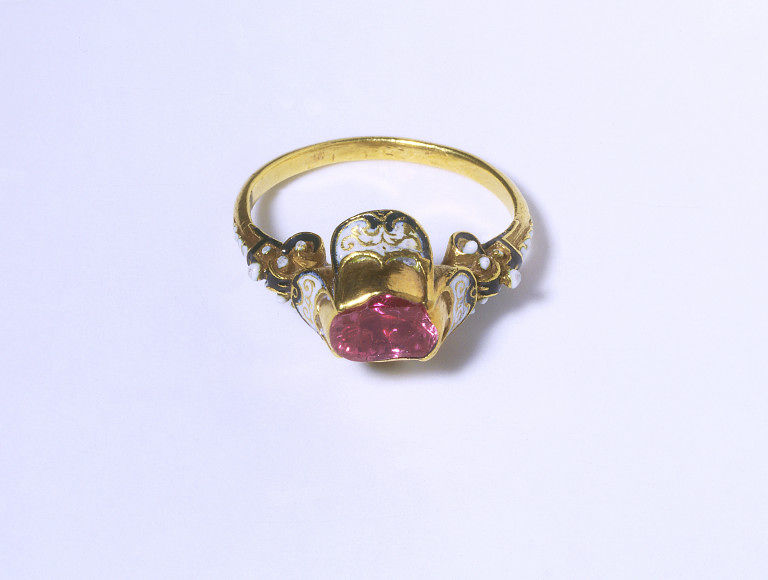