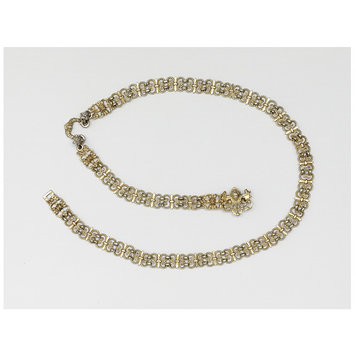 This attractive silver gilt girdle may have been given to a bride by her bridegroom as a wedding gift, symbolising her new domestic responsibilities. The hook on the right hand side could have been used to hang the household keys or a purse, pair of scissors or other small personal items. Similar examples have been found in collections around Northern Europe, showing that it was a common item in the dress of a relatively wealthy woman.

Silver-gilt girdle composed of a series of double scrolls connected by rings, the clasp is chased with a cherub's head, at the side is a loop to hold the purse. The sections at each end, the clasp and the sections on either side of the purse loop are cast of a different coloured metal and of a different design, incorporating an imitation of a point-cut diamond and may have been made in a separate part of the workshop.

Girdles and belts were an essential part of both male and female dress. They could be made of leather, rich textiles mounted with metal mounts or from the late thirteenth century, entirely of precious metals. In 1296, the accounts of the Tyrol court contain the record of a 'gold girdle of gold everywhere' and a 'girdle entirely of silver', further references from the courts of England, Artois, Portugal and Carinthia record other solid metal girdles, although these were always less common than the textile or leather sort, perhaps because of their weight and expense (Lightbown, 1992). However, during the sixteenth century, although men continued to wear leather belts, the fashion for women moved towards metal belts, often of silver or sometimes, gold.

Girdles served a practical as well as a decorative function, being used to suspend purses and pockets, keys, knives, prayer books and other small items. Girdles such as this are thought to have been used by brides, symbolising their new domestic responsibilities.
Comparable examples can be found in German collections in Munich (Stolleis, 1977, cat.74), Köln (Chadour & Joppien, 1985, cat. 354, 355) and in Danish hoards (Lindahl, 1988, cat. 10, 21, 29).

The V&A possesses a German painting of a woman wearing a similar girdle, dated 1582 (museum number 4833-1857). There is also a 1634 painting from Frederiksborg of Sophie Høeg wearing a plainer metal girdle (Lindahl, p.59). An engraving from the late 1560s, also illustrated in Lindhal, shows a richly dressed woman wearing a belt from which hangs a purse and other personal items.

Girdle of cast silver-gilt, a series of double scrolls connected by rings with a cherub's head chased on the clasp, Flemish, 16th century 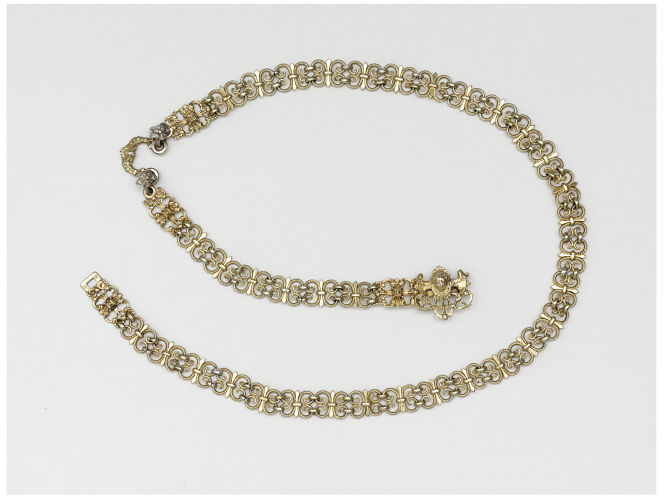